Bernie Sanders urged his fans Monday to vote for Hillary Clinton, but his supporters responded with a chorus of boos that highlighted the depths of Democratic disunity.

“We have got to defeat Donald Trump. And we have got to elect Hillary Clinton and Tim Kaine,” Sanders told supporters just hours before the Democratic National Convention kicks off here. The faithful, who crowded into a Philadelphia auditorium to hear the Vermont Senator tout the campaign’s successes, responded with jeers.

Among the achievements Sanders celebrated was the resignation Sunday of Democratic National Committee chairwoman Debbie Wasserman Schultz, who announced she would step down at the conclusion of the convention in the wake of an email hack that suggested she and her staff had improperly sought to influence the outcome of a long and bitter primary.

Wasserman Schultz’s resignation “opens up the possibility of new leadership at the top of the Democratic Party,” Sanders said to deafening applause. “That will open the doors of the party to those people that want real change.”

As Sanders addressed the crowd, news broke that Wasserman Schultz would no longer gavel open the convention, according to the Associated Press.

Speaking in shirtsleeves on a hot afternoon, Sanders offered a taste of the economic populism that carried him to 23 victories in primary and caucus contests.

“We have set the agenda for the future of America,” Sanders told supporters, touting platform victories on issues such as a $15 minimum wage and rules changes that slightly curb the influence of the party’s so-called super-delegates. “Despite the fact that our people were a minority on the platform-writing committee, we came out of that committee with by far the most progressive platform ever written in the Democratic Party.”

Sanders will be one of the keynote speakers Monday night as the convention opens at Philadelphia’s Wells Fargo Center. 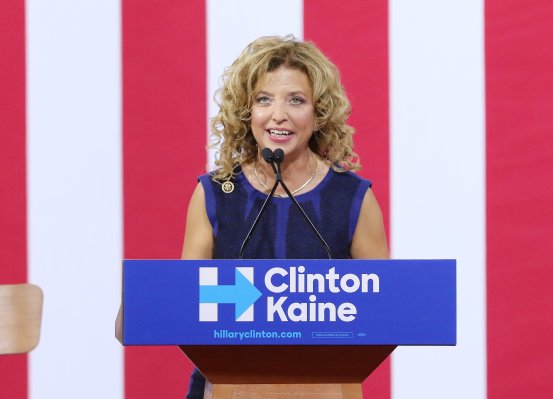