Why Climate Negotiators Have Turned Their Attention to Your Air Conditioner

EU Commissioner Miguel Arias Canete and US Secretary of State John Kerry shake hands at the first day of high-level talks at the Extraordinary Meeting of the Parties to the Montreal Protocol on July 22, 2016 in Vienna, Austria.
Hans Punz—AFP/Getty Images
By Justin Worland

Climate negotiators meeting in Vienna over the weekend laid the groundwork for an agreement to stem emissions of global warming-causing hydrofluorocarbons—known as HFCs—that some environmental experts say could be the most significant advance in fighting global warming this year.

An agreement is finally in sight after seven years of talks on the topic, negotiators said following meetings. They expect the accord to be finalized at a conference in October during a conference in Rwanda.

“Amending the Montreal Protocol to phase down HFCs is one of the single most important unitary steps that we could possibly take at this moment to stave off the worst impacts of climate change and to protect the future for people in every single corner of the globe,” said U.S. Secretary of State John Kerry at the conference.

Emissions from HFCs—often found in air conditioners and refrigerators—contribute much less to climate change than carbon dioxide when considered in aggregate. But, on a pound for pound basis, they are thousands of times more potent. Making matters worse, use of HFCs is on the rise as manufacturers continue to use it as an alternative to ozone-depleting chemicals that phased out by the 1987 Montreal Protocol.

Research shows that following through on a strong agreement could single-handedly prevent 0.5°C (0.9°F) in temperature rise by 2100. That would represent a significant step toward achieving last year’s landmark Paris Agreement, which sought to keep temperature rise to 2°C (3.6°F) by 2100—ideally lower.

The timeline remains the primary disagreement for negotiators coming out the meetings in Vienna. Some developing countries say that they would be unfairly burdened by a requirement for a quick switch away from HFCs to costlier alternatives. A group of 100 countries, including the U.S., the European Union and Japan as well as some developing countries, has called for growth of use of HFCs to peak by 2021. On the opposite end of the spectrum, India has called for a 15-year period before growth stops in 2031, according to a Natural Resources Defense Council blog post.

Resolving those differences could make a significant difference in meeting the 2°C goal—a level scientists say represents the level where the world will experience the worst effects of climate change. “Climate change is happening and it’s happening faster than most of us anticipated,” Kerry said. “The Paris agreement is not a silver bullet.” 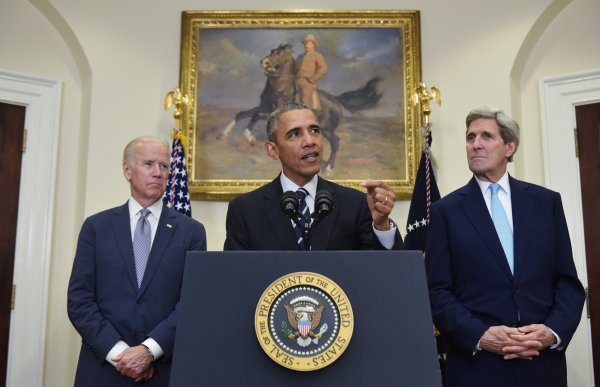 Does Obama Want to Keep Fossil Fuels in the Ground?
Next Up: Editor's Pick