Democrats are promising a radically different tone at their convention from the “doom and gloom” of the GOP gathering in Cleveland last week.

Clinton campaign manager Robby Mook told reporters Monday that the Democratic National Convention would be a study in contrast, after Donald Trump used his acceptance speech to lay out a grim picture of the U.S.

Mook subtly mocked signs of disunity at the GOP convention, including Sen. Ted Cruz’s decision not to endorse Trump in his speech, Ohio Gov. John Kasich skipping the convention in his home state and the drama over the party rules that erupted on the convention floor.

“Sen. Bernie Sanders has already endorsed Sec. Clinton, he is coming to double-down on that endorsement,” he said.

But Clinton spokesman Brian Fallon told reporters that the convention would feature a full roll call vote of all delegations on Tuesday for president—a nod to Sanders supporters who wish to have their preference registered.

“It is exactly in keeping with our philosophy that every vote should be counted and that means every delegate being counted on the floor of the convention,” Fallon said. He said he was unsure whether the same would be done for the vice presidential nomination—which could be used by progressives to express opposition to the selection of the more moderate Sen. Tim Kaine.

Mook said the Clinton campaign had nothing to do with Wasserman Schultz’s decision to step aside.

“This was the chairwoman’s decision,” he said. And Fallon expressed hope that Democratic delegates “will be respectful” of her on the floor when she gavels the convention to order Monday afternoon, noting she had already taken the step of resigning before the end of her term.

Mook refused to say whether the Clinton campaign is vetting Sanders’ speech.

He also encouraged reporters to ignore surveys showing Trump with a convention bump following his acceptance. “I would suspend any polling analysis until after our convention,” he told reporters. 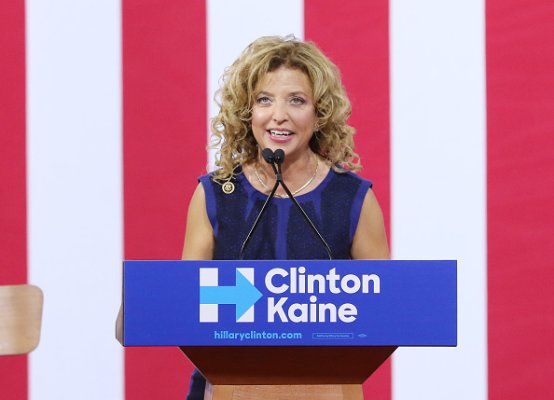 Clinton Campaign Boss: DNC Chair Had Become a 'Distraction'
Next Up: Editor's Pick