One Month After Brexit Vote, Europe Still Divided on Britain

Britain’s courtship of the European Union was a long one, with the U.K. joining what was then the European Economic Community in 1973, more than 15 years after its founding. And now hopes for a quick divorce are also fading, as Europe’s leaders brace themselves for months of difficult diplomacy even before official proceedings to separate Britain from the union begin.

Donald Tusk, one of the E.U.’s three presidents, told British Prime Minister Theresa May that he was hoping for a “velvet divorce”, referencing the peaceful transition from communism in the Czech Republic in 1989 known as The Velvet Revolution.

But that is optimistic. Already Tusk has clashed in his approach with the leaders of the other E.U. institutions, and mixed messages are also emerging from European capitals.

Divides were apparent from the day after the seismic vote of June 23, when the British public signaled its desire to become the first full E.U. member to withdrawn from the bloc. European Parliament leaders were unequivocal: Britain must immediately trigger Article 50 of the E.U. treaties which starts a two-year process of negotiations leading to an exit.

But British politicians prevaricated. First they needed to mend divisions within the Conservative Party, find a new leader to replace David Cameron as Prime Minister, and work out exactly what future relationship they wanted to negotiate with the E.U.

And after initial panic at the financial turmoil died down and worries about encouraging anti-E.U. sentiment in other countries appeared unfounded, some leaders too began to see the benefits of a more orderly and rigorous process. Chief among them was German Chancellor Angela Merkel, widely perceived as the most powerful and influential leader in Europe.

“The Merkel position is quite smart and quite useful – not to rush into this,” says Jan Techau, the director of the Brussels-based Carnegie Europe think tank. “If the E.U. named a negotiator now in a rush and the UK triggered the process it would be a huge mess because nobody would really know in which direction to steer.”

Merkel underlined her preference for the slow-and-steady approach when she met May for the first time on July 20th in Berlin, and the pair seemed to reach a consensus that Britain would not trigger Article 50 until some point in 2017.

“I find it absolutely understandable that there is a certain amount of time needed,” Merkel said at a joint press conference with May. “No one wants this to be up in the air… we all have an interest in this matter being carefully prepared, positions being clearly defined and delineated.”

This however puts her at odds with others in the E.U. While Merkel has allies in The Netherlands, Austria and in some central and eastern European nations which share sympathies with the issues which pushed Britain to leave, another faction remains hostile. The reception was frostier when May followed her visit to Berlin with a trip to Paris the next day.

“We do understand that your government, which has just been formed, needs this time, but again the sooner the better is in the common interest,” French President Francois Hollande told her.

Other governments pushing for a speedier divorce on the grounds that delay simply creates more uncertainly include Belgium and Luxembourg, and they have an ally in Jean-Claude Juncker, the President of the E.U. executive branch, the European Commission.

Since the June referendum, Juncker has taken the stance of the jilted partner in a failed relationship, with comments explicitly blaming Cameron for the Leave vote. Juncker has banned diplomats in his Commission from any “secret negotiations” with Britain before they trigger Article 50, taking a much harder line than his fellow President, Donald Tusk.

The reality, however, is that no one can force Britain to start the exit process until they are ready. And many E.U. leaders know that the negotiations will be bitter, difficult and could provoke tensions at home. With elections in France and Germany next year, Merkel and Hollande are keen to avoid any topics which could foment domestic discontent.

The issue of migration will be crucial. Europe’s leaders are united on one point: Britain cannot retain access to the E.U. single market unless it also accepts the presence of E.U. workers. This is going to be the most fiercely-debated aspect of the divorce, and a report in Britain’s Observer newspaper on Sunday suggesting some countries were in favour of giving the U.K. an exemption from the freedom of movement rule sparked swift outcry.

Guy Verhofstadt, the former Belgian Prime Minister and leader of the bloc of Liberal members of the European Parliament, called it “unthinkable” and “mad.” “Do we really want eurosceptics elsewhere in Europe to invoke the British example of ‘having their cake and eating it’?” he asked.

More than a month may have passed since Britain stunned Europe with its vote to leave the E.U., but the positions across Europe remain divided as ever. It is not only Britain, it seems, which needs a bit more time to gets its house in order. 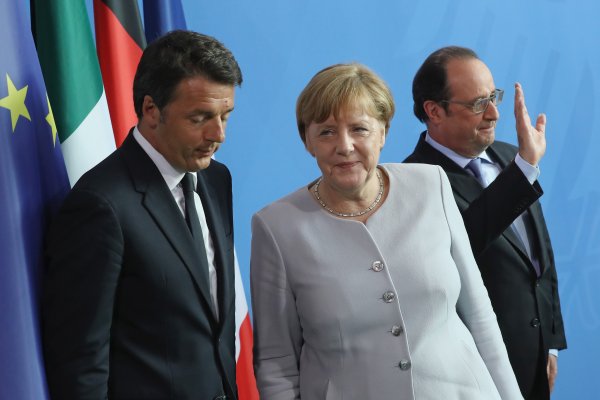