Protesters yell during a demonstration in downtown on Sunday, July 24, 2016, in Philadelphia.
John Minchillo—AP
By Charlotte Alter

Good fun could be had by all at a carnival-themed event hosted by the Republican Party in Philadelphia Sunday. There were bean-bag throws, a prize wheel and even a jumbo-sized version of Connect Four. One problem: the games were rigged so that Hillary Clinton won every time.

That’s because the Republican Party was targeting a new voter base: ultra-liberal Bernie Sanders supporters. Trump laid out his pitch to Sanders voters in his acceptance speech at the RNC in Cleveland last Thursday, and continued his overtures in a series of tweets over the weekend. But the wooing has intensified in light of the leaked DNC emails that appear to show Democratic party officials favoring Clinton, a preference which Sanders supporters had long suspected.

“The Republican party is the only party giving an actual voice to the grassroots,” said RNC Chairman Reince Priebus Sunday, adding that Donald Trump “wants to give a voice to people across this country who are sick of special interests calling the shots.”

Campaign manager Paul Manafort tried to cast Trump as a Bernie-like figure, an outsider against the Clinton establishment. “We are the change,” he said. “The establishment, the people that created the problems, are represented by Clinton and Kaine.”

Manafort also slammed Bill Clinton’s support for NAFTA, which he called “one of the primary contributors to the loss of jobs throughout this campaign.” Opposition to free trade is one of the few major policy positions shared by Sanders and Trump supporters. Both Trump and Sanders fared better in heavily white states, and the Trump campaign is betting that those demographics will work in their favor. “Sanders voters are demographically our voters,” said one senior Trump aide.

They also have their anger in common. To the more than 1,000 Bernie Sanders supporters who flooded the hot streets of Philadelphia for a massive demonstration Sunday, the DNC email leak was perfectly timed. “If I had to vote for one of the butt cheeks, it would be Trump,” said Duke Dunn, 60, a Vietnam War veteran wearing a tank top printed with marijuana leaves and button saying “Weed be Better Off with Bernie.” He says he could “sleep better at night” if he voted for Gary Johnson instead of either candidate.

Other Sanders supporters weren’t dallying with third party candidates, and said they were instead going straight to Trump. “He knows how to create jobs,” said John Smith, a 58-year old air conditioning and refrigeration technician from Philadelphia. “What has she done? Her husband signed that NAFTA agreement.”

Kimmie Knapp, 62, was wearing an orange T-shirt with “#NeverF*ckingHillary” drawn on the back with a black marker. She says she plans to vote for Jill Stein, even if votes like hers could throw the election to Trump. “If we put Trump in, I’ll go down with the ship,” she said. “If Hillary says the sun is shining, grab your umbrella.” She’s carried four signs, including one that said “Can you hear us now?”

Even Bernie Sanders’s endorsement of Hillary Clinton two weeks ago, or his recommitment to stop Trump on NBC’s Meet the Press seemed to do little to cool the furor. Some Sanders supporters seemed to interpret his statements as less than a full endorsement. “He said to us, you follow who you want,” said Ruth Simcox, 66. “It’s a stacked deck,” said her husband Dave.

“I think the election was rigged for her, said Susan Windle, 64, who was marching along several other women in their 60s wearing Bernie Sanders buttons. “If you look at us, we’re Hillary’s demographic, we are older white women, but we’re Bernie people,” said Patricia Blochowiak, 65, walking beside her. They said they would “follow Bernie’s lead” on whether to vote for Hillary, but they’re not convinced he’s made his preference clear yet.

Those voters would have likely chuckled at the party favors handed out at the GOP event just a few miles away. In a tote bag nicknamed “Hillary’s baggage,” the RNC gave away a pair of sunglasses (“because she’s very shady”), a screen-cleaning cloth (“to wipe your server clean”), and a pair of loaded dice. No matter how you rolled them, the side with Hillary Clinton’s logo always came up.

With reporting from Zeke Miller/Philadelphia 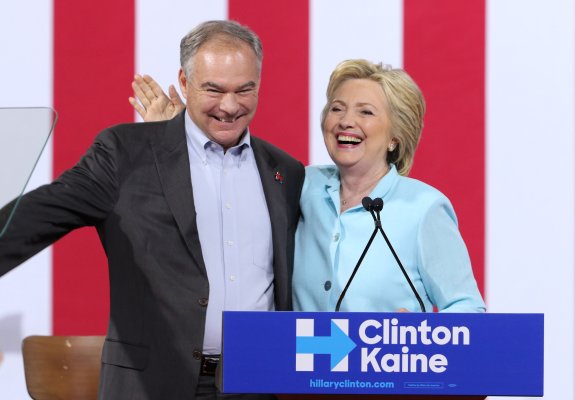 Hillary Clinton and Tim Kaine Say They Won't Use Names to Insult Donald Trump
Next Up: Editor's Pick