An attacker who blew himself up outside a music festival in the southern German city of Ansbach has been identified as a 27-year-old Syrian who had previously been denied asylum.

The man reportedly pledged allegiance to ISIS in a video investigators found on his phone, Reuters reports. Afterward, the ISIS-linked news source Amaq claimed responsibility for the attack and called the Syrian a “soldier of the Islamic State.”

The blast on Sunday night took place outside a bar close to the Ansbach Open event, where an estimated 2,500 people were watching live music in a city square. The area is now under lockdown and the festival has been evacuated, the BBC reports.

In a press conference early Monday, Bavarian Interior Minister Joachim Hermann said the Syrian man detonated an explosive device — and died of his injuries — after being turned away from the festival.

“We don’t know if this man planned on suicide or if he had the intention of killing others,” Hermann said, adding that the Syrian suspect’s asylum request had been turned down a year ago, but he had been allowed to remain in Germany.

In the video found on his phone, the man blamed Germans for getting in the way of Islam, authorities said.

Reuters cites a police spokesman saying that aside from the bomber, who was killed, 12 people were injured in the blast, including three who are in serious condition.

According to German broadcaster Deutsche Welle, the explosion at Eugens Weinstube (Eugene’s Winebar) took place at around 10:00 p.m. local time. It quoted a spokesperson for Bavaria’s interior ministry as saying “We are assuming it was an intentional explosion.” 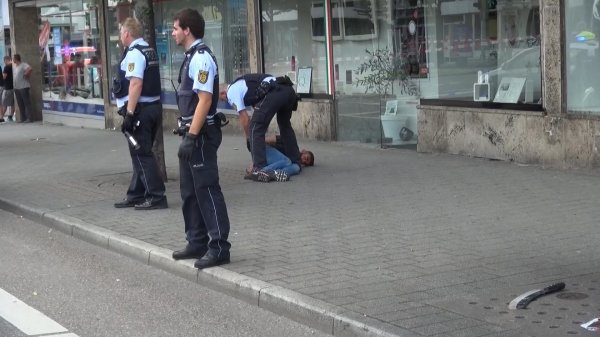 Syrian Man With Machete Kills Woman and Wounds 2 Others in Germany
Next Up: Editor's Pick