You Can Support Hillary Clinton and Still Be Critical of Her

MIAMI, FL - JULY 23: Democratic Presumptive Nominee for President former Secretary of State Hillary Clinton speak at a rally with her Democratic candidate for Vice President, U.S. Senator Tim Kaine (D-VA) (L) at the Florida International University Panther Arena, Florida on July 23, 2016.
Johnny Louis—FilmMagic
Ideas
By Sally Kohn
Sally Kohn is a CNN political commentator, activist, host of the podcast State of Resistance and author of The Opposite of Hate: A Field Guide to Repairing Our Humanity.

In my experience, progressives are inherently inclined to be critical. After all, we’re not the ones who stand for the status quo or, worse, backwards regression, but progress, advancement—the ones who point out what’s broken about the system as it is and how we need to fix it. This is, for the most part, a fantastic quality. It can also make us pains in the ass.

And for the record, I am including myself on this list.

I’ve been thinking about this as I’ve wandered around Philadelphia in the early moments before the 2016 Democratic National Convention. In particular, when Hillary Clinton announced her vice presidential running mate would be Virginia Senator Tim Kaine, my immediate reaction was to be critical. And I wrote about those criticisms, namely of less-than-progressive aspects of his track record.

I stand by my position that Clinton—who still needs to do more to not only woo and excite the progressive base but also genuinely reflect our vision and leadership in her candidacy and the Democratic Party—missed an opportunity with the selection of Kaine. But at the same time, there are plenty of arguments for Kaine as a more progressive than meets the eye, and certainly I took notice when progressive organizations like Planned Parenthood and NARAL gave their seal of approval.

And yet I noticed my instinct to be negative. It was the same instinct I felt when I watched Peter Thiel’s Republican National Convention speech, or Ivanka Trump’s for that matter—looking for the sh*t in the silver lining. I listened to my CNN colleague Van Jones be moved by the historic moment of a Republican convention speaker declaring he’s gay, and I caught myself not feeling that way. Am I that jaded? Or worse?

I don’t know. I feel vexed. Part of me feels like my role is to be critical, to constantly push the mainstream to recognize and reorganize with respect to the margins, to make sure that pretty good is never accepted as good enough. Yes, I agree with probably 90% or more of Clinton’s vision and policies and judgment. I’ve said as much from day one, even when I endorsed Senator Bernie Sanders. I want to do everything I can to support Clinton’s campaign and help her defeat the profound existential threat that Donald Trump and his vision represent. Can I do that and criticize Clinton, too?

Since the Kaine announcement was made, I’ve been watching many of my progressive activist friends and colleagues wrestle with similar questions—which probably feel familiar even to those voters whose hearts were with Bernie in the primary even if their heads told them to be with Hillary.

Part of my frustration is with a general temperament on the left that is uncomfortable with the nuances and trade-offs of wielding real power, of not just slinging arrows from the outside but figuring out how to constructively participate in governing—including being constructively critical where needed.

The problem is, I don’t want to be angry. I’m in Philadelphia, the birthplace of our nation, where, yes, our slave-owning founding fathers enshrined a “compromise” that black people should count as three-fifths of a person for purposes of representation and taxation while blocking women from any political power.

And yet, when I read the United States Constitution, my eyes fill up with tears—not for its insufficient words or imperfect implementation, but for the potential brimming within it. And in that document, and its history before and since, I see a mirror of today. Alexander Hamilton and James Madison and others were participants in our nation’s founding process just as much as they were critics of it, and they enshrined on paper and in spirit not only the potential for change but the need to do so.

Whereas it may be easy to see political criticism as inherently negative, it is perhaps in fact inherently American and, in that sense, enduringly optimistic. Hidden behind every critique is a clear belief that things can and should and must be even better.

I don’t want to be a knee-jerk critic, but I do want to be critical. I don’t want to see the sh*t in the silver lining, but I do want to keep our vision looking skyward toward a better, brighter alternative. I want to spend my time at the DNC this week and the rest of this election reveling in all the wonderful things the Democratic Party today represents—inclusion of immigrants and refugees and people of all faiths, and equal rights for LGBT Americans and women. A party that says Black Lives Matter, that says climate change is real, that says our schools and our cities and our roads and all people deserve support and investment.

Especially faced with a Republican Party and its presidential candidate who seem hell-bent on rolling back whatever progress toward justice our nation has made, I have never been more proud to be a Democrat. That doesn’t mean I can’t be made prouder. 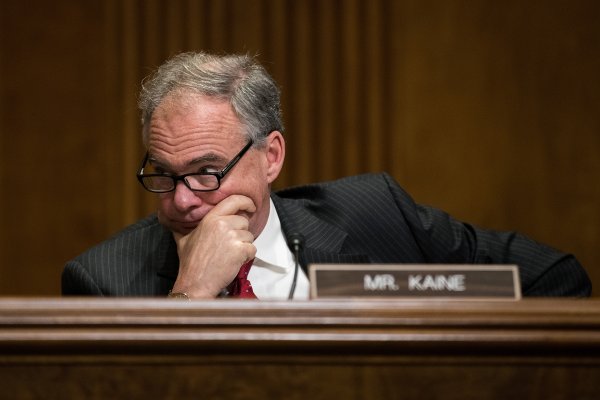 What Tim Kaine, Donald Trump and Pope Francis Have In Common
Next Up: Editor's Pick