The first Wonder Woman trailer premiered exclusively at San Diego Comic-Con on Saturday, and thankfully the movie looks like it will deliver on strong women kicking butt—just as men have done onscreen for decades.

In the trailer, Wonder Woman (Gal Gadot) finds a passed out Steve Trevor (Chris Pine) on the beach. “You’re a man?” asks the warrior who has never seen the opposite sex before.

We see shots of Wonder Woman carrying a sword while wearing a ballgown, fighting on horseback, blocking bullets in the World War I trenches with her shield and wielding her golden lasso of truth. Hammering home the message that Diana Prince is an independent woman, when Steve Trevor tells her, “I can’t let you do this,” she replies: “What I do is not up to you.”

“I wanted to portray this character in a way that everyone could relate too. Not only girls, not only boys, but men and women too,” said Gal Gadot.

“The world needs love and forgiveness in such a huge way. It’s not about who’s right anymore,” director Patty Jenkins said during the panel. “We need heroes who are strong enough to be loving and forgiving…That’s what Wonder Woman in particular stands for.”

The trailer also included a few gag lines, like when Diana Prince asks what a secretary is and, after being told, says, “Where I come from we call that slavery.” 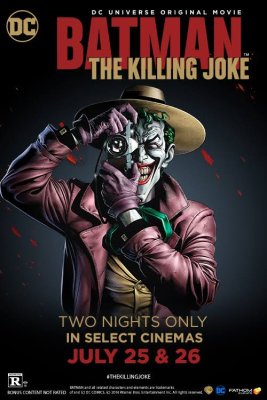 Why People Are Upset About the Batman: The Killing Joke Movie
Next Up: Editor's Pick