Hillary Clinton appeared on Saturday with her running mate, Sen. Tim Kaine, introducing him for the first time as her partner on the Democratic ticket at a blockbuster rally in the crucial swing state of Florida.

Speaking behind a lectern that included the newly minted blue sign with the words “Clinton Kaine,” Clinton called Kaine a “shining example of faith in action” and “everything Donald Trump and [vice presidential nominee] Mike Pence are not.”

“He is qualified to step into this job and lead on Day One,” Clinton told an audience at Florida International University. “He is a progressive who likes to get things done. That’s just my kind of guy.”

Sen. Kaine, a mild-mannered and well-liked senator from Virginia who spent more than fifteen years practicing housing rights law before climbing the political ladder to become governor of his state, spoke afterward of his Catholic faith and his work as a civil rights lawyer.

The overriding theme for both Clinton and Kaine was the same: social do-goodery.

“I’m a Catholic. Hillary is a Methodist,” Kaine said. “Her creed is the same as mine: Do all the good you can.”

The Virginia senator has many of the qualities Clinton was looking for in a running mate: he is policy-focused and agreeable, and the two get along well. He’s widely considered by his colleagues in the Senate more workhorse than showhorse, a senator who keeps his head down and is unlikely to grab the spotlight. He’s a leader, Clinton said “who cares more about making a difference than making headlines.”

Kaine also speaks fluent Spanish, which could be a significant help for Clinton to win Hispanic voters, and he flaunted his Spanish several times during his remarks. “Fe, familia, trabajo!” Kaine told the crowd, when explaining his values, faith, family and work. He spent a year in Honduras volunteering at a technical school alongside Jesuit missionaries.

The groups that backed Clinton’s run, including Planned Parenthood, the Service Employees International Union and others have met Kaine with approval. But some of Vermont Sen. Bernie Sanders’ backers were not happy with the choice.

Kaine supports the Trans-Pacific Partnership and NAFTA, and is not the firebrand progressive some of Clinton’s other potential picks are, like Sen. Elizabeth Warren and Sen. Sherrod Brown. Democracy for America, the grassroots progressive group, said in a statement on Friday night that Kaine’s presence on the ticket would be a disadvantage in beating Donald Trump in the fall.

During his remarks Kaine recounted his upbringing to an ironworker father in Kansas City and the summers he spent working in the shop. He spoke of his wife, Anne, and her father, Virginia Gov. A. Linwood Holton Jr., who integrated Virginia’s public schools, and his children, one of whom is a U.S. marine.

He also emphasized his determination to pass stricter gun control laws, recounting his time as governor during the 2007 Virginia Tech shooting. He also cut into Donald Trump’s business record. “We’ve seen again and again, when Donald Trump says he has your back, you better watch out,” he said.

And as expected, Kaine delivered praise to his running mate and the top of the ticket.

“She delivers in the tough times,” he said of Clinton. “She delivers when she’s on the receiving end of one attack after another. She never backs down. Hillary, whatever the drama, whatever the attack, stays focussed on what matters: helping people.” 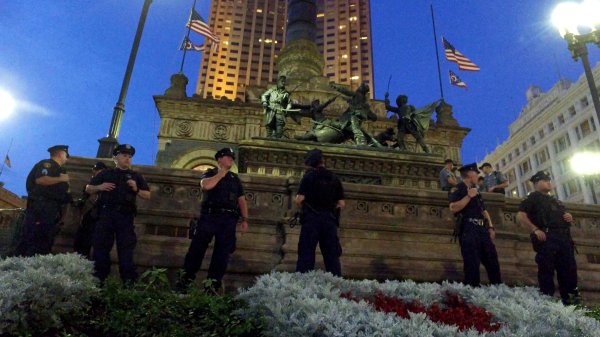 How Police Succeeded at the Republican Convention
Next Up: Editor's Pick