What Tim Kaine, Donald Trump and Pope Francis Have In Common

Tim Kaine listens to testimony during a Senate Foreign Relations Committee hearing on Capitol Hill, on May 26, 2016.
Drew Angerer—Getty Images
Ideas
By Christopher J. Hale
Hale is a Democratic politician from Tennessee; he has been a Catholic nonprofit executive and helped lead faith outreach for President Barack Obama.

Here’s a quiz: What do Donald Trump, Tim Kaine and Pope Francis have in common?

Answer: all three men were educated by Jesuits, a religious order of Catholic priests whose most famous member is the Pope himself.

For Trump, his two years at Fordham University, a Jesuit school in the Bronx, seem to leave little impact on his life. After his sophomore year, Trump transferred to the Ivy league University of Pennsylvania

What compelled him to transfer from his hometown Jesuit university? “I decided that as long as I had to be in college, I might as well test myself against the best,” Trump said.

Tim Kaine is a different story. Kaine, who if elected, would be the second Catholic Vice President in American history (Joe Biden is the first), graduated Rockhurt High School in 1976, a Jesuit school in Kansas City.

“That high school experience with the Jesuits was a key part of my transition into an adult life where instead of just accepting the answers of my parents or others, I’ve been a person who wants to go out and find the answers on my own, and the Jesuits get credit for that,” Kaine says.

After being admitted to Harvard Law School, Kaine took a year off to volunteer with the Jesuits at a vocational school in El Progreso, Honduras. In Honduras Kaine learned to speak Spanish, a skill he will likely use on the campaign trail this fall.

According to Kaine, that year was a watershed time in his life. “I think of El Progreso everyday,” Kaine said. “The people, aside from my family, are the most important in shaping who I am today.”

He also claims his experiences with the Jesuits have inspired his public service: “I do what I do for spiritual reasons. I’m always thinking about the momentary reality, but also how it connects with bigger matters of what’s important in life.”

Kaine grew up in a very devout family. He told C-SPAN earlier this year that “when we got back from a vacation on a Sunday night at 7:30 PM, they would know the one church in Kansas City that had an 8 PM Mass that we can make.”

Kaine still attends Mass with his wife today at a predominantly African American parish in Richmond, where he once was a choir member before his demanding political schedule got in the way.

Kaine has had run-ins with the Church on social issues, most notably on abortion and the death penalty. Kaine supports abortion rights, which is against Catholic teaching.

Asked about this issue earlier this summer, Kaine responded: “I have a traditional Catholic personal position, but I am very strongly supportive that women should make these decisions and government shouldn’t intrude.”

That nuanced view will be difficult to swallow for many abortion rights activists within the Democratic Party and with many of his fellow Catholics who support the right to life from conception.

Kaine does, however, support many of the economic and social justice issues at the heart of the Church’s teaching, most notably support for comprehensive immigration reform.

During Pope Francis’s trip last fall, Kaine said he was moved to tears by the pontiff’s address to Congress. The Virginia Senator recently told me that he considered Pope Francis to be his hero.

After Francis’s address last September, Kaine said that Francis should force us to “ask what our motives are as a nation.”

He said it was the pope’s role to “challenge our thinking” as we face great questions about our nation’s common good.

Let’s hope he takes the same approach if he’s lucky enough to be elected this November. 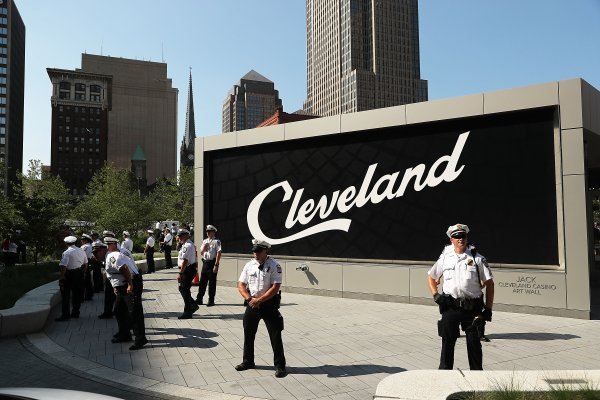 Division and Hatred Need to End
Next Up: Editor's Pick