Britain's Prince George is seen with the family pet dog, Lupo, in this photograph taken in mid-July at his home in Norfolk and released by Kensington Palace to mark his third birthday, in London, July 22, 2016.
Matt Porteous—Handout/Reuters
By Mahita Gajanan

The four photos released by Kensington Palace to honor the third birthday of Prince George warmed hearts worldwide—except for one picture that prompted an animal welfare group to speak out.

Among the four images, one featuring the barefoot royal appearing to feed his pet spaniel Lupo an ice cream treat was seen as more than just a sweet moment between the toddler and dog. After the photos were released Friday, the Royal Society for the Prevention of Cruelty to Animals (RSPCA) said Prince George’s gesture, while well-intentioned, may not have been the wisest course of action.

“It is lovely that Prince George is trying to help keep his family dog, Lupo, cool in these high temperatures,” the RSPCA said in a statement. “We would advise to be cautious when giving their dogs food meant for human consumption as some items, like chocolate, can be highly toxic to dogs and dairy items can be difficult for them to digest.”

Lupo is not actually eating the ice cream in the photo. While dog-safe ice cream and desserts exist, it is unclear whether the kind Prince George is holding qualifies as safe and healthy for dogs. 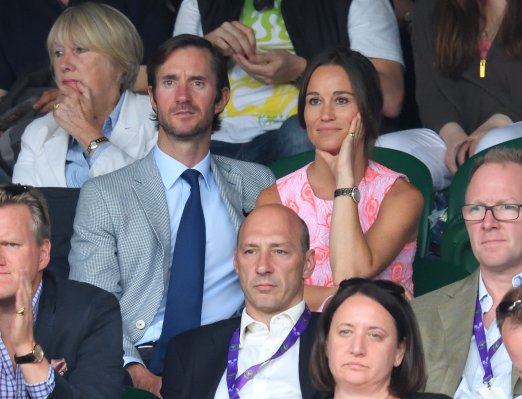 Here's What We Know About Pippa Middleton's Wedding This Weekend
Next Up: Editor's Pick