Ivanka Trump delivers a speech during the evening session on the fourth day of the Republican National Convention at the Quicken Loans Arena in Cleveland on July 21, 2016 .
Alex Wong—Getty Images
Ideas
By Darlena Cunha

The final night of the Republican National Convention left me confused. I was confused for all the normal reasons a liberal would be confused by such proceedings: the night included call outs to the LGBTQ community and addressed issues such as women’s equality, the gender pay gap and childcare policies—traditionally Democratic issues—all to applause.

It seemed as if the RNC was a high-school variety show where none of the acts had anything to do with each other, but the parents in the audience knew they had to clap for their kiddos no matter what came out of their mouths. I was left wondering if the conservatives who back Donald Trump actually believe strongly in any policy platforms at all.

But more than that, I was left with a feeling of warm admiration for Ivanka Trump.

I mean, of course, you can like anyone you wish, but it feels like a betrayal to react positively to the harbinger of the apocalypse.

But Ivanka sounded liberal up there on the stage as she introduced her father. She even said: ““I do not consider myself a Republican or a Democrat.” She spoke with passion and vehemence about the importance of equality in the workforce for women and equal pay. She emphatically pointed out that it was not just womanhood but also motherhood that hurt women in the workplace. She also insisted her father would fix these problems—something I’ve never heard him address other than in fleeting vague remarks when pressed. She did this all to applause.

Was I suddenly transported to the Democratic National Convention?

Yes, she has been given life on a platter, but she hasn’t squandered her privilege; she’s wielded it like a weapon. She’s fast and competent and shrewd. She seems manipulative and ambitious, but somehow lovingly so. She’s made a lot of mistakes but she pushes on.

Ivanka sounded like another prominent woman right now, one reviled and hated by the same crowd cheering Ivanka. On Thursday night she sounded, honestly, like Hillary Clinton.

Like Clinton, but perhaps a better speaker under pressure, as Ivanka can turn phrases to her own end, connecting disparate ideas such as declaring her father a protector of every man, a lover of all people, a giver of chances, all while extolling his cutthroat business acumen. I mean, the man starred in a show where he routinely shouted “you’re fired” at people. But I wanted to believe. The candidate I saw Ivanka promoting still wasn’t someone I’d vote for, but he wasn’t a scary clown bent on world domination.

Thankfully, when her father took the stage, Ivanka’s pretty democratic Hollywood set came crashing down, and we were back to “law and order” and imminent defeat in cowardly weakness as our country apparently hurtled into the darkest place its been since its inception. Ah, there’s the Trump I know.

On Twitter, Emily Nussbaum, TV critic for the New Yorker, called Ivanka the “grossest and most dangerous Trump” for her speech dripping in positivity and half-lies (of which there were many.)

Guardian columnist Jessica Valenti tweeted: “when Trump lies it’s bombastic and obvious. What’s dangerous about Ivanka is that when she lies, you want to believe her.”

But I think it’s deeper than that. I think she believes what she’s saying, too. Ivanka is friends with Chelsea Clinton. She supported Hillary in 2008, and she gave $40,000 to Cory Booker’s campaign in 2013.

She seems to believe in social, liberal values, but she also loves her father and owes him much of her success. For her to go out there and bravely address issues important to her on the biggest night of her father’s political career thus far was brave, important and, dare I say, likable.

I like Ivanka because she comes across like every woman. Her father is Donald Trump, and his world has defined hers. But she’s doing what she can in the area provided her. She’s making due and trying to do more than that. In this way, she’s like every feminist born into this patriarchy. 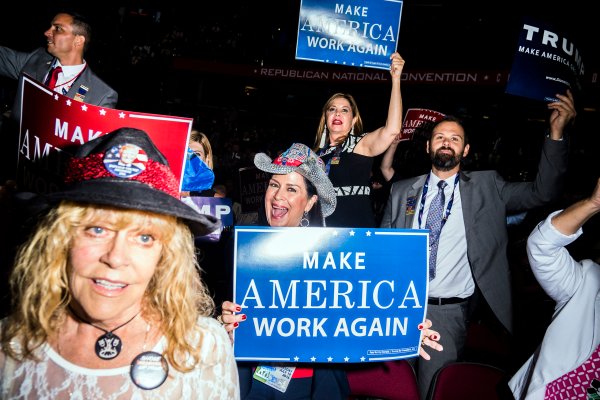 Even If Donald Trump Loses, the Worst Is Yet to Come
Next Up: Editor's Pick