Like many people, economist W. David Bradford says he was under the impression that medical marijuana was something only young people would be interested in. At least, that’s what he thought until his own research began showing otherwise.

In mid-July, he and Ashley C. Bradford, his co-researcher and daughter, published one of the more compelling studies about medical marijuana to date. Their report, which ran in the journal Health Affairs, looked at data on prescriptions filled by Medicare enrollees from 2010 to 2013—and found that older people who qualified for Medicare were, where appropriate, making use of medical pot. Not only that, they also found that when states legalized medical marijuana, prescriptions dropped significantly for painkillers and other drugs for which pot may be an alternative. Doctors in a state where marijuana was legal prescribed an average of 1,826 fewer doses of painkillers per year.

Since 1999, overdose deaths in the U.S. involving opioids (prescription painkillers and heroin) have quadrupled. Meanwhile, estimates suggest opioid abuse racks up over $72 billion in medical costs alone each year in the U.S., and the Bradfords’ report found that states with medical marijuana laws saved $165.2 million per year in medical costs. So while it remains contentious, a growing number of experts some medical experts and even some states are considering the idea that medical marijuana should play a critical—and legal—role in combating the nation’s painkiller epidemic.

“What we hope people take away from this is that when marijuana becomes available as a clinical option, physicians and patients together are reacting as if marijuana is medicine,” says Bradford, the Busbee Chair in Public Policy at the University of Georgia.

Marijuana is a Schedule 1 drug according to the federal government, and many lawmakers and doctors remain resistant to the idea that marijuana has a place in medicine. Some doctors also argue medical marijuana isn’t well regulated. Others say there’s simply not enough scientific evidence to know for certain that people can improve their pain with cannabis, or kick a painkiller habit.

But other experts, like Dr. Donald Abrams, chief of the Hematology-Oncology Division at Zuckerberg San Francisco General Hospital, says anything that makes a dent in an epidemic that kills 80 Americans every day is worth consideration—especially since medical pot is proving in studies to be an effective treatment for pain. “If we could use cannabis, which is less addictive and harmful than opioids, to increase the effectiveness of pain treatment, I think it can make a difference during this epidemic of opioid abuse,” says Abrams who has investigated the effect of cannabis on pain for over a decade. “We are hampered by the fact that it is still difficult to get funding for studies on cannabis as a therapeutic,” he adds.

Still, the movement has momentum. In April, Maine became the first state to consider adding opioid addiction to the list of ailments that medical marijuana can treat. The health department ultimately denied the petition, but proponents like Dr. Dustin Sulak, a licensed osteopathic physician in Maine who treats people with medical marijuana, says it helped start a conversation about pot as a potential solution. “Cannabis enhances the pain relief of opioids and if they are working together, [the effect] is more powerful,” he says.

Sulak practices with Integr8 Health, a health care practice with around 15 providers in Maine and Massachusetts who treat about 20,000 people using medical cannabis. About 70% of the people use medical marijuana for chronic pain, and others use it for conditions like nausea from chemotherapy drugs or cancer. Among over 1,000 people Sulak recently surveyed at Integr8 Health, half said they used cannabis in combination with opioids to treat their pain, and the majority of those people said they either stopped opioids completely or reduced their dosage of opioids over time.

“You don’t see this anywhere else,” says Sulak. “Instead you see people coming back and asking for more and more opioids.”

The idea that marijuana may treat pain and combat addiction is not without precedent. A study published in 2014 in the journal JAMA found that states with medical marijuana laws experienced a nearly 25% drop in deaths from opioid overdoses compared to states that did not have those laws. That may be because medical marijuana, which often relies on compounds from the cannabis plant called cannabinoids, has been found in many studies to help pain management. For example, a 2015 analysis of 79 studies also published in JAMA reported a 30% or greater reduction in pain from cannabinoids compared to a placebo. Studies suggest cannabinoids interact with receptors in pain activity centers located in the brain and spinal chord. There’s also some suggestion that they have anti-inflammatory effects.

In February 2016, Massachusetts senator Elizabeth Warren wrote a letter to the director of the U.S. Centers for Disease Control and Prevention (CDC) asking the agency to look into the “effectiveness of medical marijuana as an alternative to opioids for pain treatment in states where it is legal.”

In 2015, Minnesota added chronic pain as one of the conditions that could be treated with medical cannabis. The Boston Herald reports that some Massachusetts clinics are treating people addicted to painkillers with pot, though the state’s health department does not have an official position on that therapy. So far Maine has come closest to officially adding opioid addiction to the list of conditions pot can treat successfully.

It will likely be quite some time before medical marijuana is a standard and widely accepted alternative to painkillers — but, says Bradford, he’s seen changes over time. “I think we are seeing much more openness to the use of medical marijuana,” he says. Whether state lawmakers agree, remains to be seen. 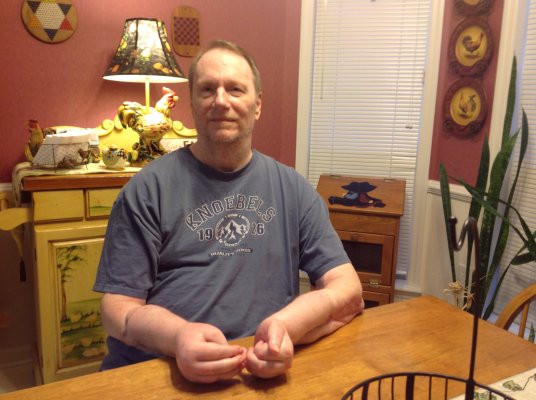 The First American With a Double Hand Transplant Wants Them Removed
Next Up: Editor's Pick