Police in Thailand questioned the wife of British journalist Andrew MacGregor Marshall on Friday, reportedly grilling the Thai national over recent social media posts by her husband that may have breached the country’s strict lèse-majesté laws.

Marshall said in a Facebook post that police raided the Bangkok family home of his wife Noppawan “Ploy” Bunluesilp, 38, which she was visiting with the couple’s 3-year-old son. Ploy and her father were taken in temporarily for questioning Friday morning, he said, adding in a later update that his wife had been released.

Thitirat Nongharnpitak, commander of Central Investigation Bureau, confirmed the detentions to Agence France-Presse, and said a laptop, iPad and documents were also seized. He also linked the questioning directly to unflattering photographs of Thailand’s Crown Prince Maha Vajiralongkorn published this week by German tabloid Bild, which Marshall has shared on social media.

Thitirat insisted the photographs were “doctored,” and said Marshall was responsible. “The culprit is Andrew MacGregor Marshall who has violated lèse-majesté laws for several years,” he said, according to AFP. Formerly based in Bangkok, the journalist has written extensively about the monarchy’s recent history and authored the 2014 book on the subject, A Kingdom in Crisis, which is banned in Thailand.

Marshall insists his wife is not involved in his journalism. “I have always ensured that I work completely independently of her, both because of the risks and because she has her own views on Thai politics and does not share mine,” he wrote on Facebook. “There is no reason for police to detain her.”

Criticizing the monarchy in Thailand is punishable with lengthy jail terms, and prosecutions have ramped up under the military junta that took power in a coup in 2014, against a backdrop of uncertainty over the future of the monarchy. The current King Bhumibol Adulyadej, 88, is in poor health and has rarely been seen in public in recent years. 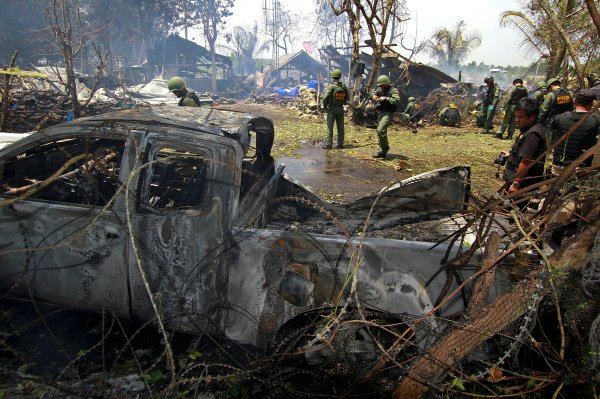 Latest in the Spate of Worldwide Ramadan Attacks: Thailand
Next Up: Editor's Pick