Introducing her father on Thursday night at the Republican National Convention, Ivanka Trump proved herself her father’s most effective surrogate, all but stealing the show in a convention that until that moment was marked by low energy, marred by plagiarism and rife with division.

“When my father says that he will make America great again, he will deliver. We have a chance this year to reclaim our heritage as a country to dream big and making the impossible happen,” she said. “Fortunately, Donald Trump is incapable of thinking small. When I was a little girl, he’d say to me: ‘Ivanka, you’re going to be thinking any way, may as well think big.’”

Ivanka’s speech drew some of the biggest applause of the convention, uniting and exciting a party that has spent much of the week divided. She emphasized her father’s empowerment of women and minorities, areas where he has proved weak in polls. And she shared personal and humanizing anecdotes about a man that has largely gone unknown on a personal level at his own convention.

It is striking that Trump was introduced not by a politician, or a business titan, not a religious leader or his wife, but by the person he is potentially closest to in the world. When asked who his closest advisers are, Trump always puts Ivanka’s name at the top of his list. Ivanka herself told the New York Times that when they are apart they speak on the phone five times or more a day.

In many ways, Ivanka is the yin to Trump’s yang, the id to his ego: she’s cool and calm while he’s hot and bothered. She is relentlessly on message and overprepared while her father wings it and sometimes says unfortunate things. Growing up in the spotlight, she is standoffish toward media attention, while her father seeks it and thrives on it. A 2015 Vogue profile noted that Ivanka has no pictures of herself in her office, even though the former model has graced plenty of magazine covers, while her father’s office upstairs in Trump Tower is filled with smiling pictures of his face beaming from multiple magazine covers.

Emerging on stage to the Beatles’ “Here Comes the Sun,” Ivanka, 34, spoke nostalgically Thursday night of growing up constructing Lego buildings on the floor of her father’s office while he “built the same things with glass and steel.” In a biographical video earlier in the evening, she reminisced: “When I was young he’d send me postcards of buildings and say, ‘I can’t wait for you to grow up and help me build these.’ Now it’s fun to stand shoulder to shoulder with my father.”

While her father grew up in Queens, gazing across the water at the glitz of Manhattan, Ivanka grew up in the bosom of that glitz. She attended some of the nation’s most elite schools: Chapin in New York City; Choate Rosemary Hall, where John F. Kennedy went to high school; Georgetown University; and her father’s Wharton School at the University of Pennsylvania. In addition to being an executive vice president of the Trump Organization and her father’s right-hand woman in his real estate business, she also was his understudy on The Apprentice, has launched her own fine jewelry, shoes and clothing brands as well as an online magazine called Ivanka Trump that, like her 2009 best-selling book, The Trump Card: Playing to Win in Work and Life, speaks to professional millennial women like herself.

As her father told Vogue: “She was a very successful model, and she just gave it up and went to Wharton,” he said. “She said, ‘I love real estate.’ In the end, she chose the family business. Ivanka is a natural dealmaker. She’ll take this company to great levels.”

In 2009, she married Jared Kushner, the son of another billionaire real estate tycoon. Kushner, a Democrat, has become one of Trump’s closest political advisers. Ivanka — who has given money to Hillary Clinton and Mitt Romney and held a fundraiser for New Jersey Senator Cory Booker, who is on Clinton’s VP shortlist — told the Republican crowd that she has always supported the candidate she felt best represented her.

“I do not consider myself a Republican or a Democrat,” she said. “Not this time. Donald Trump is the person to make America great again.”

Ivanka wasn’t always so supportive of her father’s candidacy. Early on, she told CNN: “As a citizen, I love what he’s doing. As a daughter, it’s obviously more complicated. She has often been the person he’s turned to when in distress, like when he and Fox’s Megyn Kelly were at odds. But she and her siblings have grown to become some of their father’s most effective surrogates. Ivanka and brother Donald Jr. at a Skybox on Tuesday night wooed Sheldon Adelson, the billionaire Republican megadonor, whose money could make or break the general election as Trump plays catch-up to Clinton on the fundraising front.

And she has suffered a fair amount of sibling jealousy. Her older brother Donald Jr. once described her as “Daddy’s little girl,” according to the New York Times. And earlier Thursday, her little brother Eric Trump told CNN’s Sara Murray: “She does the princess thing very well and she’s obviously very close with my father.” Both her brothers spoke on earlier convention nights, and neither shared the same kind of personal anecdotes that Ivanka did.

Ivanka, who has said in the past that she supports equal pay, used her speech to make a powerful case for women’s equality — an unusually feminist argument for a Republican convention. In lines that could have been spoken by Hillary Clinton, she pledged to make it her mission to help women in America.

“As President, my father will change the labor laws put in place when women were not a significant portion of the workforce. He will make childcare affordable and accessible to all,” she said. “He will fight for equal pay for equal work and I will fight for this too right alongside of him.”

“In Donald Trump, you have a candidate that knows the difference between wanting something to happen and making it happen,” she reiterated. With a smile to the audience, she added: “Judge his values by those he has instilled in his children.” 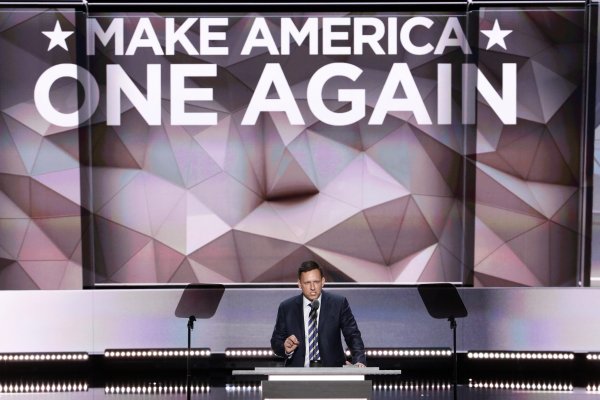 Read Peter Thiel's Speech at the Republican Convention
Next Up: Editor's Pick