Before the convention began, I had noted that the convention would have a minimizing effect on Donald Trump’s skyscraper-sized persona—that, forced to operate within the bounds of a four-day event with straightforward and familiar traditions, the most garrulous nominee in recent history would be effectively, for lack of a better word, tamed.

I had not felt particularly confident in this prediction watching three days’ worth of chaos, including a wild night Wednesday that included a former presidential candidate getting booed off the stage. Watching the broadcast of Thursday night’s culmination of the Republican national convention, though, it seemed apparent that, at least for a night, Trump was willing and able to be brought into the framework of what we expect from a candidate—which may give his political opponents some cause for concern.

After all, Trump’s very unconventionality in the mass media has allowed for arguments that he’s a flash-in-the-pan. He attended debates just to sneer at his opponents or skipped debates just to put a stick in Fox News’ eye had the valence of a reality-TV candidate willing to make chaos for its own sake.

Whether or not one agreed with what Trump said on Thursday night, it was put forward—after an unpredictable week—as the ultimate in predictability, airing in the peak prime-time hour after a “Man From Hope”-style video dictating Trump’s self-styled history as a self-made man and after a testimonial from daughter Ivanka, whose reserve on the campaign trail suddenly came to an end as she delivered a startlingly full-throated endorsement of her father. Speaking on his behalf, Ivanka made a case for herself as a future star—if not in politics, necessarily, than in whatever venue is ready for her willingness to outshine the competition and big enough to fit her bold sense of self.

After her introduction, Trump was suddenly back in the position in which he has far more successful TV experience—as the adjudicator in a position of power, not the aspirant trying to break things. Towards the end of his speech, his mention of those who believed he wouldn’t get far in the primaries felt less disapproving of the past than incantatory towards the future.

Sure, Trump raised his voice a fair amount more than a conventional candidate might. But within the context of the evening, his stridency was open to a reading of “a passionate nominee wanting to improve things.” And Trump was also unusually able to slow things down, as in his paean to students across the nation or his unconventional mention (doubly) of the LBGTQ community—with his opponents removed, Trump was able to work his way towards an (inconcrete) argument in favor of something, rather than just existing in the sort of entertaining opposition that has made his short political career thus far. That even his affirmative suggestions seemed to strike a dark chord felt like something towards which the listener had been preconditioned by a grinding campaign.

His speech was vastly longer than another nominee’s might have been—running deeply past 11 p.m. Eastern, the hour at which East Coast prime-time broadcasting technically ends—but it also included red-meat snippets for every constituency. And, after all, it ended with the traditional balloon drop with the families of Trump and Vice-Presidential nominee Mike Pence. Even a long speech can generate a photo op meant to warm the heart, or push the candidate away from the fringe.

The telecast made this, across the nation, an evening to rattle Trump’s detractors and bolster his supporters. Trump’s claims about his electoral opponent may have used language orders of magnitude stronger than has been used at a convention before, but he was, for once, the broadcast’s uncontested star.

Trump’s star wattage has, in the past, worked against him when it comes to arguments about what is—his behavior towards opponents and towards interrogating journalists is seen as pushy, disrespectful, or bullying. Placed on his own in front of a field of flags, Trump, who got through his speech with no substantial embarrassment and who smoothly got around the removal of an in-room protester by the police, got to invent a whole new definition of “presidential.”

After all, why couldn’t he be? Many other candidates weren’t considered presidential, until they were. 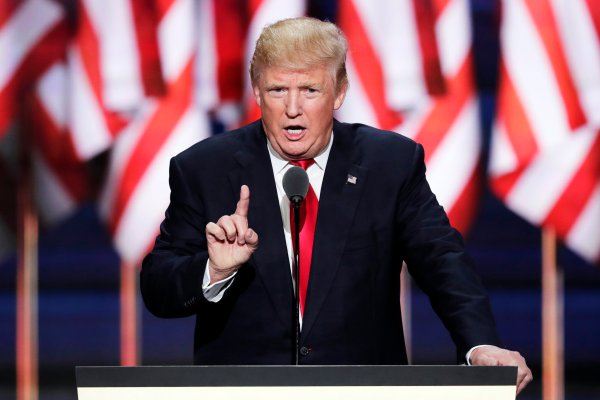 Read Trump's Acceptance Speech at the Republican Convention
Next Up: Editor's Pick