Young Republicans Want the GOP to Back Off Social Issues

Teenage delegates shouted to be heard over “The Thong Song.” Polaroid photos and discarded snap bracelets littered the floor, and the partygoers scribbled notes with milky pens before heading to a take a selfie with a sign declaring them the “New Conservatives on the Block.”

This was the “Make America Dance Again,” ’90s dance party, hosted by the College Republican National Committee, and about 200 young conservatives were there to party like it was 1999.

“Back in the ’90s, they made deals and stuff like that, and they got things done,” says Austin Evans, a 21-year old guest of a delegate, of what he now thinks of as a gentler time. “We kinda got along with each other.”

But weren’t Clintons in power during this golden age of pogs, Pokemon and political harmony?

“Bill Clinton seemed like a fun guy,” said Tim Slocombe, 20. His friend Michael Talaganis, 19, says the ’90s were a time when “everything [was] available to you.”

If a ’90s nostalgia party seems out of place at a GOP convention largely devoted to vilifying Hillary Clinton, that could be because the youngest Republicans are out of step with a quickly aging GOP. According to Nick Allman, founder of the Republican National Convention Youth Caucus, fewer than 2% of the delegates at the RNC are under 30.

“The current model won’t last very long demographically,” notes Slocombe, who voted for John Kasich in the primary and hasn’t quite come around on Donald Trump. “Old Christian white people are dying out.”

And when they do, the party will change dramatically. Many young Republicans want the GOP to modulate its hard-line stances on social issues like gay marriage and drug legalization in order to attract younger, more diverse voters.

“Those issues are far less important than some of the other things we’re dealing with, and by clinging to them, you drive away potential Republicans,” says Allman, a 23-year old student at Trinity University and delegate from San Antonio. “You gotta give it up or you’re gonna lose.”

In interviews with nearly 20 young RNC delegates, alternate delegates, and guests, there was a near unanimous consensus that the party establishment needed to back off LGBT issues like traditional marriage and transgender bathroom access in order to attract more young voters. “A lot of people think that we just straight up can’t deal with any LGBTQ community members,” says David Morton, an 18-year old alternate delegate from Massachusetts. “The new generation of young Republicans, that’s not how we think.”

Peter Thiel, the openly gay Silicon Valley entrepreneur who is slated to speak during primetime Thursday night, could be a read as an olive branch towards this younger, more tolerant wing of the party, as could a speech by Eric Trump Foundation vice president Lynne Trump, who used the more progressive phrase “LGBTQ.”

Many also said they wanted the party to go in a more libertarian direction, which they said included relaxing on other social issues, like abortion and marijuana legalization.

“I’m more in favor of less government forcing people to decide whether to get an abortion or not,” says Eric Shure, a 32-year old delegate from Florida. “We need to take a step back and look at medical marijuana in the way it can be used,” says Tanner Goldsmith, an 18-year old alternate delegate from Georgia.

The vast majority of the young Republicans interviewed at the RNC said Trump had not been their first choice. Most voted for Marco Rubio, Ted Cruz or John Kasich, and some hadn’t even decided if they’d vote for the nominee. Many said they thought the candidate’s rhetoric was alienating young voters, even if they weren’t convinced Trump actually believes what he says.

“If Trump did not have the harmful rhetoric about either Muslims or immigrants, I could 100% vote for him,” says Jorge Villarreal, a Mexican-American 19-year old at-large delegate to Texas. “But because of the things he said about those coming here illegally, like my parents who were granted amnesty under Reagan, I just can’t in good conscience vote for a President like that.”

Other young Republicans also said they wished Trump would cool it a little. Michael Talaganis, a 19-year old Republican, said he thought Trump’s promises were “way too radical for us to enact.” “Trying to build a wall, trying to have Muslim immigrants have special ID cards, that’s completely unconstitutional,” he said .

Write to Charlotte Alter at charlotte.alter@time.com and Julia Lull at julia.lull@time.com. 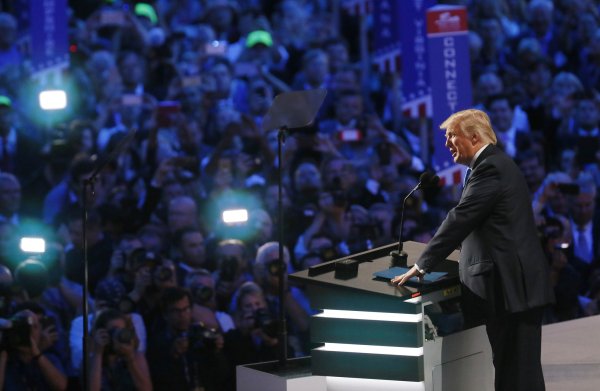 Why Donald Trump's speech at the convention was historic
Next Up: Editor's Pick