Donald Trump is far more interested in winning over crowds than adhering to any kind of Republican foreign policy orthodoxy. These five facts detail the divergence between a traditional Republican approach to the world and the views of a candidate selling a foreign policy as iconoclastic as the man himself.

Once upon a time—all of six months ago—America’s business friendly party was the GOP, and being pro-business meant being pro-trade. Trump has a different view: “Our politicians have aggressively pursued a policy of globalization —moving our jobs, our wealth and our factories to Mexico and overseas. This wave of globalization has wiped out our middle class.” Trump has railed against NAFTA (which supports 14 million jobs, 5 million of which exist only because of NAFTA, according to the U.S. Chamber of Commerce), and vowed to tear up the proposed Trans Pacific Partnership trade deal, expected to net $77 billion in new income annually and support 650,000 jobs for American workers overall. For the record, his new running mate Mike Pence is a strong supporter of TPP, too. Or at least he was until this week.

Back in 2009, 59 percent of Republicans said trade agreements have been good for the country. By 2015, that number had fallen to 53 percent, before nosediving to 39 percent this year. Trump probably can’t win without the combined 38 electoral votes in Ohio and Pennsylvania, states in which existing trade deals are especially unpopular, and Michigan’s 16 electoral votes are a top target, as well. On trade, Trump sees a growing divide between party elites and voters who have lost manufacturing jobs. He’ll side with those voters.

Trump has held the party line on the “disastrous” Iran nuclear deal. On Israel, however, Trump’s early attempt to position himself as a neutral arbitrator between Israelis and Palestinians backfired spectacularly. To make amends, Trump was forced to deliver a carefully scripted speech to the country’s largest pro-Israel lobby that hit all the traditional notes. Trump has also repeatedly claimed that he opposed the Iraq War from the start, an argument that is both demonstrably false and one that in any case puts him at odds with the 62 percent of Republicans who still believe that going to war in Iraq was the right thing to do.

It was the spiritual father of the modern Republican Party, Ronald Reagan, who famously proposed reducing the world’s nuclear arsenal at a crucial Cold War moment. The world’s supply of nuclear weapons has since been reduced by two-thirds to some 15,000. About 93 percent of these belong to the United States and Russia, and the other 7 percent are divided among 6 countries (excluding North Korea).

If Trump has his way, the nuclear club would grow, and quickly. The newly-minted Republican nominee has argued that the U.S. pays more than its fair share for global security, which is certainly a defensible position. But his proposal to solve that problem—leaving countries like Japan and South Korea (and Saudi Arabia!) to defend themselves with nuclear arsenals of their own—has baffled Democrats and many Republicans. For decades, U.S. presidents have worked to prevent the proliferation of nuclear weapons to minimize the risk they fall into the wrong hands. For Trump, they are ordinary bargaining chips in the fight to manage defense costs.

But the divergence with fellow Republicans runs deeper than that. Presidents of both parties have traditionally promoted relations with allies to help extend U.S. influence abroad. Trump speaks of allies as free-loaders, taking advantage of foolish American generosity. “We have spent trillions of dollars over time—on planes, missiles, ships, equipment—building up our military to provide a strong defense for Europe and Asia. The countries we are defending must pay for the cost of this defense—and, if not, the U.S. must be prepared to let these countries defend themselves.”

The U.S. has indeed spent trillions of dollars on defense over the decades, and allies have benefited without always fulfilling their agreed obligations. For example, of NATO’s 28 member states, only five—the U.S., Greece, Poland, Estonia and the U.K.—meet NATO’s recommended guideline of spending 2 percent of GDP on defense. The U.S. actually spends more than 3.5 percent of its GDP on defense. But Republicans—and a strong majority of the American people, 77 percent of whom say NATO is good for the U.S.—accept extra burdens as part of the price of leadership. Trump made clear again during the GOP convention that he will abandon NATO partners who have not “fulfilled their obligations to us,” something he expanded on in a New York Times interview where he cast doubt on whether he would come to the aid of NATO allies like Estonia in the event of a Russian invasion.

But arguably the most surprising development this election cycle has been Trump’s open admiration for Russian President Vladimir Putin, who has responded in kind. Past Republican leaders have treated Putin’s authoritarian rule and military aggression with contempt. Former Republican nominee John McCain has called Putin “an old KGB apparatchik who wants to restore the Russian Empire.” The most recent GOP nominee, Mitt Romney, called Putin’s Russia “our number one geopolitical foe.” But Trump seems to like Putin’s tough-guy style.

Trump has an entirely different view of the authoritarian power that many Republicans and Democrats would like to do business with. China is America’s top importer and 3rd largest export destination; Russia is the U.S.’s 24th largest importer and doesn’t rank in the top 30 exporters. But Trump treats China first and foremost as an economic predator and pledges to impose a 45 percent across-the-board tax on Chinese imports into the U.S. That’s a good way to start a trade war that harms China, the U.S., and the entire global economy.

Bottom line? Trump’s less interested in the Republican Party brand—and any damage he might do to it—because the GOP is simply his available vehicle to the White House. Traditional Republican foreign policy will survive a likely Trump loss in November. Its ability to survive a Trump victory is much less clear. 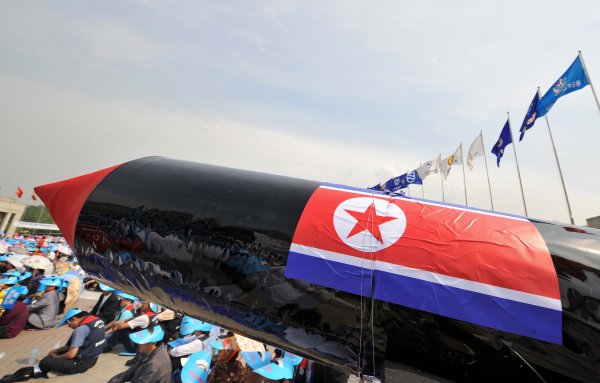