Police investigate the scene near an SUV in which a man suspected of causing a bomb scare barricaded himself, causing an hours-long standoff and the shutdown of a mid-Manhattan area in New York City on July 21, 2016.
Brendan McDermid—Reuters
By Melissa Chan

A New York City man who allegedly threw a hoax bomb into a marked police van with two officers inside was taken into custody Thursday following an hours-long standoff with police, authorities said.

Hector Meneses, 52, of Queens, is suspected of tossing a cylindrical object through the open window of a police van in Times Square late Wednesday, which prompted quick-thinking officers to speed away from the crowded Manhattan tourist destination, according to the NYPD.

“I look around, saw a lot of kids, a lot of young people,” Sgt. Hameed Armani, who was driving the van, told reporters at a news conference. “We both look at each other and I was like, ‘We’re going to go, but I’m not going to have anyone else go with us.'”

Both Armani and his partner Officer Peter Cybulski said their prayers during the 30-second to a minute-long car ride out of Times Square, Armani said. “We thought, this is it. We’re not going to make it, but I’m happy no one else is going to get hurt,” he said.

NYPD Commissioner William Bratton hailed Armani and Cybulski as “heroes” of the city for immediately deciding to move the possible threat to a less-crowded area. They later confirmed the make-shift device was a candle and a harmless electrical component, police said.

“We knew what each other was thinking,” Cybulski said. “We weren’t going to let anything happen in Times Square.”

Meneses was taken into custody shortly before 8 a.m. Thursday, authorities said. Police say he had fled in his vehicle after tossing the object into the police van. 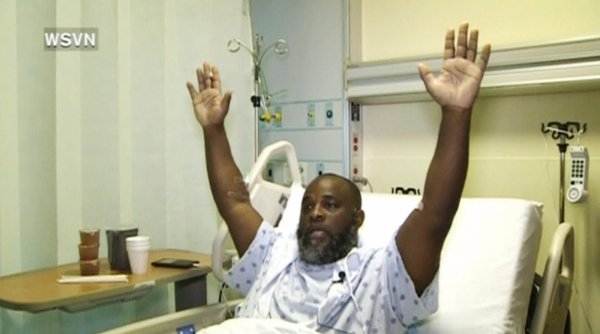 Therapist Shot by Police Thought 'I Got My Hands Up, They're Not Going To Shoot Me'
Next Up: Editor's Pick