Peak Pizza Is Here: American Appetite for Pizza Cools Off

Pizza may have peaked. Pizza consumption in the U.S. has increased year after year, but forecasts indicate that we may not be able to stomach much more.

Americans eat an astonishing amount of pizza. That’s hardly a news flash. It’s become customary to periodically hear about just how much pizza we eat—seemingly more and more each year. A 2012 report from the food and beverage research firm Technomic, for instance, reported that 40% of Americans ate pizza at least once a week, up from 26% with a weekly pizza habit two years prior. In February, the U.S. Department of Agriculture released a study filled with fascinating pizza-eating factoids, like that on a typical day, 13% of Americans had some varietal of pizza, either served by the lunch lady at school, prepared by a restaurant, or pulled out of the freezer and baked at home. It’s no surprise what demographic tends to eat pizza most often: Roughly one-quarter of boys ages 6 to 19 are enjoying a slice (or three or five) on any given day.

What may come as a surprise, however, is that pizza’s popularity, long on the rise in the U.S., appears to finally be leveling off. “Although consumption is high,” a recent Technomic post noted, “it seems to have decreased just slightly over the past two years, likely peaking post-recession due to pizza’s ability to satisfy cravings and meet needs for value.”

Over the last decade or so, pizza has undeniably been on a hot streak. But success may not have come strictly because pizza is so delicious—and hey, there’s no denying that it is—but also because pizza has been seen as an affordable dining option during the Great Recession and the years that followed. Perhaps inevitably, pizza’s popularity seems to have plateaued, regardless of how the economy is faring.

“Overall, the pizza category has not been doing well,” Bonnie Riggs, a restaurant analyst for the NPD Group, explained to the Chicago Tribune. Riggs pointed to a range of NPD data to bolster her argument, including that foot traffic at major fast-food pizza chains like Pizza Hut decreased 2% last year. Smaller regional pizza chains have actually suffered from declining customer traffic for seven consecutive years, including a 6% dip in 2013.

Many fast-casual pizza restaurant brands have entered the marketplace lately, and quick-service giants not known for pizza, such as Subway, have started serving pizza products too. It’s all made for an increasingly competitive space: Mall food court staple Sbarro, which filed for bankruptcy in early March, appears to be one of the first victims.

Down the road, it looks like all of the pizza sellers will be aggressively fighting for a piece of a pie that’ll more or less stay the same size, as American pizza consumption is expected to remain fairly flat. The Tribune story points to projections made by Euromonitor International, which forecasts that pizza sales in the U.S. will rise by just 1.9% this year and 2.1% in 2015. 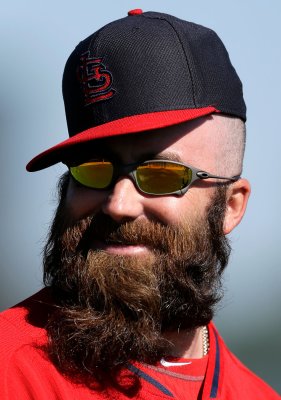 The 12 Best Beards In Baseball This Season
Next Up: Editor's Pick