Russia’s track and field athletes ‘Olympic doping ban will send a serious message to cheaters, according to Usain Bolt.

The Jamaican sprinter said officials needed to “make a statement” because “doping violations are getting so bad,” the Guardian reported.

Bolt spoke on Thursday after the Court of Arbitration for Sport upheld the ban enacted by athletics’ governing body, known as IAAF.

“This will scare a lot of people and send a strong message that the sport is serious about cleaning up,” Bolt said. “For me if you have the proof and you catch somebody I definitely feel you should take action. If they feel like banning the whole team is the right action then I am all for it. Rules are rules and doping violations in track and field is getting really bad, so thumbs up.”

Bolt declined to comment further on whether the whole Russian team should be banned from the games in Rio de Janeiro — a decision the International Olympic Committee said it will make within the next week.

Bolt will seek to defend his 100 m, 200 m and 4×100 m relay titles next month, and will run a 200 meter race in the Anniversary Games on Friday, which will be his first race since pulling out of the Jamaican trials with a hamstring injury. While speaking on Thursday, he pointed to a bandage on his arm and said audiences could trust him.

“I’m tested all the time, years upon years,” he said. “I got tested this morning. The IAAF test me all the time, the World Anti-Doping Agency test me, everybody tests me. I have all the trust in my doctor and I support him 100%.” 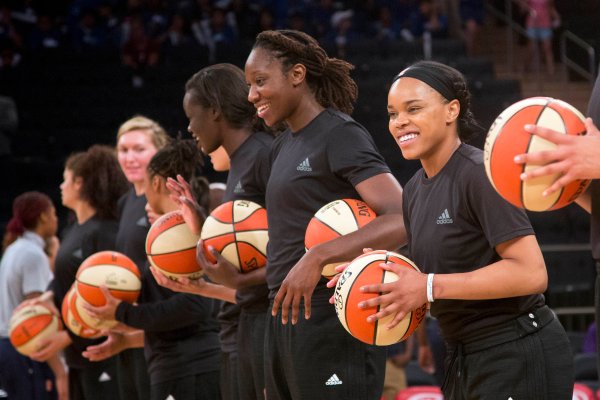 WNBA Fines Players for Wearing Black Shirts in Wake of Police Shootings
Next Up: Editor's Pick