Not again. That was the lament of many across France after Mohamed Lahouaiej Bouhlel fatally mowed down 84 revelers in a 19-ton truck on Nice’s seafront Promenade des Anglais on July 14–Bastille Day. This third major terrorist attack within just 18 months felt both unbelievable and inevitable. Now, France wonders, who can possibly put the country back on track?

Certainly not their leaders. Even as the boardwalk in Nice filled up with familiar flowers, candles and stuffed toys for the 10 children killed, fury lay just below the grief. When Prime Minister Manuel Valls arrived on the packed waterfront with top officials on July 18 to mark a minute’s silence, chants of “Resign!” and “Murderer!” rang out from the crowd. It was hard to find a starker contrast to the massive solidarity march in Paris in January 2015 after the Charlie Hebdo murders or the weeks of public grieving and Je suis Paris signs after the November attacks that killed 130 people. This time, amid signs on the Promenade des Anglais reading Je suis Nice, many read Je suis épuisé (I am exhausted).

The French are now training their frustrations on politicians who seem powerless to dismantle the deadly threats. In a poll after the July 14 massacre, 88% of French people said their government had failed to protect them against jihadists. Just one-third thought it was even capable of doing so. “The first attack, O.K.,” said Rudy Salles, deputy mayor of Nice for the center-right UDI party, standing on the promenade the night after the attack. “The second attack, O.K. The third attack–we want action.”

French officials want action too–if they can only stop arguing long enough to decide what that should be. The historically unpopular President François Hollande extended the eight-month state of emergency within hours of the Nice attack, reversing a decision made just hours before to halt it. Attempting to cast himself as a wartime leader, he mobilized military reservists and vowed to step up air strikes against ISIS positions. Yet three days later, Prime Minister Valls admitted that nothing the government was doing would likely keep the French people any safer. “This is difficult to say, but more lives will be lost,” he told the Journal du Dimanche. “Terrorism will be part of our daily lives for a long time.”

That may be honest, but it is scarce comfort for a scared country. The Nice attack appears to have finally exposed a government fresh out of ideas as it faces a near impossible task: stopping attackers whose jihadist links are believed to be tenuous at best. French officials believe Bouhlel was radicalized only weeks before the attack. It seems to be a pattern of an emerging generation of attackers; an Afghan teenage refugee who attacked train passengers in Germany with an ax on July 18 was also a brand-new convert to jihadism. Both attacks were hastily claimed by ISIS. But Bouhlel, at least, was hardly devout; his acquaintances describe the French-Tunisian as a violent, unstable drinker. “He was not a Muslim,” Walid Hamou, a friend of Behloul’s former wife, told TIME in Nice. “He didn’t do Ramadan. He did not pray.”

Who can stop invisible loners like these from waging terror? Hollande’s rivals–looking ahead to the presidential elections scheduled for April and May of next year–were quick to volunteer themselves. “Everything that should have been done over the past 18 months was not done,” former President Nicolas Sarkozy, who is likely to run in 2017, told France’s TF1 television on July 17. He revived the controversial idea of stripping terrorist suspects who are dual citizens or foreign residents of their French nationality. “Someone who shoots at French people, someone who kills, someone who wants to do jihad, does not have a place in France,” Sarkozy said. “It will be them or us.”

The far-right National Front leader Marine Le Pen has pounced too. A photo of the giant memorial gathering on the Promenade des Anglais appeared on July 18 on the party website. Above read the slogan, Against immigration, only one solution: The National Front.

There will be more such proposals from Hollande’s opponents as next year’s elections draw closer, but experts doubt that the politics will make the country any safer. “After every attack there is a race for the one who can make the most definitive proposals about terrorism,” says Jean-Charles Brisard, chairman of the Center for the Analysis of Terrorism in Paris. “It is dangerous for our country and our citizens, because politicians are playing a short-term game. And the threat is here to stay for a long time.” The only question for the battered and fearful French is what comes first–another empty political gesture or another attack. 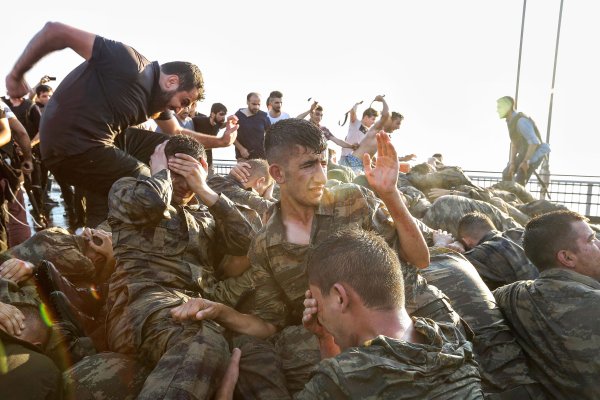 Turkey's Long Night of the Soul
Next Up: Editor's Pick