An Unhinged Republican Convention and the Nation's Greatest Test

Attendees hold signs at the Republican National Convention in Cleveland on Tuesday, July 19, 2016.
Benjamin Lowy for TIME
By Joe Klein

The Republican Convention opened with a distraught mother, tears in her eyes, saying something palpably outrageous: “I blame Hillary Clinton. I blame Hillary Clinton personally for the death of my son–personally.” The woman was Patricia Smith, the mother of the American hero Sean Smith, who was killed during the attack on the temporary U.S. consulate (and CIA station) in Benghazi. Grief can do terrible things to the mind and soul. I can’t imagine why Smith has fixed on Clinton, who was an extremely peripheral figure in the failure to secure the Benghazi station: matters of consular security never reach her level of seniority–and, more to the point, the significant operation in Benghazi was run by the CIA, which should have been responsible for the security. David Petraeus was director of Central Intelligence at that point, and no one blames him for the ambush, nor should they. But Clinton has Republicans frothing, despite a raft of investigations that showed no culpability on her part. And yet the Republican Party, to its everlasting shame, decided to exploit a slander promulgated by a distraught mother as one of the opening salvos in its convention.

This is nothing new. It has been going on since Clinton first appeared on the scene, caricatured as the personification of 1960s radical feminism, a pretentious First Lady who thought she was empowered to reform America’s health care system. Her very existence drove a certain brand of Republican crazy–and 25 years later, the way we view Clinton, even those who try to view her rationally, has been tainted by the unprecedented onslaught.

You can’t blame Donald Trump for this. In fact, the Caesar of solipsism tramped on the Patricia Smith spectacle by calling in to the risible Bill O’Reilly–who was busy trying to gin up a race war by blaming Black Lives Matter for the police shootings–while Smith was speaking. Indeed, back in the days when Trump was inviting the Clintons to his wedding, Republican sympathizers were spreading similar trash, like the rumor that “the Clintons” had murdered Vince Foster, a close friend who committed suicide. There were other unspeakable rumors, a steady flow, a crushing burden over the years, that have had an undeniable impact on Clinton–creating a wariness bordering on paranoia, resulting in a stilted public slipperiness on matters like her email server.

The fervor of this assault has always amazed me. It poisoned the grassroots of the Republican Party, made possible the disgraceful birther campaign against Barack Obama, made possible Trump’s candidacy. It has transformed Republicans into the party of hate, rather than of conservatism. It has caused politicians like Rudy Giuliani, an excellent former mayor of New York City, to seem deranged in public, as he did on the first night of the Republican Convention when, eyes bulging, he said Clinton’s “dereliction of duty and failure to keep her people safe played a major role in the horrific Islamic terrorist murders … in Benghazi … including her lying directly to the families of those who were killed.” This is arrant nonsense: Clinton may have told some of the families–others say she didn’t–that the Benghazi attack was part of the massive riots across the region that night in response to an anti-Islamic video. At the very least, the video obscured a planned attack on the CIA annex.

I’m not sure I know how to write about this election anymore without seeming imprudent. I came into this year believing that our government was desperately in need of conservative reform and restraint. I came to those views watching the corroded incompetence of the Department of Veterans Affairs and also in the belief that Democrats had been too unwilling to look at and think clearly about the failures of the welfare state. I had some problems with Hillary Clinton too–from her support for the invasion of Libya to her foolish personal behavior, accepting big-money speeches from Goldman Sachs because, she said, she “wasn’t sure” she was going to run for President. But I would never question her essential decency; indeed, she is one of the most thoughtful politicians I know. And the Democratic Party, for all its politically correct smugness and silliness, has never surrendered its soul to the extremists lurking on its left. The Republican Party, by contrast, has become a national embarrassment. Donald Trump is a national embarrassment. This election will be the greatest test, in my lifetime, of the wisdom of our people and the strength of the democratic project. 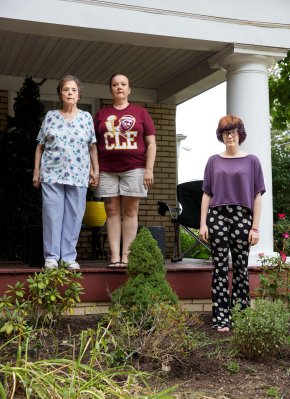 Women Support Hillary Clinton by Large Margins. But They're No Monolith
Next Up: Editor's Pick