How Mike Pence Tried to Heal the Republican Rift

After Texas Sen. Ted Cruz pointedly failed to endorse Donald Trump in his primetime speech at the Republican convention, it was left to the two other keynote speakers to repair the damage.

The first to try was former House Speaker Newt Gingrich, who gamely deviated from his script in an attempt to recast Cruz’s words in a more favorable light.

“So to paraphrase Ted Cruz, if you want to protect the Constitution of United States, the only possible candidate this fall is the Trump-Pence Republican ticket,” he added.

It was not an entirely convincing moment, but Gingrich didn’t make it to the final round of Trump’s vice presidential selection for lack of effort. Still, in the end, it came down to the winner of that particular competition to try to salvage the evening.

Indiana Gov. Mike Pence, delivering his first speech as Trump’s running mate, set out to do what he was picked to do: help heal the party.

Pence’s speech was, by design it seems, reassuringly dull. Trump “is a man known for a colorful personality, a lot of charisma,” he joked. “I guess he was just looking for some balance on the ticket.” Pence is about as conservative as they come, having endorsed Cruz in the Indiana primary only to see his state vote overwhelming for Trump. “I’m a Christian, a conservative, and a Republican, in that order,” he said.

He was patently aware of that he doesn’t enter the race with much name recognition. “For most of you who don’t know me, which is most of you,” he deadpanned, “I grew up on the frontline of the American dream.” He spoke of his hardworking immigrant Irish parents and his idyllic Indiana childhood.

Pence’s speech was as close as Trump’s convention has come to conventionally Republican. He hit all the marks: opposition to Hillary Clinton, the importance of picking conservative justices and strong support for law and order both at home and abroad. He avoided areas where he has differed with Trump such as trade, and even managed to tamp down controversial calls of “Lock her up!” from the audience.

And he was effusive in his praise for the man who “has brought millions of new voters into the Republican Party,” he said. “As we say back home, you can’t fake good kids, how about his amazing children, aren’t they something?”

Quicken Loans Arena, full for the first time since the convention began, chanted: “I like Mike!” Trump came out and the two embraced before Pence’s family joined him on stage, the evening ending on a happier note.

As with Melania Trump’s speech Monday, Pence’s competent performance was overshadowed on cable news by the drama of the night. But for those who watched, it was a speech that was reassuring in all the ways it was not like the rest of the convention that surrounded it.

Pence may not have healed the Republican rift Wednesday night, but for a while there, he successfully papered it over. 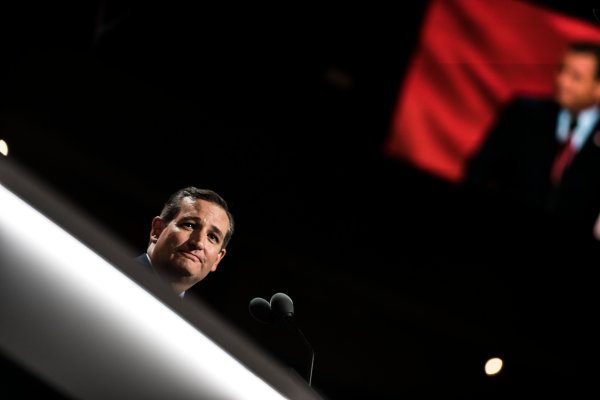