The U.S. Is Seizing $1 Billion in Assets in Malaysia's 1MDB Corruption Case

The 1MDB logo is seen on a billboard in Kuala Lumpur on July 3, 2015
Manan Vatsyayana—AFP/Getty Images
By Nash Jenkins

U.S. federal prosecutors have filed a civil lawsuit in order to seize more than $1 billion in assets they believe were obtained with funds siphoned off a controversial Malaysian state development fund. The move, announced by U.S. Attorney General Loretta Lynch on Wednesday, is one of the largest asset seizures in U.S. history, the Wall Street Journal reports, and the “largest single action” under the Department of Justice’s new antikleptocracy initiative.

For more than a year, the fund in question, 1 Malaysia Development Berhad (1MDB), has been the subject of international scrutiny after the media reported that massive sums of cash had allegedly been transferred from the fund into the private bank accounts of Malaysian Prime Minister Najib Razak. The scandal has precipitated demands in Malaysia for Najib’s resignation and a series of global investigations in the matter.

According to the FBI, powerful officials at 1MDB siphoned more than $3.5 billion from the fund and laundered it though a series of international transactions. It was then used to bankroll decadent purchases, ranging from luxury apartments to fine art. Prosecutors claim, as several media outlets have reported in the past, that the 2013 blockbuster film The Wolf of Wall Street, which was co-produced by Najib’s stepson Riza Aziz, was bankrolled by the stolen 1MDB funds. (Riza Aziz is directly named in the lawsuit.)

“The $1 billion in assets that we are discussing today are just a portion of the more than $3 billion that were stolen from 1MDB and laundered through American financial institutions in violation of United States law,” Lynch said, going on to note that “unfortunately, sadly, tragically, a number of corrupt 1MBD officials treated this public trust as a personal bank account.”

Since the scandal surrounding 1MDB erupted last summer, Prime Minister Najib has repeatedly denied wrongdoing, and was exonerated by Malaysia’s Attorney General in January. The U.S. lawsuit does not directly name him in the case; however, there are several references to an unnamed “Malaysian Official 1,” which the Wall Street Journal reports is a moniker for Najib.

Najib’s office says it will “fully cooperate” with the proceedings, the BBC reports.

“Today’s action sends a message to corrupt foreign officials,” special agent Darryl Wegner, who heads the FBI’s International Corruption Unit, said in a statement. “The FBI, together with our international partners, will find these individuals and root out their corruption.” 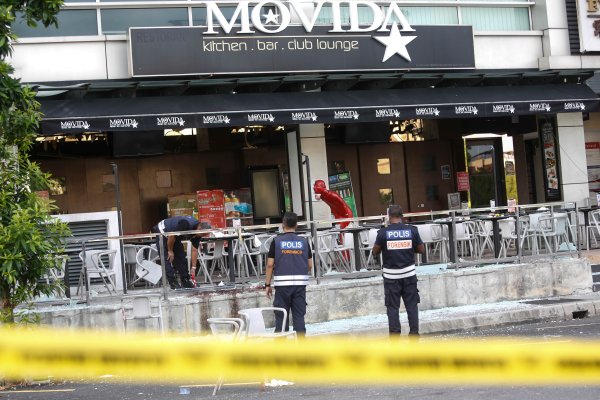 Details of Malaysia Blast Suspects Emerge
Next Up: Editor's Pick