When Was America Last Great? Here's What Republican Delegates Said

The implicit premise of Donald Trump’s slogan “Make America Great Again” is that the country was great at some point in the past but is no longer.

That raises the question: When was America last great?

Delegates on the floor of the Republican national convention in Cleveland who talked to TIME had different ideas. The clear winner was the Reagan-era, with the post-World War II period coming in close second.

Read More: What Year Was America Great? You Tell Us

However, a few who waxed nostalgic about the 1950s changed their pick to the 1980s after they were asked a follow-up question about the era’s racial segregation.

Here’s what the delegates had to say:

North Carolina State Sen. Ron Rabin, 84: He said the the post-war era had a unified people and an unbeatable country. When asked about segregation, he responded: “You can’t do anything about history. That’s the way it was and revisionist history makes no sense.”

Former Michigan Rep. Pete Hoekstra, 63: “My parents immigrated in the 1950’s and I’m sure that they were liberated by American troops after five years of Nazi occupation and they went to a country who gave them another chance.”

Frank Circelli, 66: Georgia gemologist: “The 1950’s when we were out of debt and had a good president when Ike was in office.”

Tom, 74, a Wisconsin delegate and retired Army security officer who refused to give his last name: 1950s because of Elvis.

Claire French, 77, a retired New Jersey county clerk: “It was a time of opportunity, not of giveaways. I’d like to see that for our children today: give them opportunities, not things.”

John Vasko, 81, a retired Washington state physician: “Those Eisenhower years, after World War II, when the country was growing, it was law abiding; the people were together. They were kind and everybody didn’t have a big burr under their saddle.”

Mike Stopa, 61: Massachusetts physicist: “This girlfriend I had was pretty foxy.”

Sherry Powell, 54, Washoe County (Nevada) GOP treasurer: “It was an era of innovation of Apple and Steve Jobs.”

Tom Hardesley, 66, a semi-retired insurance agent from Berkeley County: “Because of Ronald Reagan. The country was prosperous and people had good paying jobs and lower taxes.”

Cherie Billings, 67, a Nassau County chair and Florida delegate: “I grew up in California and in my first election I voted for Ronald Reagan.”

Jay Narang, 44, a Florida businessman and president of the southwest Broward Republicans: “Reagan brought the country back together and he was kind. He worked with Tip O’Neill and made Americans feel good about themselves.”

Chuck Yob, 79, a Michigan delegate: “Ronald Reagan: That was the greatest time.”

Sylvia Andersen, 67, a former Utah State legislator: “In the Reagan era we had hope and freedom and a president who believed in our country, who was proud of our country.”

Phil Bryant, 61, governor of Mississippi: “Under Reagan, you saw America become strong again. The economy exploded and our enemies feared us.”

Alabama Supreme Court Justice Tom Parker, 64: “It was under Ronald Reagan when we saw the fall of the wall in Germany and the eastern European countries break away from the grip of communism.”

Sarah Huckabee, 34, daughter of former Arkansas governor Mike Huckabee and a Trump advisor: “Right after September 11, 2001. That was the time in my lifetime that we were the most united that I can remember. The world cried with us and cheered with us and respected us in a way I don’t think a lot of the world does now.”

Hardy Billington, 63: Missouri delegate, retired heating and cooling company: “Bush 43 was a great president. I wrote a book about him in 2004, Elected by Faith and he had me to the White House to sign it.”

Sam Wakim, 51, owner of dental practices and an Indiana delegate: “For 30 years my businesses grew but in 2007, the financial crisis happened and they still haven’t fully recovered yet. So, I’m nostalgic for 2007, the last time my businesses were on a strong path to growth.”

Michael Baisden, 66, a West Virginia coal miner and substitute teacher: “2008. As soon as Barack Obama was elected billions of dollars went outside of the country because they knew Obama would redistribute the wealth and that’s what he’s done.”

Correction: An earlier version of this story misspelled a delegate’s name. It is Ron Rabin. 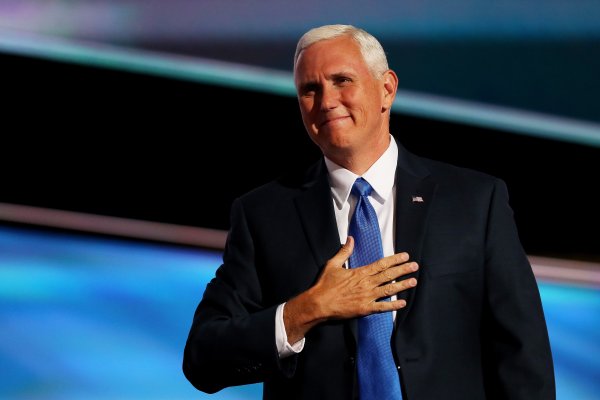 Watch Mike Pence Speak at the Republican Convention
Next Up: Editor's Pick