The United Nations is selecting a new Secretary General this fall. TIME foreign affairs columnist Ian Bremmer spoke with Christiana Figueres, the former head of the UN Framework Convention on Climate Change, about how she would change the UN:

What is the single most important thing that a UN Secretary General can do to make the United Nations a more effective institution?

Deepen the trust among Member States, and between Member States and the UN as an institution. The UN is tasked with many responsibilities, including engaging in active preventive diplomacy, running outstanding field operations, creating the context for ambitious multilateral achievements, and delivering on programs across the many focus areas that have been mandated by governments. None of these can be delivered without trust. In the lead up to the Paris Agreement, we used to say that our three priorities were trust, trust and trust. This is because as deeper trust was established and carefully built, new types of conversations became possible and the elusive common ground began to emerge and grow. My vision is of a United Nations that Member States and citizens everywhere fully trust to help the international community avoid war, to excel at seeding and keeping peace where it is needed, and to foster breakthrough agreements and partnerships that improve people’s lives today and give them greater hope for the future.

Last year, the UN supported Member States to reach three breakthrough multilateral agreements that, taken together, lead us towards a more secure and prosperous future for all. These have become known as “Agenda 2030”. As a consequence of its own success, the UN as an institution now needs to reorganize around the inspiring goals that these agreements established, and ensure that it has the resources and capacity to ensure they are delivered. Many suggestions have been made about the specific reforms that might be needed – for example, the appointment of a Deputy Secretary General who is exclusively focused on Sustainable Development, or the establishment of a Sustainable Development Board to oversee the UN’s 27 development programs, funds and specialized agencies; ensuring that they all pull in the same direction. An early task for the next Secretary General will be to consider the merits of these suggestions and come to a view about what’s needed. But what’s clear is that, with the negotiating phase now behind us, the UN must step confidently forward into this new era, pull together much more closely and gear up for the on-the-ground delivery of Agenda 2030.

You’ve written of the need for greater UN investment in “early-warning” of potential conflicts. What are the most important tell-tale signs of impending violence, and how can the UN use these to prevent conflict?

There are many factors that are linked to the likelihood of conflict: demographic shifts, exposure to fluctuating global commodity prices, economic performance and levels of inequality, a State’s human rights record, security of access to vital resources, and communities’ vulnerability to natural shocks like drought – to name but a few. The ongoing build up of adverse factors – to use the analogy of fire – is like the build up of large stocks of biomass. While lightning will not necessarily strike this year or next, still the build up of that biomass creates an ever-present risk; just one spark can, at any moment, tip the whole situation into conflict. Early warning systems are there to monitor the overall build up of that biomass; it does not help us to track some tell-tale signs, but not others. Rather, the UN system, working very closely with regional organisations, must continually scan and analyze the full range of data available; always on the look-out for the build up of risk.

There are several ways in which the UN can use this information to prevent conflict. In the short term, the UN can engage in preventative diplomacy; supporting States to alleviate and de-escalate key risk factors, where it notes that these are building up. For example, where particular communities are facing increasing water insecurity, the UN might support the host country and its neighbors to reach a trans-boundary water sharing agreements that ensures people’s immediate needs are met. In the longer term, there is much that the UN can do to prevent conflict too – for example, accompanying countries in their implementation of the 2030 Agenda to ensure that societies everywhere are more prosperous, resource secure and resilient to shocks.

What is the most important obstacle to the effectiveness of the Security Council, and what you do to overcome this obstacle?

The Security Council is at its most effective when its 15 Members share a common perspective on an emerging situation and can rapidly agree on what they see as the necessary course of action. But as we all know, it is rarely that simple. Given the complexity of many of the threats to peace and security that we see playing out today, and the different worldviews that come together on the Council – is it any wonder that a consensus position often takes time to emerge? This is not to excuse inaction – we are all shamed by the suffering we see in our world today and must do more to ensure people everywhere are safe and that their human rights are being honored. It is easy to say that there is no simple, quick solution to improving the effectiveness of the Security Council – but there are things that the Secretary-General can do. I would work tirelessly to ensure that many issues never need come before the Security Council – raising emerging threats early and lending my good offices to resolve a dispute before it becomes a conflict. Should this fail, I would not hesitate to bring to the attention of the Security Council any matter which in my opinion may threaten the maintenance of international peace and security. While the Security Council deliberated on the matter and what must be done, I would act as a trusted, impartial go-between for the various members, listening to their perspectives and giving 100% to building bridges between them in service of a swift and effective response.

I believe the UN needs to act as a locus for agreement and as a catalyst for action; creating a favourable context for agreement among Member States, and mobilising a wide range of actors to deliver those agreements. While the UN system can and must align itself to help them deliver, it should not bear the full weight of delivery alone. The private sector, investors, civil society and many other stakeholders are very able to play their part; often having better access to capital flows and delivery infrastructure, including supply chains, than the UN. This approach is what I refer to as the new “collaborative diplomacy”; inviting the contribution of others and blending the best of governmental and non-government – recognizing that more can be achieved through the collaboration of all.

What specifically would you do as Secretary-General to help women and girls around the world to achieve their human potential?

Women’s rights would be a key focus of my work as SG, and I would make this an overarching issue for all UN bodies to give special attention to. There have been some areas of improvement in women’s rights globally in recent years, but overall progress has been limited, and significant inequalities and injustices based on gender persist globally. This is both unforgivable and a loss for all of us (not just women), as we all miss out when over 50% of the human population is not supported to achieve its full potential. Evidence shows, for example, that improving gender equality in all sectors can contribute to greater global peace and prosperity. There are many things that I would seek to do on this issue as SG. Firstly, I would strengthen the foundations upon which women’s potential can flourish by promoting wider and stronger adherence to the UN Declaration on Human Rights and by implementing the 2030 Agenda – many aspects of which are relevant to women in particular. And secondly, I would make a concerted push on particular issues, including: providing greater aid to displaced women across the world (the vast majority of refugees and displaced people are women) – and putting additional safeguards in place to prevent them from being abused, and involving women in political negotiations and peacekeeping efforts. 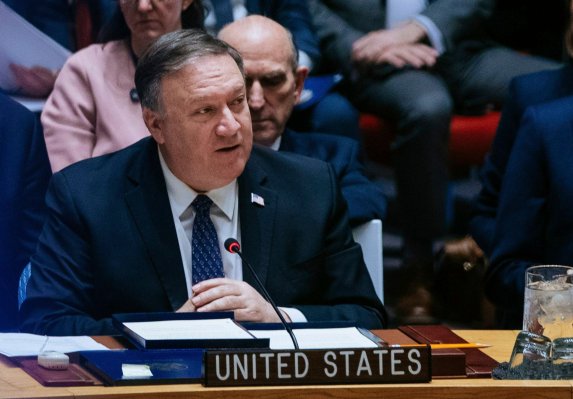 Secretary of State Pompeo Urges the U.N. to Recognize Juan Guaido as Venezuela's Rightful Leader
Next Up: Editor's Pick