At least one person in Cleveland is have a fantastic week and that’s conservative firebrand Ann Coulter.

“The Never Trump crowd had a way to stop Donald Trump,” she told a long line of adoring fans waiting for her to sign books in front of Barnes & Noble in the University Circle area in East Cleveland. “They had 30 years to take his positions on immigration and trade.”

Coulter was there to sign copies of her most recent book, her eleventh, Adios America: The Left’s Plan to Turn Our Country Into a Third World Hellhole. The conservative pundit came into prominence writing legal briefs for Paula Jones’ attorneys in the 1990s, which became fodder for her first book, High Crimes and Misdemeanors: The Case Against Bill Clinton.

The firebrand has since made a career of going after the left. But in recent years, her book sales had faltered, until Donald Trump came along.

Trump adopted, and cited as his source, much of Coulter’s latest book on immigration and trade, bringing her legions of new followers. John Alberty was originally a Ted Cruz supporter, but he started to follow Donald Trump after Cruz dropped out. The 79-year-old from Bricksville, Ohio, learned of Coulter from Trump and has become a fan. He and his grandson, Tony Apolozer, a 20-year-old radioactive therapy student at Cuyahoga Community College, were waiting on line to meet Coulter and have her sign their book.

They waited a while as Coulter was running more than an hour later and they’d got there early to be at the front of a line of about 80 people.

Behind them in line was 14-year-old Donovan Barnes, who sported a Trump T-shirt advertising his adoration of the GOP nominee. Barnes, who also learned of Coulter from Trump, was heckling some pro-choice women who were protesting across the street. They held a hand-painted banner that read: “Ann—We’d call you a c— but you lack the depth and warmth.”

“That’s why you don’t have boyfriends,” Barnes yelled. “Go get an education, and gender studies isn’t one!” The crowd cheered him on.

Coulter’s opening act, Milo Yiannopoulos, arrived about 40 minutes late. He calls himself the “Dangerous Faggot,” the name of his self-titled traveling show. Yiannopoulos was “having the best media day of his life,” as his publicist kept saying into his constantly ringing cell phone, because he’d just been banned by Twitter. An outspoken critic of Muslim immigration in America and Europe, Yiannopoulos was banned for “abusive behavior” towards African-American actress Leslie Jones, who recently starred in the Ghostbusters reboot.

“I am going to make Twitter’s life a living hell,” Yiannopoulos yelled on a hastily set-up loudspeaker so everyone could hear, to cries of “God protect you,” from the crowd. “Twitter is nakedly using its platform to political ends.”

Coulter soon showed up, more than an hour late. She spoke for three minutes before disappearing into the bookstore. “Everyone, listen up,” an aide told the crowd. “You have to have purchased copies of ‘Adios America,’ or any of Ann’s books to get in for the signing. And take out your phones. You have to be able to prove to us that you’ve pre-ordered Ann’s next book, In Trump We Trust, E Pluribus Awesome, out this August, to take a picture with her.”

The first 30 people in line immediately whipped out their phones. Indeed, especially for her, “It’s great to be at a convention where the nominee is Donald Trump,” she said with a wave to her fans. 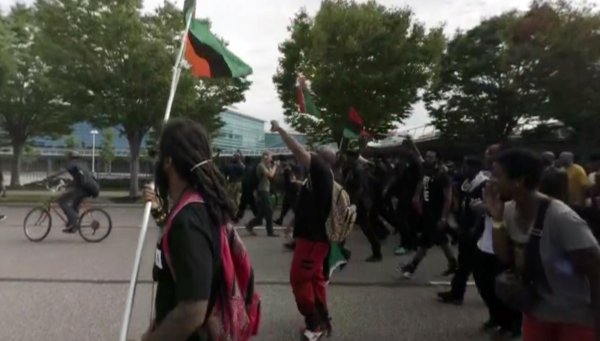 Go Inside a Convention Protest With This 360-Degree Video
Next Up: Editor's Pick