A crowd of a few thousand people—a handful of protesters and counter-protesters, but mostly police officers and passers-by—gathered at about 4 p.m. on the corner of East Fourth and Euclid after reports surfaced that communists planned to burn a flag on that spot.

The intersection is just outside the security perimeter surrounding the Quicken Arena, where Donald Trump was formally nominated Tuesday night.

Read More: This Is Why It’s Legal to Burn the American Flag

A flag was briefly burned Wednesday evening and several people were arrested after scuffling with police officers, who appeared to outnumber the protesters by a ratio of at least three to one. Police sprayed something—either pepper spray or possibly just a fire-suppressant—at one point, a protester told TIME.

Most members of the assembled crowd—an incongruous mixture of religious people, anarchists, communists, bikers, Trump supporters and reporters—said they’d come to either witness the protest, or counter-protest themselves.

Earlier that day, the Revolutionary Communist Party had posted on social media that their members planned to burn a flag to “express their discontent with the system,” said Carl Dix, who identified himself as member of the RCP.

“It’s not just what they’re doing to black people, it’s immigrants, it’s women,” he told TIME. Dix said he came to Cleveland from Baton Rouge, where he had been protesting the police shooting of Alton Sterling, a black man.

Matthew James, 30, a well-wisher from Chicago, said he heard about the protest and came “as a supporter.” He planned to film the protest to ensure that “everyone’s First Amendment rights are respected,” and to help raise bail money for anyone who’d be arrested.

When news of the Revolutionary Community Party’s flag-burning plans became public knowledge on Twitter, and on police scanners, James said, all kinds of other groups, including anarchists and Bikers for Trump, came to the scene.

Jim Williams, a biker with a long white beard and a leather jacket emblazoned with witticisms like “I’ll keep my God and Guns, you keep your Change,” said he came to protest the protesters. He’s a member of Riders U.S.A., but joined Bikers for Trump for the day.

“I don’t think what they ‘re doing is right, I don’t think the attempt to override the system in general is good,” he told TIME. “They came out here to try to disrupt and intimidate people—it’s not right.”

As Williams was talking, a man carrying an eight-foot stick decorated with messages about Jesus Christ began chanting loudly about the sins of humanity, drowning him out. At one point, a single, tinny voice shouted “Hillary! Hillary! Hillary!” but when the chant failed to catch on, the voice disappeared.

Meanwhile, at least 50 police officers, a few of whom were on horseback, worked to keep the crowd calm.

At just after 4 o’clock, a man pulled an American flag out of a backpack and briefly lit it on fire, but he was quickly arrested by police. After the brief scuffle, a small group of pro-Trump supporters began chanting “U.S.A.,” and one man with a megaphone attempted to give the crowd a history lesson.

“These people say the Republican Party is the KKK. The KKK started with the Democrats!” he said. Evidently in reaction to Revolutionary Communist Party signs that said, “America Was Never Great,” he continued: “If America’s not great, how come people from all over the world want to come here?”

Meanwhile, dozens of police officers formed a circle around the protesters to keep the protesters and counter-protesters from coalescing. Passers-by, squished against one another, exchanged sympathetic looks. By a quarter after 5 o’clock, the intersection was quiet. 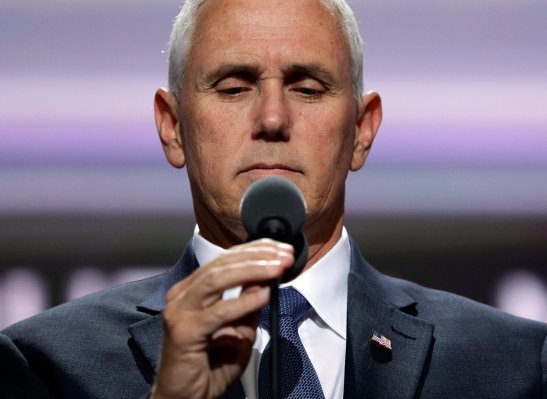