A writer for the Trump Organization on Wednesday took the blame for the plagiarized speech Melania Trump delivered at the Republican National Convention and offered to resign over the error.

In a statement, McIver said she jotted down some passages from Obama’s speech after Melania Trump read them out loud on the telephone as examples for inspiration. She said she ended up including those passages in her final draft without checking the First Lady’s speeches. “This was my mistake, and I feel terrible for the chaos I have caused Melania and the Trumps, as well as to Mrs. Obama,” McIver said. “No harm was meant.”

Here’s what we know about Meredith McIver:

She has written books with Donald Trump
McIver co-authored several books with the reality TV star and real estate mogul, including the national best-seller Trump: How to Get Rich, which purports to reveal the secrets of his success learned from The Apprentice. She also helped Trump write his 2010 book Think Like a Champion, in which he shares his strategies and future goals.

She is a former dancer
McIver is a former ballet dancer and English major, the New York Times reports. She began training at George Balanchine’s School of American Ballet in New York City when she was a teenager, according to her Speakerpedia biography. McIver attended the School of American Ballet in the summers of 1965 and 1966, the dance school confirmed Wednesday. She then enrolled as a full-time student in their advanced division from 1966 to 1970. Before that, she worked on Wall Street, the biography says.

She is a California native
McIver is from San Jose, California. She graduated with honors from the University of Utah in 1976, according to Annalisa Purser, a spokeswoman for the school. McIver has since worked as an editor and writer.

She was forgiven for the plagiarism
McIver said she offered to resign after the plagiarized speech sparked a firestorm in the media and embarrassed the campaign. However, she said the Trumps rejected her resignation. McIver said Donald Trump told her that “people make innocent mistakes and that we learn and grow from these experiences.”

She did not immediately return a call for comment.

With reporting by Melissa August 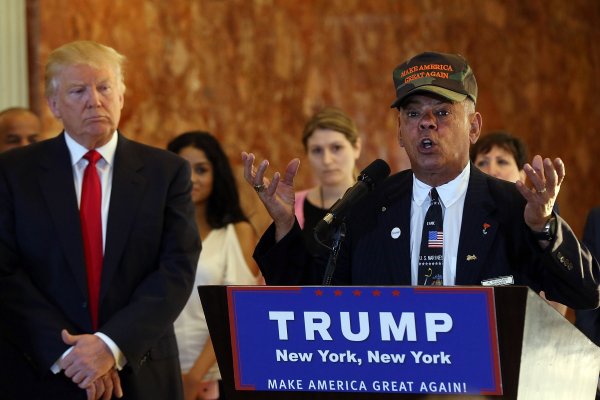 Donald Trump's Veterans Advisor Says Hillary Clinton Should Be 'Shot For Treason'
Next Up: Editor's Pick