Just days after the Republican Party released a platform criticized as its most socially conservative ever, transgender celebrity Caitlyn Jenner explained to an audience of Republicans why she considers herself a member of the GOP.

“I feel like our best hope to get back to constitutional government with 18 enumerated powers is in the Republican Party,” Jenner told an audience at a brunch just blocks away from the Republican National Convention arena in downtown Cleveland. “And I have to admit I’ve been very disappointed over the last five or ten years and so I won’t give up hope on it.”

Jenner, who spoke on Wednesday morning at a brunch organized by the conservative, pro-LGBT American Unity Fund, came out as transgender last year, sparking a national conversation. The former Olympic athlete also raised eyebrows when she insisted in subsequent interviews that she is also a Republican. “It was easy to come out as trans. It was harder to come out as a Republican,” Jenner joked on Wednesday.

LGBT Republicans like Jenner have found themselves in a difficult position, caught explaining themselves to their political party as well as their Democratic friends.

This week, the GOP approved a platform that defines marriage as the “union of one man and one woman.” The party drafted language aimed at restricting bathroom usage to individuals’ birth sex and an early version nodded to “conversion therapy,” or the discounted practice of trying to “cure” homosexuality. The published version condemned “the hate campaigns” by “proponents of same-sex marriage” and left many gay and transgender Republicans wondering what there place is in the party and whether they are welcome.

“I get it. The Democratic Party does a better job when it comes to the LGBT and trans community and all of that,” Jenner said at Wednesday’s brunch. “The Republican Party needs to understand. They need to know people who are trans.”

Some LGBT Republicans have dismissed the Republican platform as an anomaly drafted by the Party’s more conservative elements. The drafters of the Party’s platform, they say, do not represent the evolving party.

“The platform committee remains comprised largely of individuals who have shaped it for decades and who have a very particular view on politics, largely through their identity as evangelical Christians,” said Gregory T. Angelo, the president of the Log Cabin Republicans who attended the event.

Even while some criticized the platform, Wednesday’s lineup at the Republican convention in Cleveland will include a rare openly gay primetime speaker, Peter Thiel, and the party’s platform committee included its first openly gay member, Rachel Hoff. In attendance at the brunch to see Jenner were several Republican members of Congress, including Rep. Darrel Issa of California and Rep. Ken Buck of Colorado.

There has been some friction between the Republican Party’s base and its outspoken nominee for president, Donald Trump, who has had a more liberal view on social issues. He said earlier this year that transgender people should use whatever bathroom they feel most comfortable in and in 2000 expressed support for a ban on discrimination against gays.

In the aftermath of the Orlando attacks, Trump cast himself as a champion for gay Americans. “Who is really the friend of women and the LGBT community?” he said. “Donald Trump with actions? Or Hillary Clinton with her words.” Gay rights groups, however, have mostly rejected Trump’s overtures. “He is no friend,” said Chad Griffin, president of the gay rights group the Human Rights Campaign.

Democrats, meanwhile, drafted the most pro-LGBT rights platforms in history, with strong language defending transgender Americans and the right to same-sex marriage. The platform will be officially adopted next week at the Democratic convention in Philadelphia.

Hillary Clinton has sought to present herself as a champion of LGBT rights, walking in the New York City Pride Parade last month and supporting laws that would make illegal to discriminate against people based on sexual orientation..

LGBT Republicans expressed dismay at the platform and the recent spate of legislation introduced in states intended to restrict access to bathrooms based on an individual’s physical sex at birth. “I think this is the nadir of where the party’s been, where really the socially conservatism has been the engine,” said Jennifer Williams, a transgender woman and honorary Republican delegate from New Jersey. “It’s not a fringe but I don’t think it’s as big as it looks on TV.”

Cynthia Coffman, the Republican attorney general for Colorado who spoke at the brunch said she was “ashamed” by the party’s direction. “As a Republican I confess my deep disappointment in a party platform that looks backward rather than looking forward,” she said.

American Unity Fund, a conservative super PAC founded by conservative hedge fund billionaire Paul Singer, ran a digital advertisement in North Carolina targeted at the state’s controversial HB 2 law, which passed earlier this year and requires individuals to only use restrooms that correspond to the sex on their birth certificates.

Republicans at the American Unity Fund brunch said they believed that younger party members would change the party’s values.

Nate, a 16-year-old from Dawsonville, Georgia wore a bright red “Make America Great Again” hat to the American Unity Fund brunch. “If you’re going to talk about Ronald Reagan and all these guys you also have to believe what they believed in,” he said. “I think it’s time we put our differences aside and agree that everyone’s created equal.”

Speaking at the brunch, Jenner, too, said she was “hopeful” about the party’s future. “I would tell the Republicans, I would tell Donald, there are people out there who have been marginalized for so many years,” Jenner said. “We need to deal with it properly. We need to be open about it. It is about the kids its about the next generation growing up.” 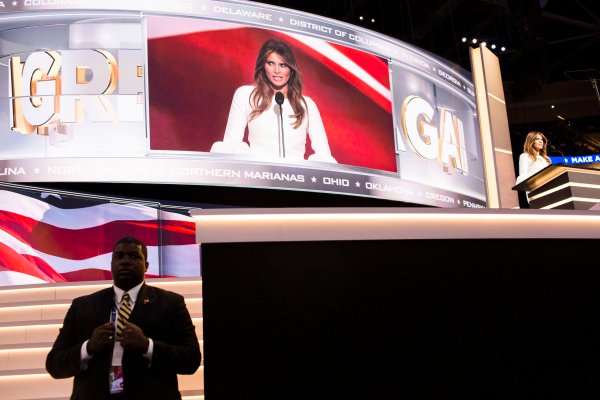