Melania Trump speaks during the Republican National Convention in Cleveland, Ohio, on July 18, 2016.
Carolyn Cole—LA Times via Getty Images
Ideas
By Christopher J. Hale
Hale is a Democratic politician from Tennessee; he has been a Catholic nonprofit executive and helped lead faith outreach for President Barack Obama.

The scandal over Melania Trump plagiarizing Michelle Obama in her speech to the Republican National Convention Monday isn’t just about plagiarism. It’s also about systemic racism in Donald Trump’s campaign.

Those who argue that this plagiarism scandal is indicative of a campaign that has poor structure and little discipline are missing the bigger point: this act is the fruit of a movement that has used dog whistle politics and, at times, overt racism to win the Republican nomination.

The politics of exclusion were in full force at the convention Monday night as the party aroused the concerns of white Americans with three populations that they think threaten American security and prosperity: immigrants from Latin America, Muslim refugees from the Middle East and “militant” blacks in American cities.

At a panel discussion on MSNBC Monday, Representative Steve King, a Trump supporter, questioned whether nonwhite people had contributed much to society:

As author Courtney Milan noted on Twitter: the very act of plagiarizing a black woman is “racism in action:” “It’s not just plagiarism. It’s plagiarism of a black woman in an election where surrogates say that nonwhite people have added nothing.”

The irony couldn’t be clearer: Trump’s campaign lifted language from Michelle Obama’s speech about the American Dream and shared values, while the GOP candidate has openly doubted that President Obama was truly American and has said that Obama is actively working to destroy our shared values.

Fusion writer Collier Meyerson puts it well: “this plagiarism goes far deeper into the belly of the America’s racist beast: the appropriation of black culture by whites.”

During the lifted portion of Melania’s speech, she said: “From a young age, my parents impressed on me the values that you work hard for what you want in life; that your word is your bond and you do what you say and keep your promise; that you treat people with respect. They taught and showed me values and morals in their daily life.”

If only Donald Trump and his campaign had learned the same lesson. 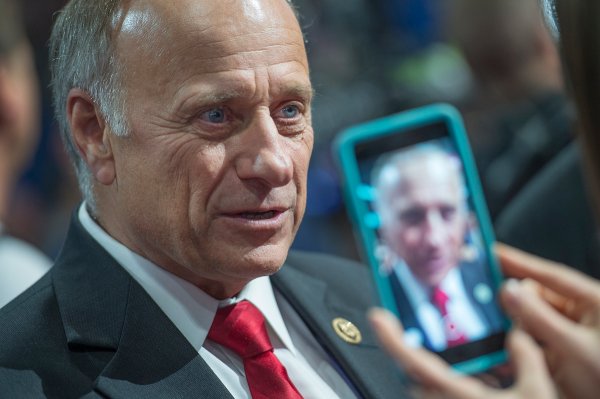 The Problem With Rep. Steve King's Take on the Superiority of Western Civilization
Next Up: Editor's Pick