Sri Muhayati, 75, holds a photograph of her parents on May 6, 2016, in Yogyakarta, Indonesia. Sri spent five years imprisoned without trial for suspected ties to the Indonesian Communist Party
Ulet Ifansasti—Getty Images
By Yenni Kwok

An international panel of judges has declared that Indonesia committed crimes against humanity during the 1965–66 mass killings and that the U.S., the U.K. and Australia were complicit in the crimes.

“The state of Indonesia is responsible for and guilty of crimes against humanity … particularly by the military of that state through its chain of command, of the inhumane acts detailed below,” Yacoob said via video link from South Africa that was broadcast to Indonesia, Australia, the Netherlands, Cambodia and Germany. He listed the brutal murder of an estimated 400,000 to 500,000 people; inhumane imprisonment of around 600,000 people; enslavement in labor camps; torture; forced disappearance; sexual violence; and depriving hundreds of thousands of citizenship.

The 1965–66 bloodbath was triggered by the murders of six generals and other officers on the night of Sept. 30, 1965 and in the early hours of Oct. 1. General Suharto put the blame on the Indonesian Communist Party, better known as the PKI. Helped by Muslim organizations and paramilitary groups, the Indonesian army led a massive witch hunt targeting PKI members and sympathizers, suspected communists and leftists, as well as ethnic Chinese.

The final judgment also goes into detail the role of Suharto in the massacres and draws to attention the false propaganda that “was spread to prepare the ground for violence.”

The tribunal concludes that those acts were intended to annihilate a section of the population and could be categorized as genocide.

It also says that “the United States of America, the United Kingdom and Australia were all complicit to differing degrees in the commission of these crimes against humanity.”

Read: The Look of Silence and Indonesia’s Quest for Truth and Reconciliation

The judges recommend that the Indonesian government apologize to the victims, survivors and their families, and to investigate the crimes against humanity.

But Indonesia immediately rejected the IPT 1965’s recommendations. “Our country is a great nation,” Chief Security Minister Luhut Panjaitan told journalists Wednesday. “We acknowledge and we will resolve this problem [the 1965 tragedy] in our way and through universal values.”

Even before the release of its ruling, those involved with the tribunal have recognized its limitations. “The ruling doesn’t have a binding effect nor is enforceable,” Todung Mulya Lubis, prominent human-rights lawyer who served as the lead prosecutor at the tribunal, told TIME on Tuesday. But, he further said, “the 1965 tragedy happened more than 50 years ago, it is time for the state to take accountability and break the chain of impunity.”

The panel held a four-day hearing from Nov. 10 to 13 in the Hague, listening to 20 witnesses as well as scholars. Some victims of sexual violence gave evidence behind a screen to protect their identity.

Nursyahbani Katjasungkana, a human-rights lawyer and coordinator of IPT 1965, calls on the U.S., the U.K. and Australia to “admit their complicity because it’s been proved from their various diplomatic communications and can’t be denied anymore.”

Read: There Were No Apologies at Indonesia’s First Hearing Into the Savage Killings of 1965

The first-ever government-backed symposium on the 1965 tragedy was held in April. The organizers gave its recommendations to Chief Security Minister Luhut behind closed doors and they have yet to be released in entirety to the public.

For survivors of the 1965 tragedy and their families, the ruling gives them not only a revelation but also validation of their grievances. Says journalist Febriana Firdaus, whose grandfather disappeared half a decade ago: “The final ruling of the IPT 1965 judges have opened my eyes, and maybe the young generation’s, that the events in 1965 need to be discussed so that we get a complete picture of what happened at that time.” 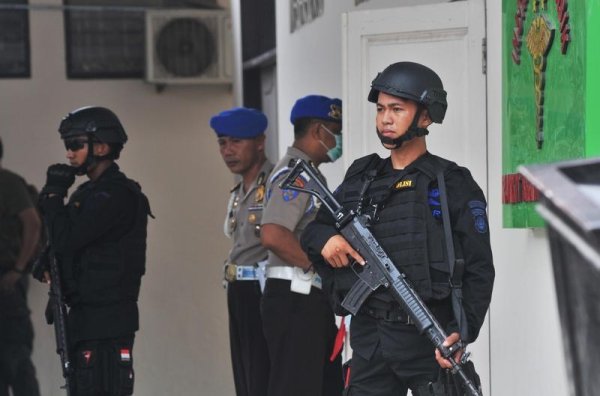 Police Say They Have Killed Indonesia's Most-Wanted Terrorist
Next Up: Editor's Pick