Britain’s new Foreign Secretary, Boris Johnson, said he’s made so many controversial comments about world leaders that it is not worth the time it would take to apologize for all of them.

Johnson faced the U.S. press corps for the first time in his new role following a meeting with Secretary of State John Kerry in London on Tuesday. Reporters peppered him with questions, including whether he told “frankly outright lies” during the country’s recent E.U. referendum campaign, Reuters reports.

Asked if he was going to apologize for remarks about world leaders, Johnson said, “We can spend an awfully long time going over lots of stuff that I’ve written over the last 30 years.”

Johnson was given the job earlier this month by Prime Minister Theresa May, who took charge and appointed a new Cabinet after her predecessor David Cameron resigned over his failure to persuade the country to remain in the European Union. Some 52% of Britons voted on June 23 to leave the bloc, supporting a Leave campaign fronted by Johnson.

It was a controversial appointment thanks to comments the former journalist has made about leaders including Turkey’s President Recep Tayyip Erdogan and U.S. presidential candidate Hillary Clinton, whom Johnson once described as “like a sadistic nurse in a mental hospital.”

Just this past April, the man who is now the U.K.’s top diplomat suggested in a newspaper column that President Barack Obama might have an “ancestral dislike of the British empire” because of the President’s “part-Kenyan” heritage. Johnson insists all such comments have been “misconstrued.”

When pushed on the Obama controversy specifically, the Foreign Secretary Tuesday declined to apologize. “I’m afraid that there is such a rich thesaurus now of things that I have said that have been one way or another, through what alchemy I do not know, somehow misconstrued that it would really take me too long to engage in a fully global itinerary of apology to all concerned,” Johnson said.

Johnson insisted he wanted to “get on with the very heavy agenda we have before us today,” including discussing the ongoing conflict in Syria and the failed coup attempt in Turkey (although he appeared, twice, to confuse the country with Egypt).

Kerry, for his part, said diplomatically that he had been reliably informed Johnson was “a very smart and capable man.” Said Kerry: “That’s the Boris Johnson I intend to work with.” 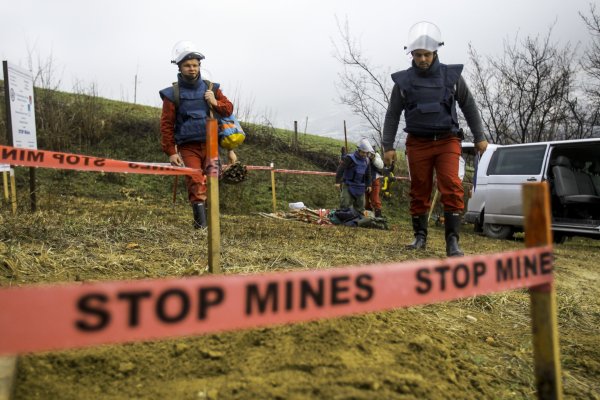 Pokemon Go Players Warned Over Landmines
Next Up: Editor's Pick