Three Views of the Economy: Convention Speakers, Delegates and Economists

Attendees hold signs at the Republican National Convention in Cleveland on July 19, 2016.
Benjamin Lowy for TIME
By Haley Sweetland Edwards

Judging only from a few of the keynote speeches at the Republican National Convention Tuesday night, you’d be forgiven for thinking that unemployment was skyrocketing, job growth was moribund and the American economy was in ruins.

“If opportunity seems like it’s been slipping away, that’s because it has,” Speaker Paul Ryan told a restless crowd. “Wages never seem to go up, the whole economy feels stuck, and for millions of Americans, middle-class security is now just a memory.”

House Majority Leader Kevin McCarthy, who took the podium a few minutes later, struck a similar note. “For eight years we have had a President who promised us so much but delivered so little,” he said. “The lies we were told about Obamacare, the destruction of jobs and entire industries.”

But on the floor of the Quicken Arena in Cleveland, Republican delegates were markedly more optimistic about their economic prospects.

“Michigan’s a comeback state actually,” said Nancy Jenkins, a representative in the Michigan state legislature, who is also serving as a delegate to the convention. “We’ve created 200,000 jobs and reformed our tax structures. We’ve started to see a real difference.”

Jerry Murphy, a retiree and a delegate from Wisconsin, also reported strong economic growth in his state. “Wisconsin’s doing really good—we have low unemployment and a high labor participation rate,” he said.

Zan Bunn, a training consultant from Raleigh, North Carolina, described her state as “Comeback Carolina.” “The economy has greatly improved since 2012,” she said, attributing it to Republican Gov. Pat McCrory’s focus on spending “on core missions of the state.”

Of course, the delegates, who earlier in the day bragged about their state’s beef production or being the home of Prince, are prone to some parochial boosterism.

In nearly every case, the delegates drew a distinction between their own states’ economic recoveries, which they credited to their governors or state legislatures, and what they saw as broader economic decline on the national level.

“I don’t want to call it malaise,” Jenkins said, “but it’s hard out there. I don’t think people are doing well.”

But that’s the thing. Michigan, Wisconsin and North Carolina aren’t outliers. In the eight years since the worst financial crisis in a generation, the U.S. economy has grown significantly, hitting nearly every major benchmark of economic growth.

Unemployment is now less than 5 percent, the U.S. Gross Domestic Product is 10 percent higher than its peak during the George W. Bush administration, and if you control for demographic changes—Baby Boomers retiring, an influx of young Millennial workers, etc.—real wages have been increasing for years.

While the recovery has been inarguably slow and painstaking, the U.S. economy is healthier than most of its counterparts in the developed world, including almost all economies in Western Europe.

Some of this cognitive dissonance is simply a problem with statistics.

For example, on Monday night, Sen. Jeff Sessions lamented the state of median household incomes in America. “Fellow Republicans, we must understand that the incomes of middle-class Americans today are $4,186 per year less than in 1999,” he said. “This is an economic disaster. We are on the wrong track and the people know it.” Other speakers noted the declining labor force participation rate, which hit 62.4% last fall, its lowest point in 38 years.

Both bleak statistics are correct. But economists on both ends of the ideological spectrum point out those aren’t necessarily good measures of a healthy economy, because they fail to take into account how radically the American workforce has changed in the last twenty years.

As families have had fewer children, and as it’s become more common to live alone, American households have shrunk by roughly 3.4% since the late ‘90s. So when Sessions notes that household income is declining, he’s right—but he’s comparing apples and oranges. A four-person household earning the equivalent of $50,000 in 1996 is not necessarily better off than a two-person household earning $40,000 twenty years later.

The declining labor participation rate, meanwhile, can be explained largely by the fact that a huge swath of the Baby Boom generation has retired in recent years—and is therefore out of the workforce—while a large portion of the Millennial generation, the next biggest demographic bubble to push through the economy, is still in school—and therefore out of the workforce, too.

A better measure of the economic health of the U.S. economy is the real incomes of Americans on an individual basis—and on that, the experience of real Americans, like the delegates on the floor of the Quicken Arena in Cleveland, has been improving.

According to the Bureau of Economic Analysis, most individual Americans’ real income grew 1.9% from February to December 2013. In 2014, they grew another 3% and in 2015, they jumped another 4%. The average American today makes 13% more than in 1989, and that number has been climbing steadily since the end of the Great Recession.

That’s not to say the Republicans’ doom-and-gloom economic rhetoric is necessarily bad politics. With sluggish GDP growth, productivity falling and the markets skating on thin ice, betting on a lack of economic confidence among Americans—particularly those who rely on the oil, gas, or coal industries—may be wise. A daily Gallup poll shows a solid 50% report feeling that the economy is getting worse.

It’s a point that McCarthy seems to have internalized.

“In our Republican agenda, our enemies will fear us, our taxes will be fairer, people can afford the health care they want, the people’s voice will be heard, government will help those who truly need it and allow everyone an opportunity to rise,” he said Tuesday night. “So to all those left behind by economic forces out of your control, we hear you.” 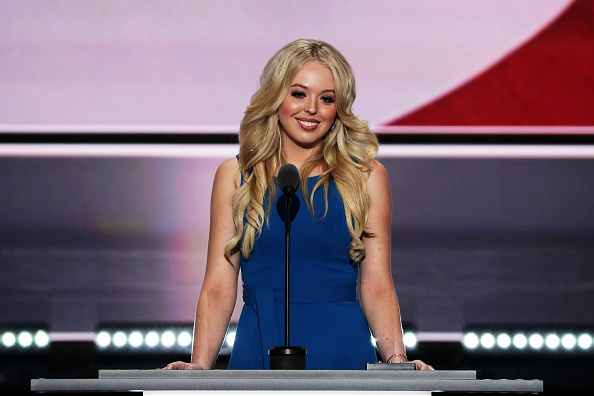 Watch Tiffany Trump Speak at the Republican Convention
Next Up: Editor's Pick