When State Rep. Ken Rizer announced over the summer that he would introduce so-called Blue Lives Matter legislation that would enhance penalties for targeting police, he didn’t think he’d see ambush-style shootings of officers in his home state of Iowa so soon. But then came the deaths of two officers in suburban Des Moines Wednesday morning, both of whom were gunned down a couple miles apart while sitting in their patrol cars. “When I heard about it, I thought, it really happened,” he says.

The Republican from Cedar Rapids initially announced his proposed bill following the shootings of police in Dallas and Baton Rouge—which left eight officers dead and 10 wounded and were committed by people who had expressed anti-police sentiments. But Rizer, who is up for re-election this month, says he got pushback from residents who thought those kinds of incidents wouldn’t happen in the heartland. “Some people said, ‘This is Iowa. We don’t have problems like that. This is a big city thing,'” he says.

But with the death of two Urbandale officers on Wednesday, Rizer believes his proposed bill, which would potentially designate acts of violence against police officers as hate crimes, will have renewed momentum when the legislature reconvenes in January.

Read more: What to Know About the Ambush Killings of Iowa Police Officers

Blue Lives Matter legislation has garnered interest this year among lawmakers who believe police are under siege around the country. It’s in part a response to the growing prominence of the Black Lives Matter movement, which has focused attention on a series of police shootings of African-Americans. Lawmakers in several states say they want to step up penalties for those who commit crimes against officers in an effort to deter threats and acts of violence against them while also showing their support for those in uniform.

In March, Louisiana became the first state to pass Blue Lives Matter legislation, which for the first time made it a hate crime in the U.S. to target police officers. Elected officials in at least five other states—including Florida, Kentucky, New York, Texas and Wisconsin—have proposed similar bills, while “Thin Blue Line” legislation has been introduced in both houses of Congress.

But they’ve run up against opponents who say that hate crime laws should only be used to protect people based on identity characteristics. Historically, those laws have protected crimes that target people for their race, religion, national origin, gender, gender identity and sexual orientation. Blue Lives Matter proponents say police are being victimized in a similar manner.

Read more: How America’s Police Are Responding to Baton Rouge and Dallas

“They’ve become a target as a hate group simply for being someone of authority,” says State Rep. Dennis Baxley, a Republican in Florida, who plans to introduce Blue Lives Matter legislation next year. “It’s hatred towards a group of people for who they are as first responders. It’s an identity that has made them a target of hatred.”

The bills have found support from police unions and organizations around the U.S., including the National Fraternal Order of Police, the largest police union in the country, which has been pushing hate crime legislation for officers for years. And it comes at a time of increased concern over officer safety. Last year, 42 officers were fatally shot in the line of duty, one of the lowest figures on record, according to the National Officers Law Memorial Fund, but through Nov. 3, 52 officers have been fatally shot this year, up from 33 this time last year. The numbers, however, are still well below 1970s figures, when 127 officers were killed on average due to firearms.

The Anti-Defamation League, which was instrumental in writing the first hate crime laws in the 1980s, has opposed Blue Lives Matter legislation in part because all 50 states, as well as the federal government, already have enhanced penalties for killing a police officer, says Michael Lieberman, an ADL director. According to the National Conference of State Legislatures, at least 37 states include increased penalties for assaulting an officer. Lieberman adds that hate crimes protection would only further burden prosecutors because they would have to explicitly prove that a police officer was targeted for his occupation.

“It confuses the purpose of hate crimes,” Lieberman says. “It’s not that we don’t want them protected. We want enhanced penalties, but this is not the best way to accomplish that goal.” Lieberman adds that the ADL would support legislators who believe that current penalties for crimes against officers aren’t enough of a deterrent and want to stiffen them while leaving aside hate crime protections.

In Louisiana, the Blue Lives Matter law allows for an additional penalty of a five-year prison sentence or a $5,000 fine for felony convictions against officers and an additional $500 fine or six months in prison for misdemeanors. That’s in addition to laws on the books that allow for added punishments of $1,000 and five years in prison for battery of an officer, for example, which is considered a felony.

But the state’s new law has run into problems in practice. Police have attempted to use the legislation in two different cases, one involving a person who allegedly threatened to shoot responding officers while talking to a 911 operator, and another involving a man who allegedly yelled racist slurs at police. A judge threw out the hate crimes charge in the first case and police dropped the charge in the second, saying later that the law didn’t apply.

Still, momentum for Blue Lives Matter legislation is growing. This summer, Texas Governor Greg Abbott proposed legislation that would extend protections to law enforcement while increasing criminal penalties for crimes committed against officers. And Congress will likely soon debate a similar bill proposed in March by U.S. Rep. Ken Buck, a Republican from Colorado, which has 16 co-sponsors, all of whom are Republican. Rep. Buck says the bill would allow the federal government to prosecute hate crime cases against police while sending a message to law enforcement that Congress supports them.

In Iowa, Rizer says he’s gotten “great support” for his bill from other legislators and added that he’s not hung up on classifying acts of violence against police as hate crimes.

“I’m not trying to pick a fight with civil rights advocates,” he says. “I want to increase penalties. I want to deter these kinds of attacks. Morale is down, and they feel government doesn’t have their backs. This would be a way to show that we as a society stand with law enforcement.” 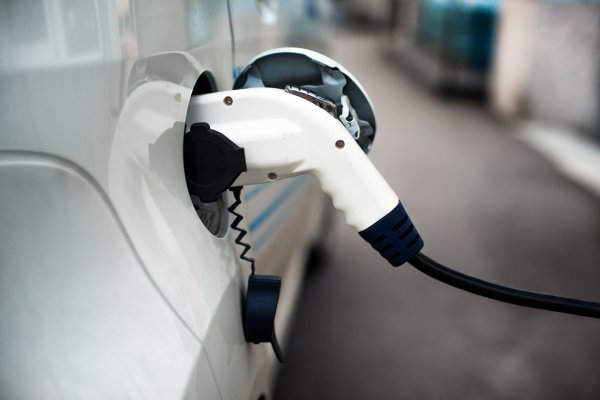 Driving an Electric Car Cross Country Gets Easier
Next Up: Editor's Pick