I'm a Saudi Woman Who Has a Male Guardian. He Is My Greatest Supporter.

Ideas
By Jasmine Bager
Bager is a multimedia journalist who primarily resides in New York City.

It isn’t your imagination: Saudi women seem either scary, scarred or scared to those in the West. The truth is, well, much more layered.

Last weekend, Human Rights Watch released a new report on Saudi women and the big bad, “G” word: “guardianship.” The report, “Boxed In: Women and Saudi Arabia’s Male Guardianship System,” begins by saying: “In Saudi Arabia, a woman’s life is controlled by a man from birth until death. Every Saudi woman must have a male guardian, normally a father or husband, but in some cases a brother or even a son, who has the power to make a range of critical decisions on her behalf.” It also has several animated videos.

In 79 digital pages, Human Rights Watch highlighted some legitimate concerns about the way some Saudi women are being handled by male guardians, such as requiring the guardian’s approval to apply for a passport or accept a scholarship.

A guardian is a close male relative who watches over and protects minors. Boys need guardians until they are of age, then they may become their own guardians, although many boys only become fully independent men after they marry. The women, however, have guardians forever. For a woman, her guardian is like a life-long godparent on all matters, except, often, he is her actual father. Once a Saudi woman marries, her husband becomes her guardian. The bride always keeps her maiden name.

While it is admirable that Human Rights Watch is helping to bring attention to some real issues, not all women face the same fate described on those pages. Smart phones and social media are helping introduced the West to many “real Saudi women” who are willing to go on the record with their varied experiences. I know—because I regularly quote them in my work, and I’m a Saudi woman myself. Not all of us are prisoners in our homes. And many of us are happy to use our full names when interviewed.

Not all Saudi women are the same, just as not all American women are the same. I’m lucky to have great parents who accept and challenge me constantly. My mother is Cuban-American, but I went to a Saudi school and was raised as a Saudi, and that is how I identify. While my background is unusual, it is not unique, and my perspective is just as valid as that of any other citizen. Jeddah (on the west coast of Saudi) will never be Los Angeles—and it’s not even trying to be. I am not speaking on the experience of every Saudi—that would be as absurd as asking a Texan to speak on behalf of all Americans—but I’ll offer my voice.

My Makkah-born father, who is also my guardian, has always been my greatest supporter, in and outside of the Saudi Kingdom. When I got my first media-related job in Saudi many years ago, his first question was: “Do you have enough business clothes? Let me know if you want to go to the mall.” Perhaps because I was privileged enough to work in a Western-style (non-gender segregated) job, my father never signed any document to grant me permission to work. I went to my meetings by myself, cashed checks and commuted on my own. All in Saudi Arabia. While it was true that I needed to be driven around in the country, as women still are not allowed to drive, I regularly traveled to other cities and even countries without my father.

Not only did he encourage my sisters and me to be independent thinkers—he required it. His mother, my “sittu,” was the strongest Saudi woman I had ever met. Although she was illiterate, she taught me how to count money and told me to never let anyone—especially not a man—push me around. She wore red lipstick, tipped well and had strong opinions about everyone and everything. She definitely wasn’t boxed-in. Neither am I.

When I got accepted into Columbia University’s Journalism program four years ago—one of the first Saudis to do so—my father was ecstatic for me. There was never an instant in which he hesitated to “send” me to New York. Both of my parents—and one of my sisters—flew into JFK Airport to help me move in. When I graduated, my father’s first words to me were: “Congratulations, we are so proud of you. Now, let’s eat.” He didn’t say: “Come back with us now, we need to get you married.”

I’m lucky that I can keep my Saudi quirks and my American Dream. I recognize that not every Saudi or American woman can make those claims. That is why I’m using my words to speak for myself here, and write about these other women—of every background.

While I pray that the abusive Saudi guardians mentioned in the report no longer hold these women hostage—that is the reality of many, and it’s worth noting. But it is also worth mentioning that not every Saudi girl or woman is oppressed and not every Saudi man is possessive.

We women, here and there, are slowly lifting the words off the history pages and creating our own narratives. The real revolution will be in the form of pens and paintbrushes. You crack ceilings, we break boxes. 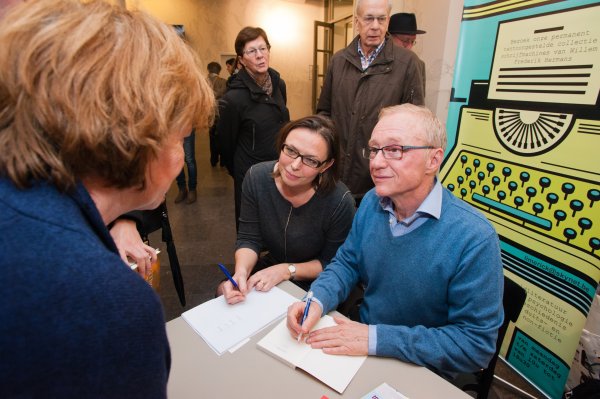 Boycotting Israeli Authors Is an Affront to Free Speech
Next Up: Editor's Pick