Michael Elliott's Final Speech to the ONE Campaign

Michael Elliott, a former editor at The Economist, Newsweek and TIME, died July 14, 2016, after a battle with cancer. Just two days earlier, he had delivered remarks in Washington, D.C., at a celebration of his work for the ONE Campaign, where he served as the president and chief executive officer. This is an edited transcript of that speech.

I just want to say a few words to thank people for the chance to do this job for five years. I’ve worked for ten organizations full time. I made a list of the various occupations for which I’d been paid the other day, and it came to more than 20, from hod carrier to official in the UK Cabinet Office, but this has been the best—well, if you exclude being foreman of a wrecking crew when I got to blow sh*t up—and I owe a lot of thanks to lots of people who have made it so.

I always think these speeches go in the wrong order, because you thank everyone and then you get an “and finally,” the people you really would like to thank, and by then everyone’s at the bar. So in the last few years I’ve reversed it and I’ve put the people who really count up at the top. So the first person I’d like to thank for 42 years of work and more than 40 years of marriage, my lifelong love, is my wife Emma. She has been a rock for me and the kids for years and years. I simply can’t thank her enough.

And then there are our two wonderful daughters, who are such a source of fun and love and success. Bush 41 [President George H. W. Bush], when I was Washington Bureau Chief at the Economist, someone said to him, “What are you most proud of?” And he said, “What I’m most proud of is that my kids come home.” And that’s absolutely what I’m most proud of.

And then a huge, huge thank you to the doctors and the nurses and the technicians, and the administrators at Johns Hopkins, at Sibley Hospital, under the incredible quarterbacking of my absolutely brilliant, brilliant oncologist Channing Paller.

Let me finally turn to my colleagues at ONE and thank them. I want to thank everyone who’s worked for ONE or (RED) in our offices and all over the world, from the garment district in New York, where (RED) is, to the endless skies of Johannesburg. Their amazing hard work and creativity and passion in service to those, who through no fault of their own have been asked to live with stunted life chances simply because of the accident of their birth. When we celebrated our 10th anniversary recently we took the motto: “It’s not about us.” And I am just so proud to have worked with people for five years who have lived there every day, who know the victories, recognition, high fives, rewards, achievements, that we might endure mean nothing, mean absolutely nothing, literally nothing, if they do not directly improve the lives of those we are here to serve.

I’ve said before that I often think that this whole thing has been a terrible mistake. Neither of my parents ever flew. They lived pretty much their whole lives within four miles of where they were born in Liverpool, and I seem to have been traveling ever since I hitchhiked from Liverpool to London when I was 15 years old. And I’ve never really stopped.

And I’ve seen a lot. I’ve seen things you people wouldn’t believe. (All my staff know that I have to drop one movie quote into any speech). I’ve seen that strange light, not quite pink, not quite purple, that bathes Harare with an unforgettable beauty at jacaranda time. I’ve watched from a boat in the harbor as the wall of fire lights up Sydney Harbour Bridge to welcome in the New Year. I’ve hiked to 13,000 feet to a Tibetan yak pasture in northern Yunnan province, in a light so sharp and crisp you thought it could cut you. And when I got back down I’ve drunk Yak butter tea, which trust me you don’t have to do. I’ve hiked the length of the Samaría gorge in the White Mountains of Western Crete, my favorite place in the whole wide world, five times, and I plan to do it again.

And because I wanted to experience it all, good and bad, I’ve also seen the lonely, silent pain of the Pine Ridge Preservation in South Dakota, the legacy of long years of genocide foisted on Native Americans. I’ve seen people shuffling dazed around houses reduced to matchwood in Thailand after the great tsunami of 2004. And perhaps saddest of all, ten years after a vicious civil war stopped, I’ve seen those walls from one end of Monrovia in Liberia to the other, where bullet holes are mixed up with streaks of mold, in something like a weird art installation that belongs in the Whitney or the Tate Modern.

Through it all, what’s always inspired me is the resilience of ordinary people. From children carrying water for hours on the roads of Malawi to women coming in from their villages to markets in San Cristobal de las Casas or LiJiang or Elmina, to sell a few ears of corn or bunches of handcrafts.

And as some of you have heard me say before, whenever I’ve seen sights like that, I’ve gone back to a passage in Derek Walcott’s magnificent poem, Omeros, when he remembers his father taking him as a child to watch women in St. Lucia load a ship with coal.

Kneel to your load, then balance your staggering feet

and walk up that coal ladder as they do in time,

one bare foot after the next in ancestral rhyme.

Because Rhyme remains the parentheses of palms

shielding a candle’s tongue, it is the language’s

desire to enclose the loved world in its arms;

or heft a coal-basket; only by its stages

like those groaning women will you achieve that height

whose wooden planks in couplets lift your pages

higher than those hills of infernal anthracite.

There, like ants or angels, they see their native town,

keep to that narrow causeway without looking down,

climbing in their footsteps, that slow, ancestral beat

of those used to climbing roads; your own work owes them

because the couplet of those multiplying feet

made your first rhymes. Look, they climb, and no one knows them;

they take their copper pittances, and your duty

from the time you watched them from your grandmother’s house

as a child wounded by their power and beauty

is the chance that you now have, to give those feet a voice.”

Now we can’t all win the Nobel Prize in Literature but we can all give those feet a voice. 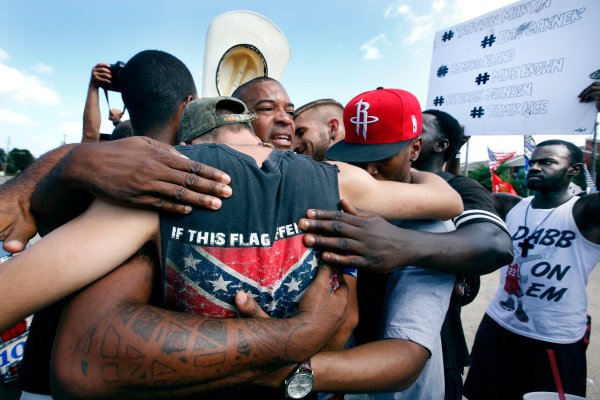 Black Lives Matter Is Not a Hate Group
Next Up: Editor's Pick