In case you need another reminder that much of the 2016 election seems to be on the same maturity level as a middle school student council contest, there’s this: Bernie Sanders supporters are planning a “fart-in” at the Democratic National Convention in Philadelphia next week to protest Hillary Clinton’s nomination.

“For us, this whole thing is a farce, it’s a charade,” organizer Cheri Honkala told NBC News. “They’re creating the illusion of democracy in a very important historical location, Philadelphia, and we’re really saddened by that.”

In response, she and her group, the Poor People’s Economic Human Rights Campaign, are planning to act out an idea that some attribute to Saul Alinsky, a community organizer who once threatened a “fart-in” protest in Rochester, N.Y. Protesters are preparing to create a shantytown in one of Philadelphia’s poorest neighborhoods, where they say they plan to eat beans and other gas-inducing foods before they head to the convention hall on July 28 to, well, “make a stink.”

Let’s just get this out of the way: Farts are funny. They can also conveniently serve as a literal representation of the idea that there’s something stinky about our democratic process. And sure, why not? Flatulence can be free… speech.

Calling for improved health care and economic justice is a worthy cause. But is the medium for the message necessary?

For attention, maybe. (It’s possible the protest theme itself is a farce.) Over-the-top tactics can help cut through the noise of the constant election coverage. For example, at the Republican National Convention this week, the story of 100 women posing nude to protest Donald Trump drew attention to the group. And stories of women calling Indiana Governor Mike Pence’s office to talk about their periods in response to his policies on abortion resurfaced when Trump picked Pence to be his vice president.

But for the supposed goal of protests—lasting, meaningful change—it’s uncertain whether splashy shows can have much of a long-term effect. The counter to that argument is, of course, that if silly things can get people talking about serious issues, why not?

Perhaps that’s enough. In an election in which candidates have debated the size of their hands and protestors have erupted into senseless brawls, it might be wishful thinking to ask that we all just grow up. 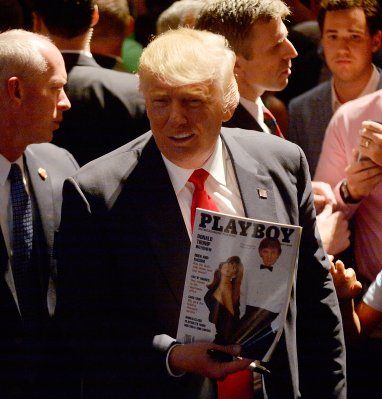 Political Correctness Is An Absolute Must
Next Up: Editor's Pick