President Barack Obama delivers a speech during a memorial service for the victims of the Dallas police shooting at the Morton H. Meyerson Symphony Center in Dallas on July 12, 2016.
Bilgin S. Sasmaz—Anadolu Agency / Getty Images
By Lily Rothman

In an open letter to America’s law enforcement community on Monday, President Obama praised the way in which police officers “put others’ safety before [their] own, and…remind us that loving our country means loving one another”— even in a time of deep divisions. In addressing those divisions, Obama turned to words spoken nearly a half-century ago by Robert F. Kennedy: he “lamented in the wake of unjust violence a country in which we look at our neighbors as people ‘with whom we share a city, but not a community,'” the president said.

Though the President did not elaborate on the context of that RFK speech, the “unjust violence” Obama mentioned was one of the most significant such acts in American history.

The speech in question was delivered on April 5, 1968, to the Cleveland City Club by the man who was, at the time, a Senator from New York and a major candidate for the Democratic nomination for president. Just days before Kennedy spoke in Cleveland, incumbent president Lyndon Johnson had announced that he would not seek reelection, giving a further boost to Kennedy’s prospects. But, just the day before, on April 4, Martin Luther King Jr. had been shot.

It was thus, Kennedy said, not a time to stump for the nomination.

“This is a time of shame and sorrow. It is not a day for politics,” he said. “I have saved this one opportunity to speak briefly to you about this mindless menace of violence in America which again stains our land and every one of our lives.”

And, in that context, Kennedy turned away from his hopes for the White House to share his ideas about American violence — which, in his speech, encompassed a wide range of bloodshed: riots in American cities; killings that took place “in the name of the law”; civilian deaths in foreign lands, which triggered only numbness from the American public; fictional bloodshed on television; the sniper’s bullet that had killed a civil-rights leader in cold blood. But, he said, that wasn’t all:

Kennedy proposed no specific programs to address those problems, but made it clear that he believed it was time for the government and the people both to act to “achieve true justice among our fellow citizens.”

Whether a Kennedy administration might have achieved more specific steps toward that goal would never be revealed. Robert F. Kennedy was assassinated about two months after delivering that speech. 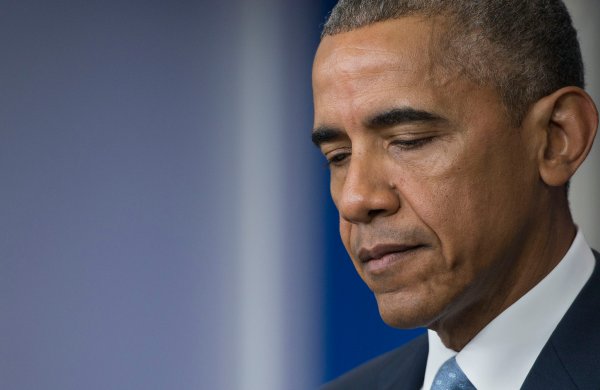 Read President Obama's Open Letter to U.S. Law Enforcement: 'We Depend on You'
Next Up: Editor's Pick