John Kerry holding a joint press conference with British Foreign Secretary Boris Johnson after their meeting at the Foreign and Commonwealth Office in London, July 19, 2016.
US State Department/EPA
By Massimo Calabresi

For the last five days, Secretary of State John Kerry has been locked in a fight between order and chaos, and it’s not clear who is winning.

After standing with French President Francois Hollande to celebrate Bastille Day in Paris on Thursday morning, Kerry flew to Moscow for four hours of talks with Russian President Vladimir Putin in an effort to restore a partial ceasefire to Syria. Kerry struck a tentative deal on broad principles, but his diplomatic skein was torn to pieces within hours by news of the terrorist attack that killed 84 people and wounded hundreds in southern French city of Nice.

Kerry stayed in Moscow on Friday determined to push ahead on the diplomatic effort. “People all over the world are looking to us… to end this terrorist scourge,” Kerry said before launching into talks with Russian Foreign Minister Sergei Lavrov on the Syrian ceasefire proposal. Ten hours later, during the two diplomats’ final one-on-one session, State Department aides saw reports on Twitter about apparent unrest in Istanbul. By the time Kerry emerged, it was clear that a coup underway in Turkey.

Asked about the situation minutes later at a news conference, when the outcome of the coup was still uncertain, Kerry cautiously called for “stability and peace and continuity within Turkey.” But it was clear that the forces of global chaos had the upper hand. And that remains true days after Turkish President Recep Tayyip Erdogan narrowly managed to suppress the putsch attempt. Longstanding disagreements between Ankara and Washington over democratic reform and tactics in the fight against ISIS across the border in Iraq and Syria are getting worse, not better, as the after-effects of the coup roil the relationship.

Things may get worse before they get better. U.S. officials privately worry about the future of American access to the Incirlik Air Base in southern Turkey, a key launching pad for the projection of U.S. power into Syria, Iraq and beyond. (Turkey cut power to the base, and to date, has not yet restored it, though U.S. missions from the base have resumed.) Some also fear that Turkey’s membership in NATO, long the anchor of the Atlantic alliance’s southeastern front, could become an issue in the widening rift with the U.S. just as the alliance is struggling to show cohesion in the face of Russian aggression in eastern Europe. And the most pessimistic officials fear for Turkey itself, with its military weakened in the wake of Erdogan’s vast post-coup purges.

No one in Washington is panicking yet. The U.S. and Turkey have multiple overlapping interests that can bridge even widening differences over common values and a democratic world view, senior State Department officials say. Multiple recent terrorist attacks by ISIS supporters pose an immediate threat to Turkey, giving it a reason to continue to work with the U.S. “Our coalition’s effort to defeat ISIS is crucial for Turkey,” says one senior State Department official. By the same token, the U.S. need for Incirlik access will necessitate looking the other way on much democratic backsliding in Turkey—a trend well underway even before the attempted coup. The question is just how bad things will get before stability prevails.

As he waited for the media to file their stories before taking off from Moscow on Friday, Kerry called the Turkish foreign minister, Mevlut Cavusoglu, for the first several conversations the two would have in coming days. Though the coup was still underway, Cavusoglu was calm, and seemed to feel neither he nor his government were under a severe threat. Others were less sure. On the way to the airport after the conversation with Cavusoglu, Kerry called the U.S. ambassador to Turkey, John Bass, to figure out how much of a threat the coup might pose to the many Americans who were thought to be in Turkey on business and tourism.

In retrospect, it seems Cavusoglu had been overly confident. Though they have been portrayed as bumblers, the coup plotters were in fact well-organized, well-armed and came within a hair of succeeding. They deployed helicopters to major cities and tanks to the main bridges across the Bosporus in Istanbul. They launched F-16 fighters, and refueled them from Incirlik—apparently without the knowledge of the U.S. forces based there.

Erdogan claimed in an interview on CNN on Monday that he came within 10 or 15 minutes of being captured or killed by rebel soldiers at his hotel in the southwestern Turkish city of Marmaris. And he may have been saved by technology. Rebels were on their way to CNNTurk, the Turkish language CNN affiliate in the country, but arrived only after the station had broadcast Erdogan’s appeal to his countrymen, made via FaceTime, to come into the streets in defense of democracy. Western experts attribute the coup’s failure to the public response that followed that call, as Turks flooded the streets in Erdogan’s power base of Istanbul.

For their part, the coup plotters were tech savvy, as well—not the least in keeping their plans secret. Few in Turkey, or anywhere else, saw the coup coming. That was due in part to the plotters’ use of encrypted WhatsApp messages, according to Amb. Matthew Bryza, a recently retired State Department official who oversaw policy in southeast Europe and is now at the Atlantic Council. “This is the first coup in history that was WhatsApp generated,” Bryza said July 18.

The U.S. is still trying to make sense of the origins of the plot. Administration officials are skeptical of Turkey’s accusations against the Pennsylvania-based cleric Fethullah Gulen, but are not ruling them out. Erdogan, who has long been convinced of Gulen’s desire to overthrow him, stoked tensions with Washington in the aftermath of the coup by accusing the U.S. of harboring a fugitive. Kerry and other State Department officials have encouraged Turkey to present any evidence of Gulen’s involvement and have said they will handle any extradition request in accordance with the bilateral treaty that lays out the procedures for sending criminals back for trial.

For all the attention the Gulen charges have received in the media, there are plenty of other ways things can get worse between Turkey and the U.S. well before the long, slow process of extradition could play out. Not least of those is the disagreement over how Erdogan should proceed in the wake of the coup.

Five minutes after he got off the phone with Amb. Bass, Kerry got a call from President Obama. They went over the security situation but quickly turned to what the U.S. message should be. “It was not a hard call for us to stand up for Turkish democracy and rule of law, and against the notion of use of force to take power,” the senior State Department official said. Minutes later, at 7:02 p.m., Obama issued a statement saying that they had “agreed that all parties in Turkey should support the democratically-elected Government of Turkey, show restraint, and avoid any violence or bloodshed.”

The gap between Kerry’s initial, cautious comments and the release of the statement from the White House backing the Erdogan government was barely two hours, but it was enough to encourage those in Ankara and elsewhere in Turkey who already harbored anti-American suspicions. “We would have thought that our allies and everyone in the international community would promote Turkish democracy and promote democracy in general, would be more vocal much sooner,” said Ravza Kavakci Kan, a member of Erdogan’s political party from a district in Istanbul. “We really felt lonely and people are really, really saddened by that.”

Others are angry, and inclined to exploit the appearance of a U.S. delay. One Turkish cabinet minister accused the U.S. of secretly being behind the coup plot. The perceived attacks on America prompted Kerry to make his second call to Foreign Minister Cavusoglu Saturday. Kerry told his counterpart that “public insinuations or claims about any role by the United States in the failed coup attempt are utterly false and harmful to our bilateral relations” according to the public account of the call released by the State Department.

But Kerry was doing his own pot stirring. At a news conference Monday in Brussels where he was attending EU meetings, Kerry warned Erdogan against using the coup as a pretext for rounding up his political enemies. In the days after the putsch attempt, the Turkish Prime Minister had taken action against thousands of police, judges and members of the military. While it was to be expected that Erdogan would seek to bring to justice those responsible for the coup, Kerry said, “We also caution against a reach that goes well beyond that, and stress the importance of the democratic rule being upheld.”

Even more aggressively, Kerry raised the question of Turkey’s NATO membership, suggesting that anti-democratic behavior by Erdogan could imperil the country’s place in the alliance. “NATO also has a requirement with respect to democracy,” Kerry said, and added said NATO would “measure” Turkey’s actions in days to come. “Obviously, a lot of people have been arrested and arrested very quickly,” Kerry said. “The level of vigilance and scrutiny is obviously going to be significant in the days ahead. Hopefully we can work in a constructive way that prevents a backsliding.”

Turkey’s membership in the NATO alliance is a matter of major strategic importance to the U.S., and talk of the country being ousted caught some experts by surprise in the U.S. Amb. Bryza of the Atlantic Council said Kerry’s comments were being taken as threats in Turkey, and that it was an “extreme misinterpretation that we would kick them out of NATO.”

Part of the concern is that NATO is already under pressure from Russian expansionism in Ukraine and espionage operations in the Baltics. Talk of weakening the alliance further worries those who want to ensure it remains a strong deterrent against Moscow. Others worry about the fate of U.S. access to Incirlik. But the possibility of deteriorating relations between the U.S. and Turkey aren’t the only potential downside to fallout from the coup. Turkey itself could be in danger, some State Department officials believe. With the raging civil war in neighboring Syria, a weakened military could leave Turkey vulnerable to stepped up ISIS attacks or renewed separatist activity by the Kurds.

“Turkey’s capacity to address keeping the country safe is a concern for us,” says the senior State Department official. That’s not merely a matter of interest for U.S. immediate concerns in the fight against ISIS. “We have an interest in Turkish democracy writ large,” the official says.

For all the dark scenarios, Turkish nationalism and the Turkish population’s response to the coup suggests the country is unlikely to shatter as neighboring Syria and Iraq have. It was notable that all of the opposition parties in Turkey repudiated the coup—even though they have major differences with Erdogan. The U.S. intends to continue supporting Erdogan’s efforts to re-establish calm, while pushing back on his expanding purge and his anti-Americanism.

But Kerry will have his hands full worldwide in his final six months in office. The British departure from the E.U., the spike in global terrorist attacks as ISIS comes under pressure in Syria and Iraq, and the continuing challenge of managing post-coup Turkey, mean that a major part Kerry’s job now is to rally international support and use America’s diplomatic tools to restore order to a fracturing world. 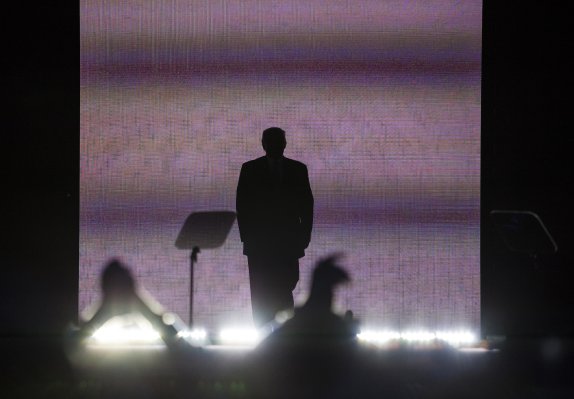 Queen Is Not Happy That Donald Trump Used Their Song at the Republican Convention
Next Up: Editor's Pick