Donald Trump’s campaign blamed Hillary Clinton on Tuesday for the backlash to Melania Trump’s convention speech, as the presumptive Republican nominee’s wife faces accusations of plagiarism due to strong similarities between her speech and Michelle Obama’s convention address in 2008.

“They’re not words that are unique words,” Paul Manafort, Donald Trump’s campaign manager, told TIME. He added that there was nothing wrong with the speech and said it wouldn’t be necessary to fire anyone.

Asked about Republican National Committee Chairman Reince Priebus’ comment that he would “probably” fire the speechwriter if it were up to him, Manafort told TIME: “Frankly if I knew somebody did it, I’d fire them too.”

A passage in Melania Trump’s address used several of the same lines and phrases as Michelle Obama’s 2008 speech. “Barack and I were raised with so many of the same values: that you work hard for what you want in life; that your word is your bond and you do what you say you’re going to do,” Michelle Obama said in 2008.

“My parents impressed on me the values that you work hard for what you want in life: that your word is your bond and you do what you say and keep your promise,” Melania Trump said on Monday.

In interviews and at a press conference Tuesday morning, Manafort defended Melania Trump and accused Clinton of making it an issue — something her communications director refuted.

Clinton has not officially commented on the speech, but other Democrats have spoken out. Democratic National Committee Chairwoman Debbie Wasserman Schultz said the Trump campaign will “have to answer for the content” of the speech.

“There’s a political tint to this whole issue,” Manafort said at a press conference. “We’ve noted that the Clinton camp was the first to get it out there and trying to say that there was something untoward about the speech that Melania Trump gave. It’s just another example, as far as we’re concerned, that when Hillary Clinton is threatened by a female, the first thing she does is try to destroy the person.”

He made the same argument while speaking to CNN. “This is once again an example of when a woman threatens Hillary Clinton, how she seeks out to demean her and take her down,” he said, adding that the speech included “common words and values” and dismissing accusations of plagiarism as “just really absurd.”

“We don’t believe there’s anything in that speech that doesn’t reflect her thinking,” Manafort said at the press conference. “We’re comfortable that the words that she used are words that are personal to her.”

Former Obama staffers, meanwhile, criticized the speech for its strong similarities. Jon Favreau, former chief speechwriter for Barack Obama, called them “nearly identical” and said someone should be “seriously fired.” Stephanie Cutter, who was Michelle Obama’s chief of staff during the 2008 presidential campaign, praised the work the First Lady put into the 2008 speech.

“Yeah, plagiarism is bad. What’s worse is that she’s supposed to know Trump best & couldn’t write an original speech about him. Says somethin,'” Cutter wrote on Twitter. “Michelle Obama worked for weeks on her speech & it was 100% from her heart. Gave America best lens possible into husband’s values & vision.” 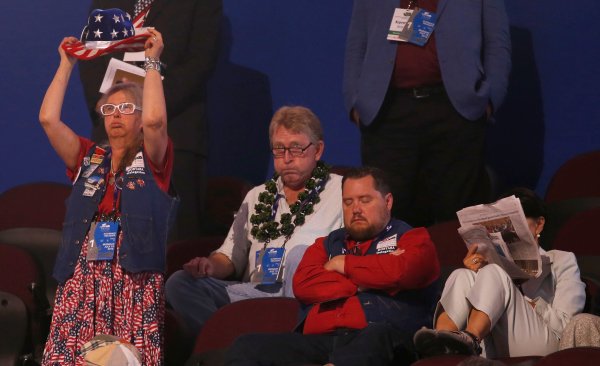