This is what it looks like when Donald Trump throws a political convention.

The first night of the GOP’s quadrennial bash was supposed to soothe the wounds of a bitter nominating fight, promote party unity and prove that an unorthodox candidate could hew to political norms when he chose. The results were spotty.

After an opening session marked by a suppressed delegate revolt, the evening program was short on star power and conspicuous for its absence of marquee politicians. Trump even stepped on the nationally televised proceedings by scheduling his own interviews during the event.

Which was fitting in a way. While there was plenty of Trump praise, much of the spectacle seemed to unfold in a parallel universe, one in which the party might unify around animus for enemies rather than its own presumptive standard bearer.

All the stylistic trappings of a conventional conventions were present: the balloons on the ceiling, the funny hats, the red-white-and-blue markers for state delegations. But the substance was unusual for a program meant to showcase an an optimistic party before a nationally televised audience.

The night’s theme was “Make America Safe Again,” and its opening hours offered a glimpse into the party’s fears. A series of emotional speeches about the threat of illegal immigration and the 2012 terrorist attack on the U.S. consulate in Benghazi, Libya, stirred the faithful from their seats.

People pose for a group photo at the 2016 Republican National Convention on Monday, July 18, 2016, in Cleveland.
Landon Nordeman for TIME

Presumptive Democratic nominee Hillary Clinton’s name came up almost as often as Trump’s. “She lied to me and then called me a liar,” thundered Pat Smith, the mother of former foreign service officer Sean Smith, a victim of the Benghazi attack. Breaking from her prepared speech text she ad-libbed in a striking call from the convention stage: “Hillary for Prison—she deserves to be in stripes.”

Read More: Watch the Emotional Speech From the Mother of a Benghazi Victim

Much of the Benghazi narrative offered on stage had been discredited by U.S. government sources, including the Republican House Benghazi Committee report.

The recent murders of police officers in Dallas and Baton Rouge, La., echoed through the day, which opened with a moment of silence in tribute to the fallen. “Blue Lives Matter!” declared Milwaukee County Sheriff David Clarke, drawing rousing cheers. He also drew cheers when he touted the acquittal of the fourth officer in the Freddie Gray murder trial in Baltimore.

A series of overlong speeches pushed brighter lights out of prime-time. Iowa Sen. Joni Ernst, one of the few politicians on the speaking slate with broad appeal to swing voters, was relegated to a joint speaking slot after 11 P.M., when most of the delegates had fled the conventional hall in search of bars.

Instead of appealing to general election voters, the night’s events seemed designed to tap into the Republican Party’s id. From Benghazi to illegal immigration, the Baltimore police shootings to welfare recipients, the convention dove headfirst into the hotsprings of conservative anger.

Murder and mayhem drew an inordinate amount of air time. Several parents spoke of the murders of their children. During one dual speech, a pair of CIA contractors compared their counter-assault on insurgent forces in Benghazi to a game of “Whac-a-Mole,” as they recounted the killing of four Americans between playful banter. One of the contractors joked about his colleagues putting gauze in his ear during a firefight in Libya. “It’s really funny. It looks like he has a tampon,” he said.

Read More: The True Story Behind the Benghazi Movie 13 Hours

Conventions are one of the few campaign milestones a candidate can control—a four-day opportunity to make the pivot to the general election. But the opening night of the Trump Show in Cleveland more closely resembled events like the annual Conservative Political Action Conference, which are meant to gin up the base, not expand it. In the aftermath of the 2012 election, a report commissioned by GOP officials argued the party’s fortunes in 2016 hinged on the passage of comprehensive immigration reform. On Monday night, one of the marquee speakers was Alabama Sen. Jeff Sessions, a proponent of lower immigration levels, who hailed Trump’s promise to wall off the Southern border.

The speakers list was filled with regulars on the conservative circuit and a smattering of rising stars in the movement. Their messages were aimed against radical Islam, those in the U.S. illegally, and the protest movements against incidences of police violence against minorities.

Former New York City Mayor Rudy Giuliani delivered a barn-burner of an address that had the audience on its feet denouncing radical Islamic terrorism: “You know who you are, and we’re coming to get you,” he said.

Then came Trump himself, appearing in dramatic silhouette and striding onstage to introduce his wife. Melania Trump, a former model and Slovenian immigration, delivered a game keynote speech before a big and unfamiliar audience. But her speech included few personal anecdotes or humanizing touches to soften skeptics of her husband.

Which made it an apt coda for a night that looked good, with lots of pomp and pageantry, but included little to persuade swing voters. 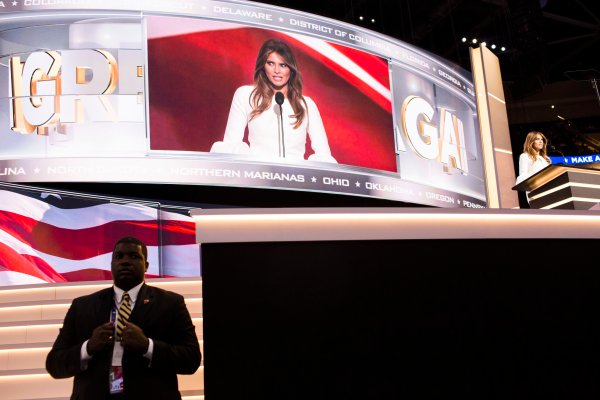 The Perfect Discomfort of Melania Trump's Convention Speech
Next Up: Editor's Pick