The Surprising History Behind the Word Pokémon

Pokemon GO game on a smartphone, in Berlin, on July 14, 2016.
Thomas Trutschel—Getty Images
By Katy Steinmetz

If a bewildered Boomer turned to an online dictionary these last few weeks, hoping to make some sense out of all this Pokémon business in the news, they likely would have been greeted with a correction. Did you mean pikeman, a soldier armed with a pike? Or perhaps the shell membrane, putamen? Maybe pygmaean, that which is typical of pygmies?

As of Tuesday, however, this set will get the results they’re looking for on Dictionary.com.

The word is among more than 300 in the dictionary’s editors latest batch, and they say that the timing is a coincidence. This trademark just happened to be in their definition queue right as a viral mobile game by that name took the world by poké-storm. But it’s dovetailing with a “surge in lookups” that they’re seeing now and is timely evidence that this Japanese-spawned term has become an English word in its own right — even though it was kind of English to begin with.

The name of Nintendo’s lucrative franchise was created through a process known as wasei eigo. That phrase, says language writer John Kelly, literally means “Japan-made English” and refers to the process of Japanese speakers taking “English nuts and bolts” and “assembling them into new Japanese words.” In rare cases, if the term proves popular or useful enough, it then gets borrowed back by English speakers, coming full circle, poké-style.

In a common version of this process, Japanese speakers start with English words — in this case the raw materials were pocket and monster — and then “transmogrify” them so they sound like a more typical Japanese phrase and describe a novel concept, Kelly says. The words get spelled out in a Japanese writing system used for foreign words, called katakana, so academics call this step “katakanization.”

Launching his game in the mid-90s, developer Satoshi Tajiri took the first syllables of each of those katakanized words— poketto monsutā — and mashed them together. Hence the three-syllable word in the title of the most popular mobile game in U.S. history. English becomes Japanese becomes portmanteau becomes English.

Kelly, who specializes in writing about etymology, points to other examples of words that went through the wasei-eigo machine and ended up back in English dictionaries. There’s salary man, a term for a white-collar businessman that was invented by the Japanese; they pronounced it sararī-man before English speakers re-Anglicized it. Another example is cosplay — the practice of dressing up as a character from a film, book or video game. Japanese speakers turned the words costume and play into kosupure, which became cosplay when English speakers welcomed their root words back in a new form.

Perhaps the best known example is karaoke. Its root, explains Nagoya University‘s Nathan Hopson, are the Japanese word for empty (kara) and the katakanized word for “orchestra” (ōkesutora). As he has written, the popularity of that word in English and around the world is a testament to “the ways in which language becomes globalized in thickly tangled webs of exchange.”

Other examples that never got taken up in America are romansu gurē (romance + gray), a Japanese word for a middle-aged lover. There is wan patān (one + pattern), an adjective that describes “that which is overdone.” Though academics have outlined competing theories about what exactly is going on when Japanese speakers coin new words based on foreign ones, Kelly emphasizes that it is not a “poor attempt” at English. “It’s not trying to do a one-to-one translation,” he says. “It’s making something wholly new.”

Showing up in a dictionary isn’t an absolute testament to whether a foreign-derived word is part of standard English, though it’s evidence you would use to make a case if you were, say, playing high-level Scrabble. Beyond that, there is other evidence that Pokémon has taken on a life of its own on this side of the Pacific.

People are breaking it apart and forming new words, like pokémania, to describe the widespread, wild adoption of Pokémon Go. Presidential candidate Hillary Clinton “verbed” the title of the game, punnily saying she wished she could figure out how to get voters to “Pokémon Go to the polls!” And while in Japanese, pokémon would be the singular and plural form, English speakers are describing the pet monsters as “pokémons,” much like how they say and write “emojis,” which comes from the Japanese words for picture (e-) and character (moji).

For his part, Kelly believes that a foreign word becomes an English one when lots of people are “using it very naturally and smoothly across a variety of contexts.” That uptake often happens quicker when the word fills a specific role, giving people a term that describes something no other string of letters can. And whether you are obsessed with them or desperately tired of hearing about them, those pet monsters go by no other name.

“It’s like karaoke on steroids!” Hopson says of Pokémon. “Two English words, katakana-ized, chopped in half, glued together, and then shipped back out to take over the world.” 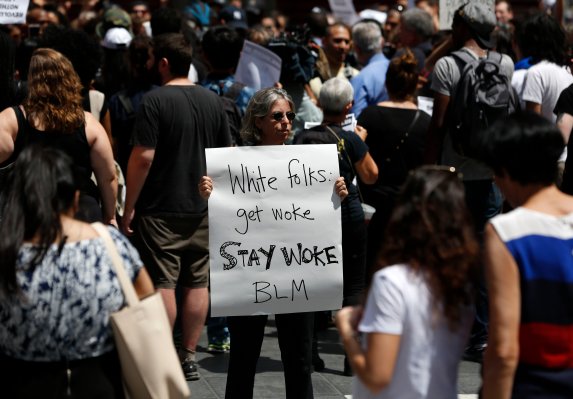 Dictionary.com Adds 'Woke,' 'Pokemon' and 'Butthurt'
Next Up: Editor's Pick