Meet the Rising Star Who Spoke at the Republican Convention

Sen. Tom Cotton hopes that his speech at the Republican national convention will be a precursor to another in four or eight years accepting the nomination.

The freshman Senator from Arkansas, a rising star in the Republican Party, spoke about the need for a strong military, mentioning presumptive nominee Donald Trump’s name exactly once.

“My generation has fought, is fighting and will fight so that my infant son Gabriel will one day live in peace,” he said. “And for that cause I speak tonight not only to the millions of Republicans but to Independents and Democrats looking to make America safe again.”

Read More: Transcript of Cotton’s Speech at the Republican Convention

Unlike many freshmen, Cotton didn’t take the backbench in the Senate. In his first few months of office, he introduced a letter calling into question President Obama’s authority to negotiate a nuclear deal with Iran that garnered support from 47 of the GOP’s 54 Republican senators.

Cotton has long been impatient: he finished Harvard in just three years, abandoned a masters at Claremont Graduate University after just a year because he found academic life “too sedentary,” he’s said. He eventually got a law degree from Harvard. He eschewed joining the Judge Advocate General Corps in favor of becoming an infantryman on the front lines, serving in Iraq in 2006 and Afghanistan in 2008.

Cotton was elected to the House in 2012 and the Senate just two years later—light speed in political terms. So it’s not surprising that Cotton, at 39 the youngest sitting Senator currently in office, might have ambitions to even higher office in the near future. 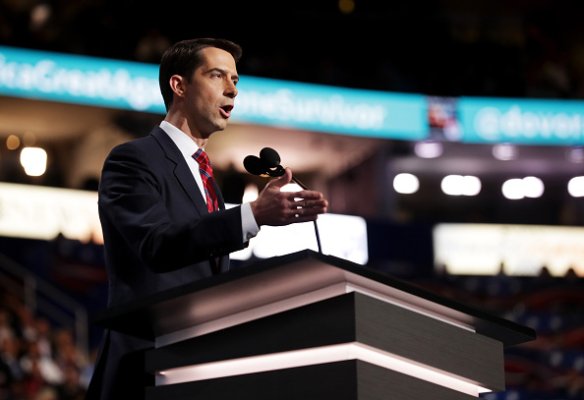 Read Tom Cotton's Speech at the Republican Convention
Next Up: Editor's Pick