Trump Takes Two Steps Forward, One Step Back on Abortion

Over the past year, Donald Trump shattered the assumption that the Republican nomination could be won only by a hawkish, pro-abortion candidate. He got this far by embracing being himself, no matter how offensive or counter to Republican orthodoxy.

Though Trump’s core belief is that he is wonderful, and that any decision or utterance is brilliant by origin, Trump’s positions on abortion and LGBT rights are anathema within the party, and he deserves credit for sticking with his beliefs upholding personal equality.

Instead of the draconian anti-abortion platform of the party’s recent history, Trump believes in exceptions in cases involving rape, incest and protecting the life of the mother. For most of his public life, Trump proclaimed he was “very pro-choice” but “hated abortion,” telling NBC’s Tim Russert that he would even uphold “partial birth abortions.”

In the crowded field of Republican presidential wannabes, Trump’s policy deviation in these areas counted as refreshing progress, and that’s part of what propelled him to the nomination. Contrary to the depiction of Republicans as obsessed with abortion, many party voters and members are sick of it.

“Unless you can turn back Roe versus Wade, abortion shouldn’t be any part of what we talk about as the Republican Party,” a Georgia delegate told me yesterday in Cleveland, estimating that pro-life policy mattered to roughly a third of Republicans in her district.

But instead of sidelining the hard right, the thrice-married Planned Parenthood donor decided to bow to it by choosing as his running mate Indiana Governor Mike Pence, a culture warrior who supports abortion restrictions that are among the strongest in the country.

By tapping Pence, Trump decided to stop challenging conventional wisdom and instead follow a more traditional playbook. It’s a move that may prove costly, if not fatal, going into a general election race in which his popularity among women is already dismal. With Pence on board, we may never know whether women care about a moderate stance on reproductive rights, or if Trump’s outrageous misogyny had dashed any chance at the women vote.

Give the evangelical movement credit for this much: this is the first time Trump has given more than lip service to any faction of the Republican party, and it’s not even a wing of the party he needed to win over.

Trump had already captured the evangelical vote before he even announced Pence. A Pew poll conducted in mid-June and released last week shows 78% of evangelicals lining up behind Trump—slightly more than supported Mitt Romney during the same time frame in 2012.

Trump’s fired (for now) former aide Corey Lewandowski famously advised the campaign to “let Trump be Trump.” The Pence pick looks like the opposite. And it risks alienating a raft of constituencies—independents, women and moderate Democrats—who might otherwise pull the lever for Trump, all in a bid to maximize evangelical turnout.

The 1980 presidential election was the first to feature a noticeable gender gap and change how campaigns viewed women voters. That year’s convention platform rejected endorsing the Equal Rights Amendment—which the GOP had advocated since 1940—and instead pitched a constitutional amendment to ban abortions except for when a mother’s life was at risk.

Abortion again divided the party at the 1992 convention; First Lady Barbara Bush argued against including harsh anti-abortion language in the platform. Notably, only a four-point gender gap separated Bill Clinton and George H.W. Bush—the lowest of the last nine elections.

Before the 1996 Republican convention, Senator Bob Dole—the last presidential candidate to count Trump aide Paul Manafort as an advisor—faced female protestors with “Yank the Plank” signs sailed in a pro-choice protest in the San Diego bay. As an olive branch to women and moderates in the party, Dole, who was eager to avoid a floor fight over abortion, asked pro-choice Republican Congresswoman Susan Molinari to give the convention keynote address. “Let’s be realistic, we cannot be a one-issue party,” the pro-life Dole told CNN’s Larry King.

In 2004, the George W. Bush campaign kept contentious culture wars outside of the convention hall by having invitation only, closed press events for Christian conservatives, such as the rally hosted by Sen. Sam Brownback of Kansas where he proposed forcing any doctor performing an abortion to administer anesthesia only to the fetus, not the pregnant mother.

After months of Trump’s misogyny, from commenting on the menstrual cycle of a television anchor to advocating that women who receive abortions should be punished, it’s almost quaint that 2012 Republican nominee Mitt Romney blundered with his “binders full of women” comment. At least there was recognition of the problem: The GOP’s comprehensive post-2012 autopsy cited the party’s extreme unpopularity among women as an issue to address. “Our inability to win their votes is losing us elections,” the report concluded.

Trump looks on track to repeat and add to 2012’s failure with women. While Trump may not need all women, he needs some of them. Though Obama won the women vote by 11 points in 2012, Romney won married women by seven points. Trump needs to keep this critical sector of women instead of continuing to repel them.

And while it’s still early, one thing is for sure: Governor Mike Pence likely will not help that problem. 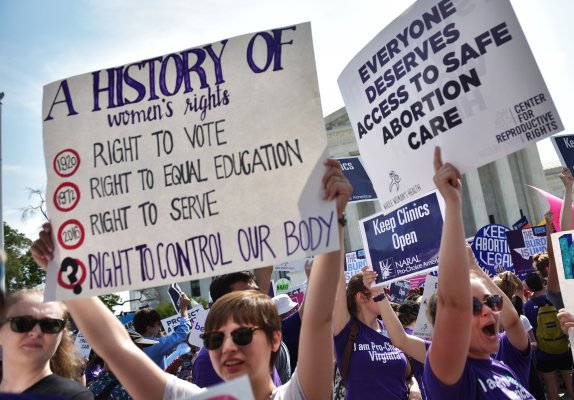 Nancy Northup: Women's Rights Were 'On the Brink'
Next Up: Editor's Pick