Bedlam erupted at the Republican convention Monday afternoon as party officials used a procedural maneuver to put an end to the haphazard Never Trump movement.

Rival chants of “shame-shame-shame” and “Trump-Trump-Trump” took over the Quicken Loans Arena shortly after 4 p.m. after efforts to vote down the rules for the quadrennial party convention failed. And while party bosses and pro-Trump delegates quashed the delegate rebellion, designed to air a grab bag of grievances and possibly launch a last-ditch effort to deny Trump the nomination, the ensuing pandemonium put a damper on the opening day of a convention that was supposed to showcase a unified Republican party.

After a marathon session to formulate the party’s rules spelled resounding defeat for anti-Trump and grassroots activists on Thursday, they launched a final stand on the convention floor to push for a roll call on the party rules. A majority of delegates from nine delegations submitted the required signatures to the secretary of the convention, said Rep. Steve Womack of Arkansas, who served as the presiding officer for the vote.

But RNC officials and Trump aides scrambled behind the scenes, pulling delegates off the convention floor to head off a broader and potentially embarrassing show of defiance.

For more than two hours Monday afternoon, senior RNC officials and Trump aides vigorously lobbied delegates who had signed the roll call petition to withdraw their names. After the Utah delegation chairman motioned for a roll call vote, it was ruled out of order because three of the nine delegations no longer had a majority of signatures submitted as a result of the backroom wrangling.

A roll call vote was considered more of a nuisance than a true threat to Trump. But a joint whip operation, which included RNC Chairman Reince Priebus and RNC Chief of Staff Katie Walsh as well as top Trump political aides, wanted to stave off a lengthy rebuke to the party’s rules and its presumptive nominee.

The backlash began in a routine Rules Committee gathering, when an effort by Alaska delegate Fred Brown to reopen debate on the convention’s rules was ruled out of order, clearing the path for a committee’s final vote after last week’s marathon negotiating session. Only about a dozen delegates on the 112-member committee voiced opposition, well below the 28-delegate threshold required to offer an amendment on the floor.

Facing certain defeat, anti-Trump delegates decided to drop their push for a so-called “minority report,” an amendment offered on the floor of the convention because it cannot pass the committee. Instead the rebels focused their efforts on using an obscure rule to push for a roll call vote to approve the party rules—the first time the measure has been used in decades.

According to organizers, a majority of delegates from at least 10 states and the District of Columbia called for the roll call vote under Rule 39 of the party’s temporary rules, which requires a recorded vote on the rules rather than a voice vote. If a majority of delegates on the floor opposed Trump, they argued, they could reject the rules with the roll call vote and require revisions, including potentially unbinding delegates and allowing them to oppose Trump when he is formally nominated on Tuesday.

When the floor fight broke out, the Colorado and D.C. delegations stalked off the convention floor. “Rigged election. Walk out,” read a text message from the group Delegates Unbound.

Opponents of the effort were as passionate as the rebels. “I will utilize my 55 years of law enforcement” to quell the revolt, said Sheriff Joe Arpaio of Arizona, a Trump supporter wearing a tiepin in the shape of a gun. “I don’t have a gun, but I have a tongue.”

The roll call push was led by two dissenting delegate factions, Free the Delegates and Delegates Unbound, the two organizations which tried and failed to rewrite the rules in a marathon session last week. In a text message to supporters they identified the delegations that called for a roll call vote as: Minnesota, Iowa, Washington, Colorado, North Dakota, Alaska, Virginia, Utah, Maine, Wyoming and the District of Columbia. It was not immediately clear which of the 11 delegations they listed were included in the nine petitions that were accepted or the six that were ultimately deemed valid.

The show vote was a desperate effort to register a grab bag of grievances, not just with Trump but also with Republican National Committee officials who successfully quashed the broader delegate revolt. Among the leaders of the effort—and most vocal critics when it failed—was former Virginia Attorney General Ken Cuccinelli, a top backer of Texas Sen. Ted Cruz. Cuccinelli was at the center of failed negotiations to weaken the party’s establishment in favor of the grassroots, an effort sanctioned by Cruz’s political organization.

“We will convalesce and develop a plan to make them take ownership and accountability for what they’ve just done to the grassroots,” said Colorado delegate Kendal Unruh, one of the leaders of the Free the Delegates movement and a Cruz backer.

One of the reasons for the confusion over the signatures was that convention secretary Susie Hudson, the designated recipient for the signatures required under Rule 39, was nowhere to be found as the convention’s house band played and RNC chairman Reince Priebus moved to continue the business of the convention. “They’ve been playing hide and seek,” said Washington State delegate Eric Minor, who was leading the collection of signatures from his state.

Not all of the effort’s supporters were motivated purely by antipathy to Trump. Steve Albertson, a Fredericksburg, Va., attorney, said he was motivated in part by the RNC’s procedural power play. “This is outrageous,” Albertson says. “This abuse of power is unprecedented.” Albertson, like other leading members of the Virginia delegation, had been a Ted Cruz supporter. But he grudgingly conceded that he would support Trump as the party’s nominee. “The only thing worse than nominating Trump is not nominating Trump,” he says.

The scene during the was reminiscent of a floor protest organized by pro-Ron Paul delegates in 2012 after a rules change meant their votes for Paul weren’t counted by the convention secretary. And it engendered the same kind of bitterness among the grassroots. “If the RNC breaks the RNC’s rules, then what do you do?” said Colorado delegate Ted Harvey. “You have no rules. It’s anarchy.”

The end of the Never Trump movement was met with a sigh of relief from the Trump campaign and the Republican National Committee, which spent the last several weeks aggressively whipping members of the rules committee and floor delegates. Teams of Trump supporters in matching green neon baseball caps and radio earpieces to respond to any signs of dissent.

Christian Berle, a D.C. delegate and one of the signatories, said, “Even those of us who support Donald Trump believe it’s only right for a roll call vote.”

Bruce Ash, an Arizona national committeeman and Trump supporter, compared the final nays to “the last ragtag elements of the Japanese army stranded on the island of Saipan for three years,” after World War II, saying the fight was over on Tuesday.

Earlier Monday, Trump campaign chairman Paul Manafort predicted that there would be no drama on the Republican Party rules or platform on the floor of the convention Monday. “There’s no more crushing,” Manafort told TIME. “All the juice has been squeezed out of that lemon.”

In a Platform Committee meeting, elected officials issued pleas for party comity. “Stop talking negative,” said Rep. Virginia Foxx of North Carolina. “We are united when it is important.”

But they weren’t on Monday.

Elizabeth Dias and Tessa Berenson in Cleveland contributed to this report. 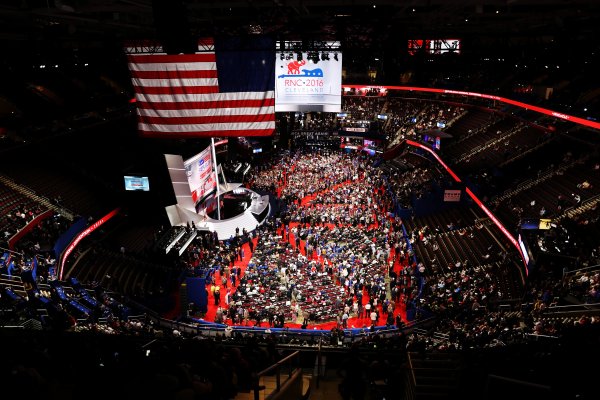