Dechia Gerald had feared for the safety of her husband, Baton Rouge police officer Matthew Gerald, when he worked long overtime shifts recently to monitor the demonstrations that engulfed the city following the police shooting of Alton Sterling. Whenever she voiced her worries, he remained calm, telling his wife that everything was under control.

“He reassured me, I guess, just enough to ease my fears,” said Dechia, 37, a mother of two young girls. “If he thought I was worried about it, I would get the extra hug and kisses.”

But on Sunday morning, Dechia Gerald’s worst fear came true: her 41-year-old husband was one of three police officers shot and killed in Baton Rouge by Gavin Long, a former Marine. Long had targeted the officers after posting podcasts denouncing recent shootings of black men by police and urging black men to make sacrifices as a way of fighting injustice. On Sunday, Long’s 29th birthday, he opened fire, leaving three officers wounded in addition to the three he killed.

“As hard as it is for me, I’m proud of my husband,” Dechia said on Monday. “He went down fighting and protecting.”

The couple, who celebrated their fourth wedding anniversary this month, had not directly discussed the recent police shootings, but Matthew Gerald had told his wife that the long hours patrolling the demonstrations were taking a toll.

“I remember him telling me, ‘I feel like I’m back in Iraq again,'” Dechia said.

Gerald served in the Marines and the Army, and deployed to Iraq three times. He joined the Baton Rouge Police Department last year as a way of continuing his service, and had just been released this month to work on his own without the supervision of a field training officer.

The couple had a 3-year-old daughter together, and Gerald had adopted his wife’s 9-year-old daughter from a previous relationship. In the last day of his life, Gerald was exhausted from working 16 straight days of 12-hour shifts, but still found time for his 3-year-old, who “was begging for his attention,” Dechia recalled.

Later that night, Gerald began gathering police paperwork that had been scattered throughout the house and organized it in a plastic tub. His sudden urge to put things in order caught Dechia off guard.

“He had been saying for weeks and months that he had to put all that stuff away,” Dechia said. “He maybe had a gut feeling he knew things were going to end.” 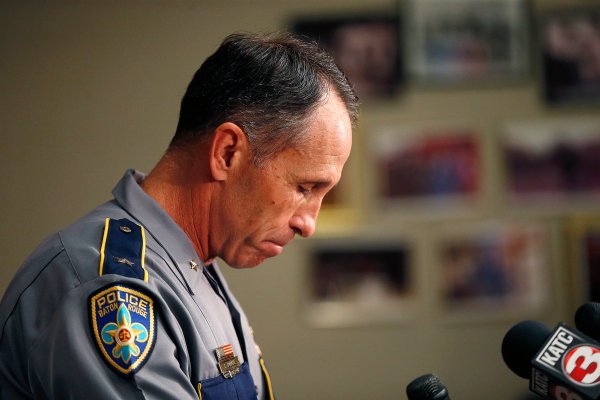 Baton Rouge Police Were 'Targeted and Assassinated'
Next Up: Editor's Pick