Stepbrother of Baton Rouge Cop Shooter Gavin Long: ‘I Didn’t Think It Would Reach This Point’

The gunman who police say targeted and killed three officers in Baton Rouge, La. on Sunday often expressed his anger at law enforcement and the injustices he felt black Americans faced, but his family never thought he’d lash out violently, his stepbrother said Monday.

Gavin Long, a 29-year-old former Marine from Missouri, died in a shootout with police officers after he opened fire on them outside of a convenience store in the southern city. Long killed three officers and wounded three others who were responding to a report of a man walking around with a rifle, authorities said.

“I’m really at a loss for words. I don’t know him to be what I saw yesterday,” Long’s stepbrother, Joshua Woodley, told TIME. “It’s very difficult to process what’s going on.”

Long called himself a “spiritual being” and had self-published three self-help books on how to live holistically and healthily, said Woodley, 24, of Missouri. Long was also passionate about his podcasts, in which he refers to himself as “Cosmo” and talks about the recent shooting deaths of black men at the hands of police officers.

“He didn’t express all of his anger to me. I could tell he was upset, of course,” said Woodley, citing his relative’s blog entries and social media posts. “I didn’t know the severity of it. I didn’t think it would reach this point today.”

Long, who wore all black during his assault on officers, “certainly was seeking out police,” Louisiana State Police Superintendent Col. Mike Edmonson said Monday, according to the Associated Press. “His movements, his direction, his attention was on police officers,” Edmonson said.

In one of his podcasts, Long says people need to do more than just protest, adding that all “successful” revolutions have come from “bloodshed.”

Long served in the Marines from 2005 to 2010, during which time he earned several awards, according to Yvonne Carlock, a Marines spokeswoman. He was promoted to a sergeant in 2008 and was deployed to Iraq, serving there from June 2008 to January 2009.

He was discharged honorably, and later attended Central Texas College and Clark Atlanta University, his stepbrother said. Long then moved to Africa, where he lived for about two years studying history and culture in Rwanda, Ethiopia, Uganda, Kenya, Tanzania, Egypt, Ghana and Burkina Faso, according to one of his books.

“He wanted to know more about African history, things that here in America they don’t speak about,” Woodley said. “It was very, very important to him.”

That’s where he penned his books, including his first one, The Cosmo Way: A W(H)olistic Guide for the Total Transformation of Melanated People.

Long and Woodley last spoke a few days before Long carried out his deadly ambush in Louisiana’s capital. Long had been in Houston to promote his books, his stepbrother said.

Long had changed his name to Cosmo Ausar Setepenra last May, Reuters reports, citing public records. He also had pledged affiliation to the Washitaw Nation, an African-American offshoot of the anti-government Sovereign Citizens Movement, according to the news agency. 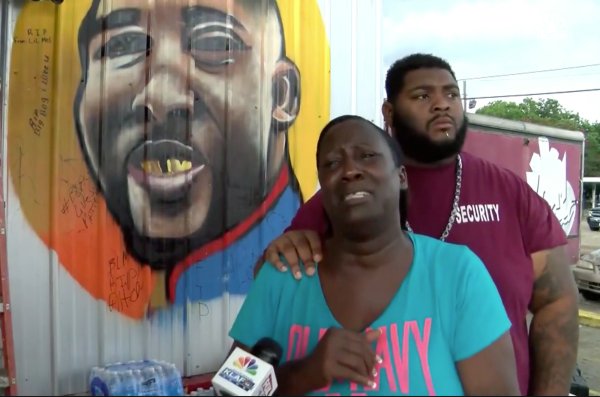