Banners with photographs of President Recep Tayyip Erdogan hang from the roof of a commercial building alongside the national flag in Istanbul, Turkey, on July 18, 2016.
Ismail Ferdous—Bloomberg/Getty Images
By Jared Malsin/Istanbul

Over the last several years, Turkish President Recep Tayyip Erdogan has survived massive protests, tumult within his own party, an electoral setback, terror attacks and an armed insurgency by Kurdish separatists. But on the night of July 15 he survived the most serious and violent challenge to his authority yet: an attempted military coup. As the government continues to reassert its hold on power in a traumatized nation, profound questions remain about where Turkey goes from here. And the answers will come from the person who, for a moment just a few days ago, seemed destined to be removed from power or worse: Erdogan himself.

Turkey’s political parties, key government institutions,and much of the public at large sided against the coup, uniting an otherwise deeply divided country, but the question now is how long a rare moment of consensus will last. On Friday night some of Erdogan’s bitterest enemies stood by him. All four major political parties, including the nationalist, centrist, and left-wing opposition, rejected the putsch. In a parliament where only weeks earlier lawmakers engaged each other in a physical brawl, there was unity.

Responding to an appeal from Erdogan—made on FaceTime and relayed via CNNTurk—demonstrators took to the streets, facing off with soldiers who had been to enforce the power grab. Some of those protesters were killed, among the 280 people who died that night. At the same time the instigators of the coup failed to mobilize popular support or bring on board other key institutions within the state. No pro-coup protesters appeared to confront those opposing the soldiers and tanks in the street.

The government is now moving to purge the state of what is says are the participants and perpetrators of the coup. As of Monday at least 7,543 suspects had been arrested, according to the prime minister. At the moment the clampdown is focused in part on the plotters and the followers of Turkish cleric Fethullah Gulen, currently in self-exile in the U.S., whom the government blames for the coup. (Gulen has denied any role.)

In an interview with CNN released on Tuesday, Erdogan said the coup attempt was an act of “treason” and that he had an obligation to act against those responsible. “We’re talking about a situation in which 280 people lost there lives, most of them civilians; 1,500 were injured, more than 150 whose condition remains critical. The people itself brought me to this position. The people will hold me accountable if I do not do anything, rightfully so.”

But human rights groups are concerned that the clampdown is being carried out without due process and political opponents fear the government could squander the moral high ground it gained after the coup by attempting to further centralize power.

Read More: What to Know About the Group President Recep Tayyip Erdogan Is Blaming for Turkey’s Attempted Coup

“I think that’s the burning question on the minds of the opinion leaders and the society at large and the opposition as well,” says Nigar Goksel, an senior analyst on Turkey at International Crisis Group in Istanbul. “Is this going to create a realization that we have to come together around a vision that is more inclusive or is it just going to be an instrument to fuel nationalism and Islamist fervor even more? The people did what they needed to. They stood by the government. They showed political maturity. But now the ball is in the court of the government to reciprocate.”

The country is still reeling from the violence of the coup attempt, when military units attacked an intelligence headquarters and raided Erdogan’s hotel in the coastal resort town of Marmaris where he was on vacation with his family. Speaking to CNN on Tuesday, Erdogan said, “Had I stayed 10 or 15 additional minutes there I would have been killed or I would have been taken.” As he flew to Istanbul, fighter jets harassed his personal plane. An explosion shook the parliament building, reportedly killing 12, while soldiers invaded TV studios and troops fired on unarmed demonstrators.

Soldiers involved in the coup attempt surrender on the Bosporus Bridge in Istanbul, Turkey, on July 16, 2016.
Gokhan Tan—Getty Images

Events on Monday underlined the sense of ongoing crisis in Turkey. The government still faced pockets of resistance from alleged coup supporters. In Ankara, a soldier opened fire before being arrested. On Sunday night, police fired warning shots after suspected coup participants resisted arrest at one of Istanbul’s airports, the government said.

Prior to the failed coup, Erdogan’s administration had been readying itself for an ambitious political project: transforming the Turkish state from a parliamentary system to a presidential system. The government says the change is necessary to revise an outdated constitution and end the shifting coalitions and instability of parliamentary governments, but critics are wary of a any move that would give allow Erdogan expand the powers of his current office in a state where the parliament and prime minister previously held sway. In June Erdogan also approved a measure that strips legal immunity from members of parliament, a step that could pave way for prosecutions of opposition pro-Kurdish lawmakers, who the government accuses of supporting terrorism.

In the aftermath of the military insurrection, the government says it still plans to implement a presidential system, but the immediate concerns of the coup’s aftermath took precedence over long term goals. “Right now, our priority is to treat the wounded, bury the dead and bring to justice the people who bombed the parliament three days ago,” says a government official in a text message to journalists.

Women react during the funeral ceremony of Sehidmiz Murat Inci, a victim of the coup attempt, at Kocatepe Mosque in Ankara, Turkey, on July 18, 2016.
Dimitar Dilkoff—AFP/Getty Images

Over the last year, worsening political violence had deepened divisions within Turkey. The Turkish state just engaged in a massive confrontation with Kurdish separatists that left hundreds dead and displaced more than 350,000 others in the southeast of the country over the last year. Turkey was shaken by an escalating series of militant attacks, by both militant Kurdish groups and ISIS, culminating with a suicide assault on Istanbul’s main airport in June which killed 44 people. Partisans of the rival political camps—nationalists, Kurds and leftists, Islamists, and secular Kemalists who adhere to the ideals of Mustafa Kemal Ataturk, the founder of the Turkish republic— viewed each other with suspicion, if not contempt. Following prosecutions of academics and steps to constrain critical media, opponents accused Erdogan of transforming Turkey into an autocracy.

Many in the opposition blamed Erdogan for dividing the country, and so place the onus on the president to use the moment of national unity wisely. Selahhatin Demirtas, the leader of the leftist, pro-Kurdish People’s Democratic Party, was among them. In a message tweeted by his party, he made reference to the June 7, 2015 election when Erdogan’s Justice and Development Party momentarily lost its majority in parliament, only to regain it in a snap election in November 2015.

“This attempted coup once again has brought the chance to make use of the opportunity missed in June 7 for #Turkey,” said Demirtas, adding “A progressive democracy does not appear by itself, just because the coup attempt was unsuccessful.” 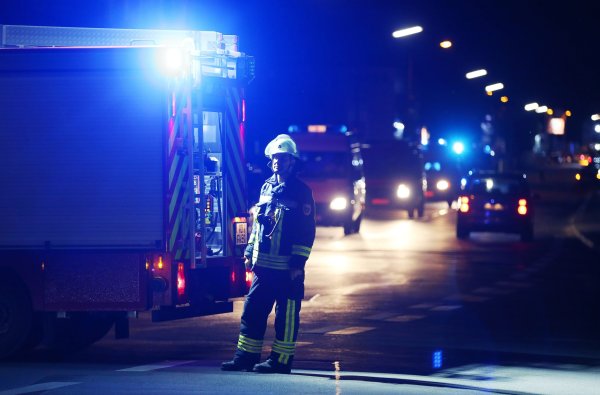 At Least 10 Injured After Axe Attack on German Train
Next Up: Editor's Pick